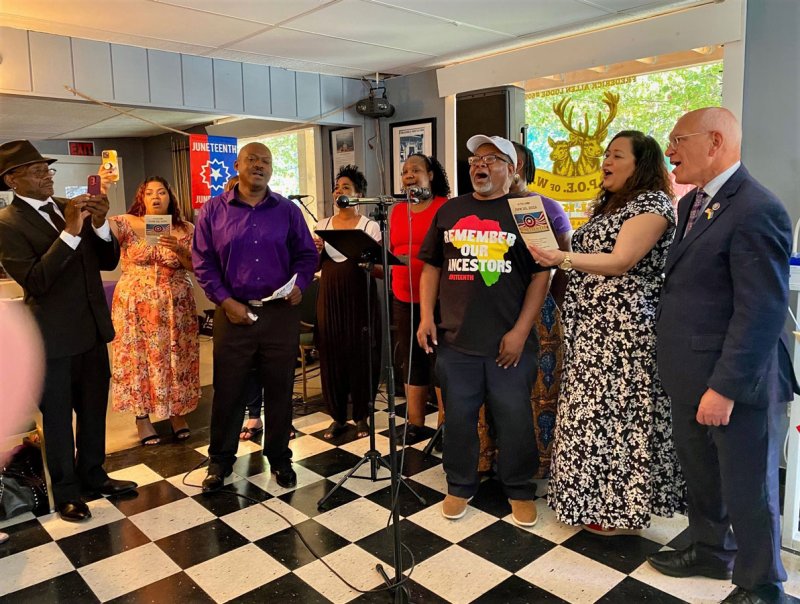 The “Juneteenth Celebrate Freedom” event, commemorates the end of slavery in the United States, marking the anniversary of June 19, 1865. Juneteenth became a federal holiday in 2021.

“It’s great to be here, but would have made it even greater is if we never had to have this holiday – slavery, the Civil War and the continuing fight over just plain justice for everyone,” Saratoga Springs city Mayor Ron Kim told those assembled for the event. “Being here is part of that fight.” Former city mayors Ken Klotz and Joanne Yepsen, current council member Minita Sanghvi, and current Congressman Paul Tonko were among those who attended Monday’s event.

Among those at the mic: Ethan Crowley performed his rendition of Bob Marley’s “Redemption Song,” actor/director and educator Eunice Ferreira – read adapted speeches of Ida B. Wells.

The Lodge was chartered in August 1925 and the woman’s auxiliary one month later, according to city historian Mary Ann Fitzgerald. Meetings were initially held in members’ homes, then for several decades on Congress Street, when a physical venue was sited.

During the mid-20th century, the Urban Renewal movement demolished much of the Congress Street area where a black community of homes and businesses stood. The physical location of the Lodge changed as well - relocating to Beekman Street after the Congress Street venue was destroyed in a fire in 1966.

Kendall Hicks, leader of the Frederick Allen Lodge, welcomed the entire group to the front and closed out the day’s ceremony with a rousing chorus of “This Little Light of Mine (I’m gonna let it shine),” which came to be known as an anthem of the civil rights movement during the 1950’s and 60’s.

More in this category: « Saratoga County Hires Its First Environmental Director Preservation Foundation: Work Underway at 65 Phila »
back to top