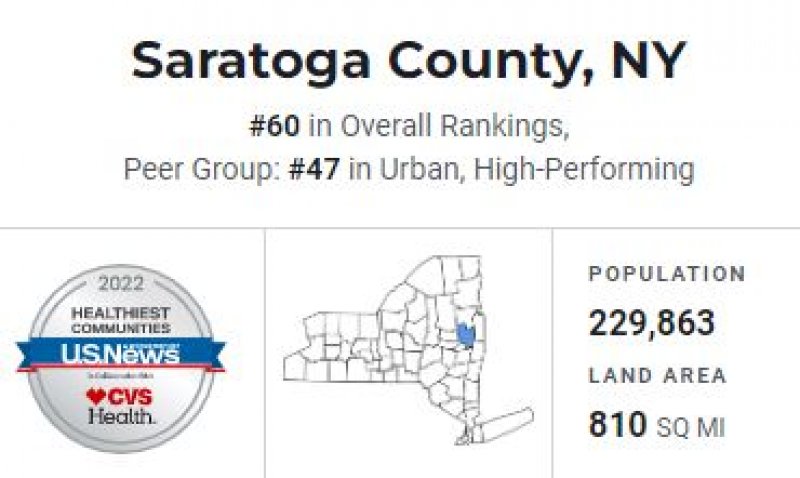 A U.S. News & World Report community ranking released this week names Saratoga County at number 60 in the country and #1 in New York State.

SARATOGA COUNTY — A U.S. News & World Report ranking nearly 3,000 U.S. counties and county equivalents in 89 metrics across 10 health and health-related categories has named Saratoga County at number 60 in its overall rankings, and tops in all of New York State.

The broad framework of categories and subcategories is based on factors key to evaluating community health that were identified by the National Committee on Vital and Health Statistics – a policy advisory board to the head of the U.S. Department of Health and Human Services – as part of its Measurement Framework for Community Health and Well-Being.

The top 3 ranked communities in the country, according to the report are: Los Alamos County, New Mexico; Falls Church City, Virginia, and Douglas County, Colorado.

Nassau County, at number 98, was the only other New York community to rank in the top 100. Of Saratoga’s neighboring counties which made it to the top 500, Warren Country was ranked at number 357 overall, Albany County at 444, and Rensselaer County at 442.

For an in-depth analysis and the complete Healthiest Communities Rankings of 2022 list, go to: www.usnews.com/news/healthiest-communities/rankings.