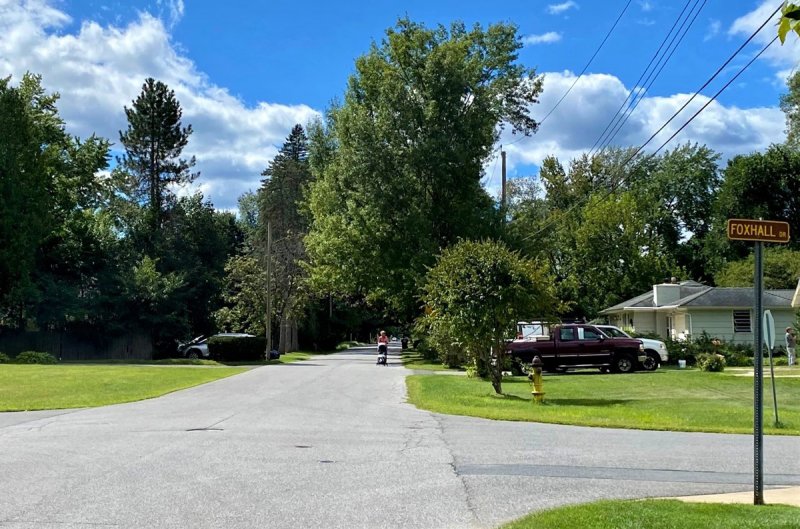 SARATOGA SPRINGS — Residents who had attended several City Council meetings to advocate for safer passageways for young students attending Caroline Street Elementary School were pleased to learn this week that the city announced it will be installing pedestrian sidewalks along a five-block stretch east of the school, where no sidewalks currently exist.

“Nearly every time I drive on this stretch of Caroline Street, I have to drive into the opposite lane of travel to avoid pedestrians in the road,” said Olivia O’Malley, who was accompanied by her second-grade daughter, Carlin, at a gathering during the Sept. 1 announcement.  O’Malley said that once her daughter started attending kindergarten at the school, her perspective grew to a new realization for the “absolute necessity” for sidewalks.

“Once you walk with your 5-year-old on this narrow, two-way road with no shoulders and parking allowed on both sides… there is no denying the need,” she said, adding that wintertime snow piles create an even more precariously narrow passageway for pedestrians.

The sidewalks will be installed along the north side of Caroline Street on a stretch of road that runs five blocks from Schuyler Drive to Foxhall Drive.

“These are our tax dollars and it’s a pleasure to bring them back to the community to make such an important difference in the lives of our youngest members, and to help the keep the anxiety levels of our parents down considerably,” Woerner said.

Golub thanked Woerner – “without her support this project wouldn’t have been possible” – as well as parents and residents who came to City Hall to bring the issue to the City Council.

“This sidewalk project is something you fought for, both yourself and other families,” Golub said. “There is nothing more important than the safety of our children. When children and families are walking home from school in the street without the safety of sidewalks, we have not done our best.”

The overall project will include the installation of new sidewalks, curbing, and storm water infrastructure to limit drainage issues along Caroline Street. City DPW will conduct the work which is anticipated to take place later in the school year.

More in this category: « Things That Go Smash In The Night Work Underway at City Intersection, Road Closure a “Major Nusiance” »
back to top