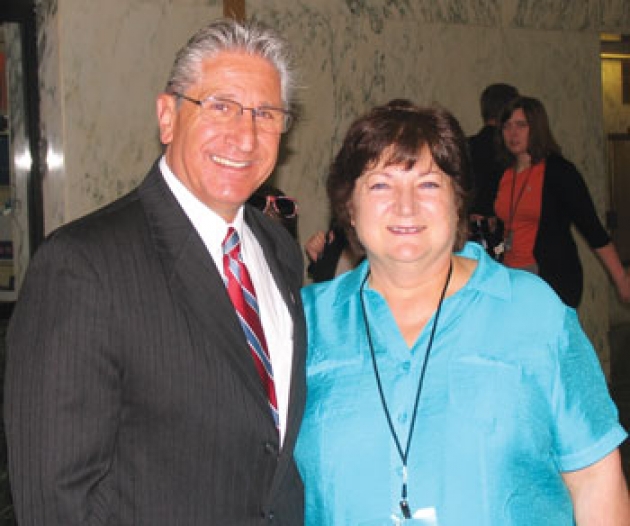 Susan Wagner, President and Founder of Equine Advocates, poses with Assemblyman Jim Tedisco, who will be honored at the 12th Annual Equine Advocates Dinner and Charity Auction. Photo by Sue McDonough.

SARATOGA SPRINGS — In February of 1996, Susan Wagner made a crucial step toward the protection of horses. She founded Equine Advocates, a sanctuary to help rescue Thoroughbreds, ponies, donkeys and mules from slaughter and abuse.

“These are animals that had nobody,” said Wagner, the current President of Equine Advocates, located in Chatham. “Most of them have problems. They’re not able to be ridden. Most of them have physical or behavioral problems from being abused. They have a lot of baggage, so this is the place to handle it.”

“Horses are so tightly related to everything that happens in Saratoga Springs,” Wagner said. “From the racing, to polo, to many different kinds of Equine events. You walk down the street and everything is very horse oriented.”

This year’s honorees at the event that gives animals a voice are Assemblyman Jim Tedisco and Sackatoga Stable’s Jack Knowlton.

“Tedisco is probably the greatest advocate for animals currently serving in the New York State legislature,” Wagner said. “He is now working very hard to ban the slaughter of horses in and from New York State. We’re a border state with Canada; we are a pathway for all kinds of vehicles going to slaughter.”

Tedisco is striving toward joining the likes of California, Texas, Illinois and most recently New Jersey as states that have banned horse slaughter in legislation.

News 10 ABC-WTEN Meteorologist Steve Caporizzo, who hosts the Albany Animal Advocacy Day, will be presenting Tedisco with the award.

“[Knowlton] has gone out of his way to lobby and be totally against horse slaughter,” Wagner said. “That’s so important because we need the horse industry to come out against it. We’re having someone who’s won these big races. Having a person like that as an ally and one who is so active and working so hard to get this done makes him a candidate for the award, which we’re very happy to be giving him because he deserves it.”

Knowlton has been the Operating Manager of Sackatoga Stable since 1995, serving as the racing manager for their Thoroughbreds, including 2003 Kentucky Derby and Preakness winner Funny Cide. He also served on New York State’s Task Force on Retired Race Horses from 2008-2011.

“As a longtime race horse owner, both Standardbred and Thoroughbred, I am dedicated to the cause of preventing the slaughter of these wonderful equine athletes and securing suitable second careers or homes for them following retirement,” Knowlton said.

Their will be a variety of auction items up for grabs next Thursday evening including a Kentucky Derby Experience for Four in Lexington, an exclusive Harbour Town Golf Vacation at Hilton Head for six, two tickets to New York’s fall fashion week, a four person trip to a Yankees game and Broadway Show with a stay at the Mandarin Orientel Hotel, a Bubbles & Lingerie package and an 18k white gold Tiffany & Co. horseshow pendant with round diamonds.

“We’ve never had gifts like this,” Wagner said. “The gifts this year are absolutely sensational.”

There is also a chance for four people to win a private box in the Saratoga Race Course Club House on Sunday, August 4 for Funny Cide Day at the Track.

The first race Wagner ever attended was at the Belmont Stakes in 1973 when Secretariat won the Triple Crown by 31 lengths. The very next day she got a job at Belmont because of her love of horses and began a 15 year career in the racing industry before starting Equine Advocates.

“To me, humane education is really where it’s at,” Wagner said. “With the 83 horses that we have here, we could triple that number if we had the room. While we can’t rescue every horse, making people aware of what they can do and making them aware of what the special needs of horses are so that they can know what to expect is helpful. It’s also so that people can do their own rescue. We can give people the tools.”

Tickets are $250 per person with front tier tables at $500 per person at this year’s New York, New York themed event. All of the money raised will go to the rescue and needs of the horses.

More in this category: « Winners Crowned at 22nd Annual Hat Contest A Message in a Name—Thank You Marylou »
back to top