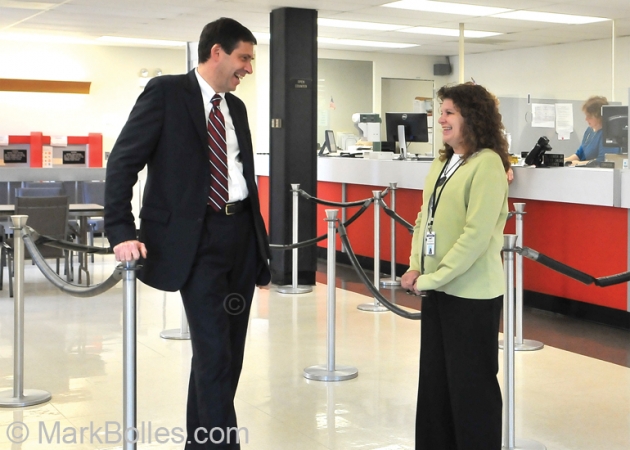 BALLSTON SPA – Peter Martin was sworn in as Saratoga County Clerk on April 17, 2013. Governor Andrew Cuomo appointed him to fill the vacancy when Kathy Marchione was elected to the New York State Senate’s 43rd District. Now six months in, Martin is able to provide perspective and an assessment of his office’s relevance to the lives of every Saratoga County citizen.

The Saratoga County Clerk is an elective office, as it is in 57 out of the 62 counties in New York State. This is notable because, although the nature of this position is more administrative than “political,” Martin is a Democrat and Marchione is a Republican who headed the county clerk’s office for 16 years before her election to the state senate. In that spirit of bi-partisanship, Martin begins by acknowledging his predecessor. “Let’s face it. I inherited an extremely well-run office staffed by many dedicated people.”

Nonetheless, one cannot overestimate the impact that a fresh set of eyes can bring to an existing situation, or the ability to transmit private sector expertise and good business practices to a long-standing public sector institution. With a background as a Senior Vice President and General Counsel for Ayco financial services, Martin has brought about changes that have served to maximize the revenue that comes into his department, and in turn, into the Saratoga County budget.

The County Clerk is responsible for administering three major areas: Department of Motor Vehicles (DMV), court records and land records (such as deeds and mortgages). In 2012, their gross receipts were a robust $80 million. After passing through fees to the state and other entities, the clerk’s office contributed about $8 million to the county budget, or about 4 percent of total county general fund revenue.

At the DMV, which had gross receipts of about $57 million last year, Martin has instituted policies for more efficient turn-around of titles for auto dealers, setting a seven-day standard. This policy “now has dealers from New York City and beyond teaming up and literally bringing us vanloads of paperwork,” Martin said. Each title registered at the Saratoga County DMV puts cash in the county’s coffers.

Martin has also begun a campaign to encourage and reinforce the decision by county residents to renew their licenses and registrations in person at a Saratoga County DMV office rather than online. Why? According to Martin, a little-known quirk in state legislation dictates that “when a person renews online, the county receives a maximum of 4 percent of the fee, sometimes nothing at all,” Martin observed “but with an in-person transaction, the clerk’s office gets 12.7 percent.”

“We have instituted a policy where each clerk not only thanks the customer for their in-person business, but explains the revenue difference. So we encourage people to visit one of our convenient offices in Ballston Spa, Wilton or Clifton Park and help keep the money here,” Martin said.

Another policy was procedural and more in the potential loss prevention category than revenue enhancement, but important nonetheless: “At each DMV branch, we handle substantial cash on a daily basis. Years ago, our bank stopped offering armored car pickup,” Martin said, “so when I arrived at the clerk’s office, I discovered that we were sending out an unescorted DMV employee with just a bank bag. As you can imagine, this is a major potential security risk.”

“I immediately got on the phone to Sheriff James Bowen,” Martin said, “he agreed that ‘this cannot happen’ and took instant action.” The bottom line is that the DMV employees at each branch are now escorted to the bank by a sheriff’s deputy in the deputy’s vehicle.

Other policies instituted have to do with internal accounting procedures to save time in tracking down shortages. As the county is under a hiring freeze, Martin notes saving time is literally saving money.

Martin’s appointment to the county clerk’s office will end on December 31. He will not seek another term, opting instead to run for one of the two Saratoga County Supervisor seats representing the City of Saratoga Springs.

It is a given that Kathy Marchione was indeed a tough act to follow. It appears that Peter Martin, despite his short time as Saratoga County Clerk, will be regarded that way by his successors as well.