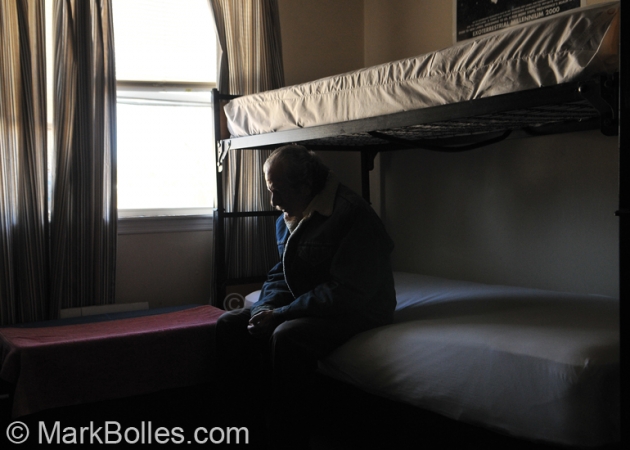 SARATOGA SPRINGS — Barry Potoker, Executive Director of Saratoga Builders Association, was a participant in “A Day Without A Home” on Wednesday, November 20 sponsored by the Saratoga County Housing Committee which commemorated Hunger and Homeless Awareness Week. He was given the profile of “Eric” and went through the intake process at the Shelters of Saratoga (SOS). This is his account:

I never thought that it could ever happen to me, but it did. It was a surreal experience and happened so fast. My girlfriend of several years kicked me out of her house with just the clothes on my back. I had no where to go or live. I had officially become homeless.

My name is Eric and I’m 27. I do have a decent job at a restaurant working for minimum wage and unfortunately I have been battling chronic bronchitis for many years. Needless to say, I have no health insurance. My situation felt desperate and I had nowhere to turn. Embarrassed and ashamed, I showed up at the Shelters of Saratoga for help.

I was welcomed by a reassuring woman at the front desk and immediately turned over to a case worker. His name was Graham. In my uneasy state, he was encouraging, knowledgeable and supportive. We spent about a half hour reviewing the rules of the Shelter, filling out some paperwork, and most importantly talking about all the resources at my disposal to help get me back on my feet in 60 days or less. A sense of hope and relief came over me as I was accepted into this temporary home.

Because I came to the Shelter, many services from other organizations and agencies were now available to me. I was eligible to have my bronchitis treated at the Saratoga Community Health Center run by Saratoga Hospital. I received a complimentary three-month membership to the YMCA. In addition, I was given a $50 certificate to obtain some more clothes at Treasures. If I had been a veteran, the Saratoga County RPC was ready to assist me. The critical element would be the ongoing work with my case worker to help me find an affordable apartment and look for a better job if I so desired. Graham showed me around the house, the community computer, living room, and the kitchen where all the folks staying at the Shelter cook for themselves. He then took me to my small, but comfortable room with bunk beds, which I will share with three others in transition situations similar to mine. This will be my place to begin anew. On the way however, we did make a stop at a closet brimming with clothes, for me to pick out some extra things to wear. I was so very fortunate to be in a caring, safe place to help me get through this difficult and scary time in my life.

My time taking part in “A Day Without A Home” was both enlightening and worthwhile. Not only did I feel the despair and helplessness of being alone without a home, but I was introduced to a world of unknowns and possibilities for those in need. Yes, my awareness of this unfamiliar topic (to me) was truly enriched.

There was an evening wrap-up event at the Saratoga Arts Center focused on those who volunteered to participate in this special day. They each spoke of their personal “homeless” experiences and provided some meaningful insights of the various agencies. The Skidmore College Dance Improvisation class even performed a demonstration of abstract emotions, thoughts and ideas relative to homelessness and the associated challenges. It was excellent and moving to say the least. And to top it off, we had a homeless couple right from the street join us during the event. They sat in the crowd listening to us talk about the subject matter, jumping in from time to time. It was an incredibly sad yet sobering night for us all.

On a final note, as I was leaving the Shelters of Saratoga, something happened that was quite profound for me. I passed a man that attended high school with me entering the Shelter. He did not look well, but I still recognized him. He not only appeared homeless but the receptionist had already called 911 to get an ambulance for him. The day certainly had a personal impact on me.