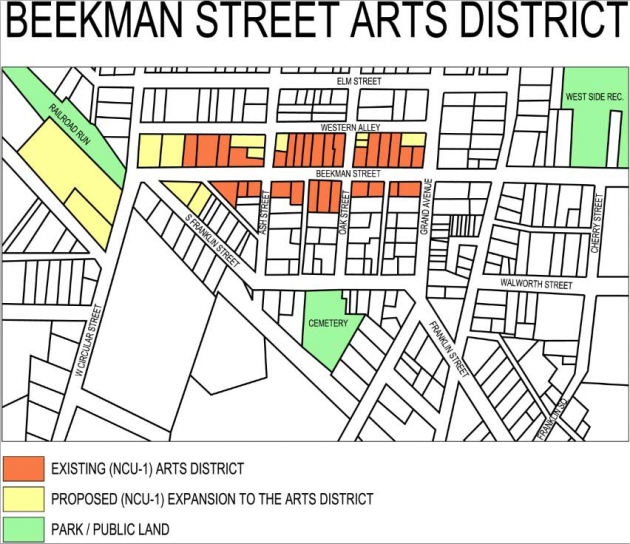 SARATOGA SPRINGS-- The rezoning proposal that would expand the Beekman Street Arts District was presented to the Saratoga Springs Planning Board Wednesday night and was issued a negative referral for too wide of scope and too small a demand for the alterations presented in the proposal.

The Planning Board served in its capacity as an advisory role having voted 5-0 against the endorsement of the proposal.

“When this project first came in front of us last year,” said Board Member Clifford Van Wagner before the Board turned the discussion over to public comment. “I consistently stated that the arts district needs to fix what they have before they do an expansion, and just before this meeting I drove down the street and saw the same empty store fronts that I saw back in the fall.”

“I’m supportive of having less regulation, not more,” he added. “So conceptually what they’re asking for, I would support. However they haven’t had much demand (from the artist community). So the demand isn’t there and they’re looking to put the supply before the demand was there. Again I understand that expanding the area is to attract business: it becomes a matter of degree.”

The Planning Board decision is only referral. Subsequently, the City Council can still vote in favor of the rezoning proposal. Planning Board member Robert Bristol and Chairman Mark Torpey recused themselves from the meeting because of potential conflicts of interest. Tom Lewis was the acting chairman of the board that night.

Packed on the benches and lining the walls of the second-floor room of City Hall, members of the community turned out to defend their stake and to have their say in the process of the Planning Board’s recommendation. Many of the views during public comment, whether they were for or against the rezoning proposal, were in favor of evaluating a more “suitable approach to what will work to revitalize the district”: as one community member said.

Several grounds for disagreement drove public comment. One of those was parking. Some individuals said that there were existing issues regarding parking on and around Beekman Street and that adding commercial zoning to the mix of a predominately residential neighborhood would further decrease the number of available parking spaces.

Beekman Street Arts District Founder Amejo Amyot said during public comment, that the Beekman Street Association and the City Council were currently in talks on the creation of additional parking where the Spa City Recycling is currently operating.

The comments continued to other themes including the waiving of city oversight for commercial businesses in the Neighborhood Complimentary Use-1 (NCU-1) and within the “Creative Arts District”. Zoning changes under the NCU-1 would allow for art studios, art galleries, retail and service establishments under 2,000 square feet; restaurants with less than 40 seats; offices with less than 2,000 square feet on upper floors only and open air markets to move into the Arts District without a special use permit. Special use permits in the NCU-1 that would be required for retail and service establishments exceeding 2,000 square feet; offices on the first floor, bed and breakfasts and outdoor entertainment.

The “Creative Arts District” overlaying the NCU-1 and covering the surrounding parcels includes waiving of special use permits or site plan review within existing structures for artist studios, art galleries, retail and service establishments – all within 2,000 gross square feet.

Amyot said: “The purpose is to bring more vibrancy. Our vision was to recreate the once thriving neighborhood of the West Side. In the overlay area of what we are encouraging is a live work-residential area for our artists to develop a community of the arts.”

The other side of this situation is a fear of the unknown. Some individuals who live within or adjacent to the “Creative Arts District” opposed the waiving of site plan approval and commercialization because it would change the environment they called home, and the reason the selected to move into the area in the first place.

“If you live there you do not want to have the uncertainty of knowing what commercial enterprise is going to be moving in next door,” said Frank Capone, a resident of Dublin Square. Dublin Square is on the opposite side of Grand Avenue where the “Creative Arts District” does not reach. He and another community member said that when they first moved in, after a period of due diligence, they chose to buy property in the West Side because it is designated as a residential zone.

The final count for community members that spoke either against the rezoning proposal or in favor of it was 14-8, respectively. “What we’re talking about is the arts, but what we’re worrying about is commercialization,” Capone said.

More in this category: « The Wine Bar Uncorks New Menu Reporters View: A Facebook Feelgood Story »
back to top