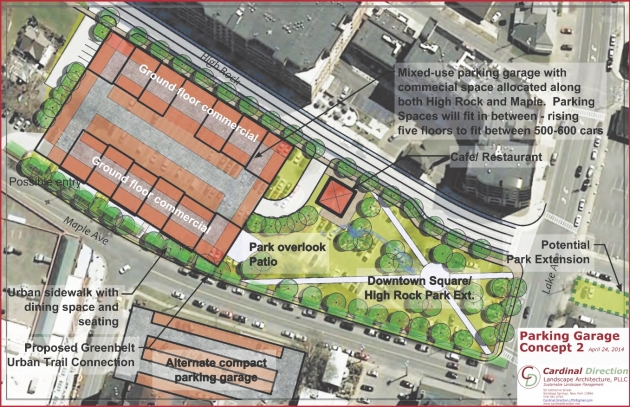 A Fresh Approach To Urban Planning?

“It would be shortsighted to rush something through.”

SARATOGA SPRINGS – The reveal of the Saratoga Springs City Center parking structure plans last week has brought about a mixed bag of reactions.

Some like it, others don’t. Some, like the Pedinotti family, owners of the Mouzon House, a beloved restaurant housed in a historic building (home to Saratoga Springs’ first family of color) believe that the placement of the structure literally squashes them in the shadow of progress and places their future viability in jeopardy.

“If this goes through as is, we don’t think it’s likely that we’ll make it to next summer.” Co-owner Diane Pedinotti said.

Whether this is the case or not remains to be seen, but no one denies that there will be a negative effect on their business – a five-story structure 75 feet away that literally blocks out the sun at times cannot help but have an impact.

For his part, Mark Baker, President of the Saratoga Springs City Center, has expressed that he has reached out to the Pedinotti’s to try to modify the plans for the structure to the extent possible, yet he acknowledged that their were both economic and engineering restraints that needed consideration.

Saratoga Springs Commissioner of Finance Michele Madigan, reached by phone, indicated that she intended to look at all aspects of the parking structure proposal: from a financial, design and residual impact standpoints. “By no means should anyone consider this a done deal at this point.”

If that is the case, perhaps the citizenry of the city should participate. Perhaps, since the entire parcel (bordered by Lake, York, High Rock and Maple Avenues) is on city owned land, and represents the last great parcel in the Downtown core, a fresh look at this important parcel is in order.

On his own, Mr. Sprengether (a landscape architect whose firm, Cardinal Direction, is on Catherine Street) developed a few conceptual designs that were shared (via Harry Moran of Sustainable Saratoga) with both Mark Baker and the City Council at its Tuesday, June 17 meeting.

Mr. Sprengether noted “…these concepts are simply to be used to start a public conversation within the City of Saratoga Springs in order to identify how to best utilize this vital piece city owned property so that it contributes to the positive growth our city's urban fabric and economy.”

Sprengether’s concepts incorporate increased parking, which everyone recognizes as a necessity. It also includes park increased parkland, in some cases retail space and one iteration even includes reclaiming the original water source that was covered up nearly a half-century ago in the name of “urban renewal.”

The Pedinotti’s have reviewed these concepts and have stated that each incorporates elements that would be more favorable to the Mouzon House’s future viability. Yet, Sprengether admits that these concepts have not been costed out, and that they might be unfeasible either from an engineering or economic standpoint, yet “…the intent of these drawings is to illustrate a few of the wide range of potential site plans for the project site…. development of the current surface lots offers a tremendous opportunity to our City and we should make informed choices as to the direction we want our City to grow.”

At this point, we truly have more questions than definitive answers, but given the critical location of the city’s last great downtown parcel, many citizens have expressed the desire that these questions be asked – in order to determine the best solutions for development. Development that is done in a manner that incorporates critical needs like parking – yet is done in a manner that Saratoga Springs would be proud of.

Along that exploratory path are relevant issues such as whether retail could and should be part of the mix. There is the benefit of increased sales tax from this, yet it is obvious that neither the City nor the City Center has the desire or the wherewithal to be a retail landlord. A commercial developer would have to be brought into the mix.

As far as the park extension scenario’s, the reclaiming of the water underneath, there is support for this, from what might be surprising quarters to some:

“I like them.” said Mark Baker, referring to the park concepts. “I hope the City looks into doing some of them.” In fact, it must be remembered that this is all City land – in effect, the people’s land, which represents an opportunity.

Mr. Baker speaks from the perspective of a forthright advocate for the City Center, yet, as both a member of Sustainable Saratoga and a past President of the Downtown Business Association he balances his advocacy with a larger view. A view of a complete downtown everyone can be proud of, with amenities like parking and parks in sufficient supply.

If in fact, as Commissioner Madigan states, it’s not a “done deal,” the time to make your voices heard on downtown’s last great parcel is at hand.

More in this category: « iRun LOCAL: Inspiring Runners While Serving the Community Reader’s View »
back to top