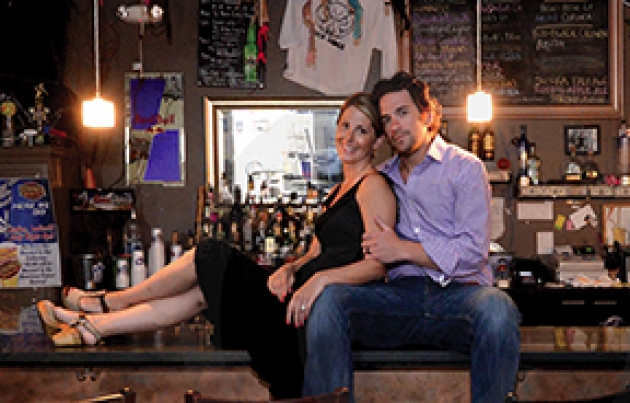 SARATOGA SPRINGS – Any business that makes it to five years deserves props. But in the music business, you have to count it like it’s dog years.

Suffice to say, Putnam Den (63A Putnam Street, Saratoga Springs), has in five short years, established something that was not seen in this town in, well maybe, forever.

A music venue where the emphasis is on original artists.

Notice that we did not state a genre. Putnam Den welcomes them all – from rock to reggae (and yes, even hip-hop sometimes). Notice further that we said artists, not just musicians – Co-owners Tiffany and Jonathan Albert have welcomed painters, poets and probably Papier-mâché practitioners inside their roomy, comfy confines.

“There’s still a lot of misconceptions about what we do,” Tiffany said. “People think we’re a dance club, a hippie club, a this club, a that. They think we’re only a high-cover price venue, when in fact on those nights we have a national touring act the ticket price goes to the band. We have a very-high percentage of absolutely free shows.”

Putnam Den is impossible to pigeonhole, and that’s by design. An example of a superior original free show series would be beginning on July 9, when Gubbulidis, a duo from Castleton, VT that featuring members from Twiddle Zdenek Gubb and Mihali Savoulidis establish a Wednesday residency throughout the summer. During track season local legends Half-Step will also perform on Thursday evenings – also free.

It would have never happened, let alone reach the precipice of a fifth anniversary, without the shared vision and acumen of Tiffany and Jonathan. Tiffany is one of the most discerning, dedicated evaluators of talent I have ever met; Jonathan has a background that is a mélange of expertise that ranges from hospitality management to the performing arts. But even with that going for them, they credit (more than) a little help from their friends.

But not the banks. It was 2009. The recession. Banks weren’t lending money to hospitals, let alone a fledgling dream involving music; don’t even waste the paper and ink filling out the application! “We got our liquor license on a Thursday, opened the night after.” Jonathan said. “We had exactly $16 in our checking account” after they emptied their savings on permits, sound equipment, paint and supplies.

“When we put our financial plan together,” Tiffany said, “our accountant at the time said ‘it’s my professional obligation to talk you out of this’, but I told him: ‘this ship is going to sail!’”

You don’t get to five, though, without some help, and the Albert’s received a lot from both the business and local government communities. They rattled off names in such rapid fashion I could barely keep up; some might be a surprise:

“Jake Hogan, Tony Ianello, Peter Beames, Bruce Levinsky, Patricia Berry, Kevin Saxton, Dan Cogan in the building department, Stephanie in the city clerk’s office, Steve Ellwanger our C.P.A., Dave Harper, Julie Francis…” they said. If I left anyone out, the fault is mine, not theirs.

In addition to this, they salute the loyalty of their staff. “We have had surprising little turnover.” Tiffany said. “What makes me happy is that they make it more than a ‘bar job’. They buy into what we are doing, and use there work here as a platform to achieve their life’s goals.”

An example of this is Brian Petroski, one of the “core four” on the staff during their five years. Brian is one of the most accomplished abstract painters you will ever see, and he’s living right here. In fact, he deserves a plug of his own: visit brianpetroski.artspan.com.

Further, they have bona-fide crowd pleasers like Sam Bottini (who has been there from the beginning) and Lauren Cognato, as well as Emily Hill, who just had her second baby yet keeps coming back to the ‘Den’ family.

And so they have a lot of people in their crowd to thank. But this is a crowd that gives back. It’s a rare month on the Putnam Den calendar that you don’t see several benefits for one local cause or another, from fundraisers for established charities like Jake’s Help From Heaven to a neighbor family struggling to pay some enormous hospital bill.

When I ask Tiffany and Jonathan about a vignette that describes their quintessential Putnam Den moment, neither of them gave me what I expected.

Tiffany touched on the spirit and energy she felt “…when people say thanks. Thanks for bringing in this band, or that, yes. But, more importantly, thanks for opening our home to their cause. Often, we get out of there at 5 a.m. on Saturday night/Sunday morning, and re-open for a charity event at 11 a.m. But it’s at the only way I would do this.”

For Jonathan, that moment involves “hanging out with my son (Zion, age 3. They also have Anthony, who just graduated from Saratoga H.S. and Violet, 10 months) during the afternoons. We play with the soundboard, sometimes help with a band’s load-in.”

He continued, “One time, Donna Jean Godchaux (a member of the Grateful Dead from 1972 to 1979) came in with her son’s band: Her son was named Zion too. He was maybe 45 at the time; my son was 2. They bonded big time- the eldest said it was the first time he had met another Zion.”

These examples are instructive because, much like Putnam Den itself, it is often not what you think it’s going to be.

If you’re a regular visitor, you already know that. If not, my advice is to suspend disbelief, don’t wait five more years to help them blow out the candles, and thank them for their seminal contribution to Saratoga’s cultural scene.

Putnam Den has a slew of events planned for their anniversary on Wednesday, July 2, throughout the summer and beyond. For more information on everything, visit PutnamDen.com or call (518) 584-8066.

More in this category: « Showdown At Siro’s: A One-Way Street To Court? Rock Solid: Future Eagle Scout Pushes Onward After Fire »
back to top