At The Top Of The Spinning Cycle 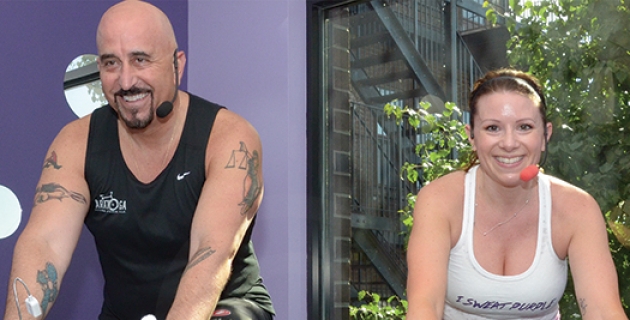 Saratoga Cycling Studio Has Many Options For A Healthier You

SARATOGA SPRINGS – Jerry and Angela Amedio have a brand-new 1-month-old they are dying to show off to you!

In addition to extra cycles, the new studio has, or is moving in equipment to deliver a variety of workout options, including:

- One hour spinning: Where an instructor guides you, but where you go at your own pace and resistance

-  TRX suspension trainer: A workout system that leverages gravity and your bodyweight to perform hundreds of exercises

- Powerhouse spin: 45 minutes on a bike combined with floor exercises

- Spin fit total body: 30 minutes on the bike and 30 minutes off the bike with exercises that incorporate weights, bands and balls

And there are other combinations and class offerings as well. See saratogacyclingstudio.com/class-descriptions for all the options.

In just their first month since opening the new facility and due to increased demand, Angela reports that she has hired four new instructors since we sat down for this interview just three days earlier! So the instructors page on the website will have to be updated, but the current roster as is includes some highly credentialed local fitness professionals including: Brie Cramer, Diane Ryan, Gail Picillo, Jennifer Giuttari, Laura Newell, Lyndsay Meilleur and MacKenzie Liptak – in addition to Jerry and Angela themselves.

Angela is about to enter some rarified company. She recently returned from Miami where she took classes and is now classified as a Spinning® Master Instructor Candidate. “I still have one more thing to complete, but I’m almost there!” She said. “Hopefully, I’ll be training the trainers by this fall.”

To give you an idea what this means, when certified, Angela will be just one of only 150 Master Instructors in the world! Not bad for someone who says on her bio that “ten years ago I found myself signed up for my first cycling class. I snuck into the back corner and was scared to death!”

By comparison, Angela estimated that there were perhaps 200,000 certified instructors worldwide – one of who is her husband (of six years) Jerry, who is also a local attorney. Interestingly, Angela is a paralegal who helps in the office, making this a family affair times two.

The modern equipment of the Saratoga Cycling Studio is complimented by their website’s online reservation and payment system. “While walk-ins are available when there is space, the best way to assure your spot in one of the more popular classes is to reserve it,” Angela advises.

The studio is running some special programs in concert with their new location. For individuals, if you buy a summer unlimited monthly program (at $69.99/month) you will get an extra week free. For businesses, the Saratoga County Chamber of Commerce has named SCS a “Healthy Saratoga Initiative Ambassador,” and there are sliding scale discounts for chamber members depending on the number of employees in a given firm. Discounts are also available for sports teams and other groups.

Also, the low-impact aspects of much of SCS’s workouts make it ideal for physical therapy and rehabilitation applications. “We are also able to verify for insurance purposes,” Angela said, so this may be covered depending on your policy.

On the horizon for SCS is the official grand opening, which we’ll be happy to announce, as well as a schedule of – wait for it – rooftop workouts on top of the beautiful Washington building!

Can you say photo op?

More in this category: « Rock Solid: Future Eagle Scout Pushes Onward After Fire Go Fourth And Party! »
back to top