A Runner’s Eye View of The Firecracker4 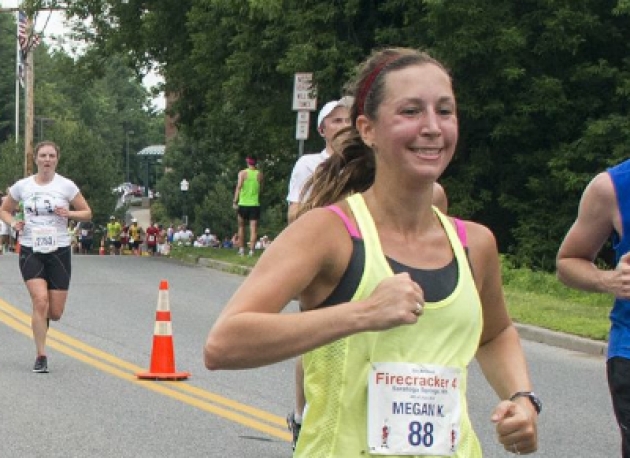 SARATOGA SPRINGS – It takes a special (some might even say crazy…) person to wake up early on a holiday morning and voluntarily slog through four miles in the mid-Summer humidity. Fortunately, I wasn’t the only person who thought this might be a good idea. As I sidled up to the start line on the morning of July 4th, several thousand other runners joined me. As a recent transplant to the Saratoga Springs area, I wasn’t quite sure what to expect when it came to the running community. I knew the high school teams were of national caliber, but I wasn’t sure if that talent translated into interest for the rest of the population.

Fortunately, as race day drew closer, it became clear that Saratoga Springs is a city for runners of all ages. I found myself pleasantly surprised and impressed with the Firecracker4 race organizers. From the streamlined bib pick-up to the dozens of vendor tents on race morning, it was obvious that this was not your usual small town race. The race featured electronic bib timing, goodie bags chock full of freebies and samples and frequent email communication. My only complaint was that the race did not have a starting mat or net chip timing. This means that your race time began when the gun went off, not when you actually crossed the starting line. Despite this minor gripe, I thought the race was otherwise executed superbly.

In February when I signed up for the Firecracker4, I barely gave it much thought. I ran competitively in college and I’m no stranger to the marathon distance, so four miles should be a piece of cake, right? I should know better. Unfortunately, a shorter race distance doesn’t guarantee a lack of nervousness or an easy effort. As the national anthem was sung and opening remarks were made, the crowd began anxiously pressing toward the start line. I looked around at my fellow competitors, many of them whippet thin and decked out in the latest running gear, and found myself second-questioning my training. Did I run enough miles? Have I done enough hill work? Did I really need that second glass of sangria last night? Despite being a runner for nearly fifteen years, that starting line nervousness never seems to ebb. Fortunately, the gun went off just a few minutes after 9 o’clock and my nerves vanished as adrenaline carried me across the starting line.

The beginning mile took us south on Broadway, familiar territory even for a new resident like myself. The terrain was flat and the crowd’s energy was contagious. Before I knew it, I was cruising past the first mile marker in 7:15. Shortly after the turn on to Caroline Street, I began noticing the spectators lining the streets. Some sprayed us with hoses (heaven on a warm July morning), some sipped mimosas (this seemed both cruel and wonderful at the same time) and others held signs and yelled encouraging words. If you ever want to feel like you’re part of a community, sign up for a local race. Perfect strangers will wake up early, hand you water, and tell you you’re awesome.  If that’s not worth the twenty-five dollar entry fee, I don’t know what is.

Alas, despite the strong crowd support, I started to feel the hurt around mile two. I wasn’t running particularly fast, but a few months of low mileage and the morning’s humidity were catching up with me. Just past mile three, we faced a steep incline. I knew the last mile included a hill, but what seemed to be a small bump in my car, felt like Mount Everest to my burning legs.

As I approached the crest of the hill, I spotted Saratoga TODAY’s photographer Francesco and did my best to look like I was having fun. From there, it was less than a half-mile and downhill to the finish. I bypassed the volunteers handing out popsicles (but, oh, how I wanted one….) and sprinted toward the finish line. My final time was 29:27, a few minutes slower than my PR (personal record), but an effort I’m content with. I wobbled through the finish area and meandered through the crowd of runners and for the first time in months, I felt like I belonged. To the city of Saratoga Springs, of course, but also to the thriving running community that calls these streets and trails home.  As I drove back to my apartment, I was already scheming and thinking about the next race or group run that I could add to my calendar.

This year marked the eight annual running of the Firecracker4, for results and information on next year’s race, visit firecracker4.com

More in this category: « Every Vote Counts Wilton Wildlife Named 50 States for Good Winner »
back to top