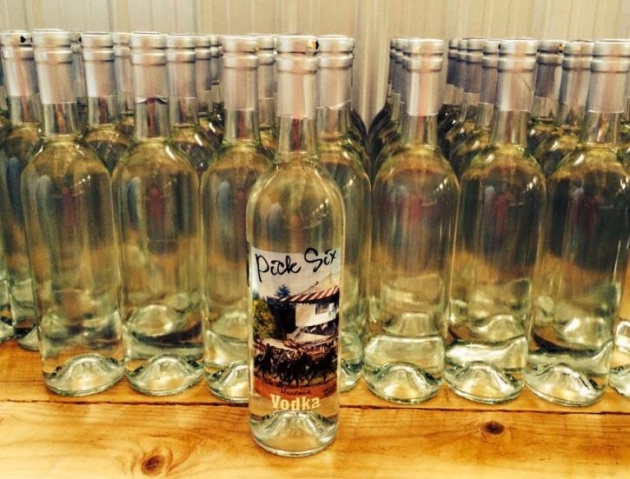 Pick Six Vodka is named after the exotic horse wager and the fact that the vodka is distilled six times.

GREENFIELD – A new distillery in Greenfield Center, nestled at the base of the Palmerton Mountain Range, is quickly making a name for itself with its popular spirit – Pick Six Vodka.

Owner and Operator of Saratoga Courage Distilling Company, Serge Shishik, is a pharmacist by trade but is also a former bar owner. He says he wanted to make an affordable, fine quality spirit using local resources and dove right into building Saratoga Courage from the ground up – literally.

Shishik built the distillery on an 11-acre lot using eco-friendly materials and equipment to minimize its environmental footprint. Even the bottles used at the distillery are eco-friendly and only use about 65 percent of the glass of a normal bottle of the same shape and size.

The distillery is quiet, even on bottling days. Instead of relying on motors and electricity, everything from the blending, filtering, bottling and labeling is done by hand.

“Bottling and capping are done manually,” said Shishik. “We rinse every bottle by hand, we fill every bottle, cap every bottle and we sleeve every bottle with a PVC sleeve and then we slide it into the heat shrinker. After that, we put the label on it and then we package it up. From start to finish, we don’t use any electricity.”

The distillery produces a 100 percent corn-grain neutral spirit that is six times distilled and GMO free; and every spirit is made using the water source directly on the land.

“You can’t make good vodka without good water,” said Shishik. “We actually dug our own well. We put a lot of attention and detail into how we dug the well and how we cased the well to get down into really good quality water. We found unbelievable water.”

This fall, Saratoga Courage will launch a new line of moonshine called Devil’s Den, named after the Palmerton Mountains. The moonshine will come in two flavors – Apple Pie and Strawberry Jam.

“I wanted to make moonshines that were a little bit like us – like New York,” said Shishik. “Our Apple Pie is a very New York-ish apple with cinnamon to make it hot and to keep us warm in the winter. For Strawberry Jam, we wanted to do something a little different than just strawberry flavored moonshine, so we did some jam flavors in there as well. My daughter actually came up with the name for it, so we’re excited about that.”

Saratoga Courage is truly a family affair. Shishik says his family has been very involved and supportive of the distillery. In fact, his brother-in-law helped create the name for the distillery and Shishik’s cousin Rich Gabriel, a well-known thoroughbred and horseracing artist in Saratoga, designed both the Pick Six label and the Saratoga Courage logo. Plus, Shishik says everyone else pitches in wherever they can.

With the tremendous amount of success in the short time Saratoga Courage has been open; Shishik wants to pay it forward.

Every day during this summer's racing season, Saratoga Courage sponsors a promotional pick six wager and all winnings will be donated to The Giving Circle -- a non-profit organization based in Saratoga Springs. While the exotic wager is a hard one to hit, the distillery along with its distributor, DeCrescente Distributing Company, have guaranteed a $200 donation to The Giving Circle regardless.

More in this category: « My Take On Mayhem Saratoga County’s Next Big Boom »
back to top