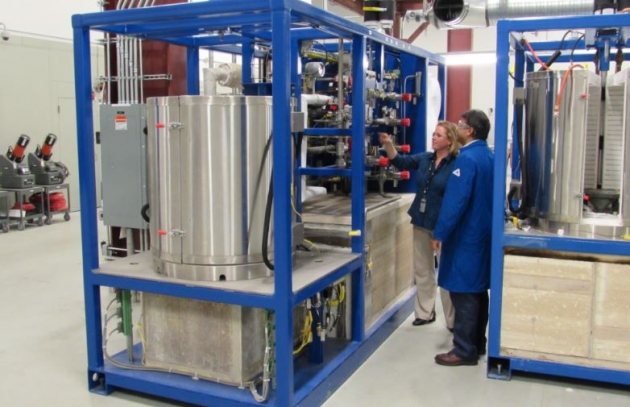 Solid oxide fuel cell technology is a game changing energy technology, according to GE, that will deliver more power output at a lower cost with low emissions.

GE’s Hybrid Solid Oxide Fuel Cell system combines a state-of-the-art fuel cell with industry leading gas engine technology to reach greater than 65 percent energy efficiency. The combination of fuel cells with a gas engine ensures consistent full power generation with higher energy efficiency than any current technology on the market. The system can also be operated as a combined heat and power plant with a conversion efficiency exceeding 95 percent.

GE’s Solid Oxide Fuel Cell emissions are lower than any conventional power generation plant and can generate 1-10MW of power; and unlike other systems, the new fuel cell is using stainless steel in place of platinum and rare metals.

“The cost challenges associated with the technology have stumped a lot of people for a long time,” said Wellington, advanced technology leader at GE Global Research and the head of GE’s fuel cell business. “But we made it work, and we made it work economically. It’s a game-changer.”

Wellington says that the fuel cell, which received financial backing from GE’s ecomagination program, can generate electricity at any location with a supply of natural gas. It can get going quickly, does not need new transmission lines and produces lower emissions than conventional power plants.

GE, the largest industrial company in the U.S., credits the advanced manufacturing coating breakthrough and system integration in the labs at GE’s Global Research Center in Niskayuna as the inspiration behind GE Fuel Cells.

How it works is fuel is pumped through a solid oxide fuel cell, generating the bulk of the electricity. The exhaust gases of the fuel cell are sent to the gas engine, maximizing the energy extraction from the fuel. Emissions are low and environmentally friendly, mostly consisting of water and carbon-dioxide.

Manufacturing equipment, fuel cell test stations and gas storage tanks, among other things, are already being brought to GE’s new plant in Malta.