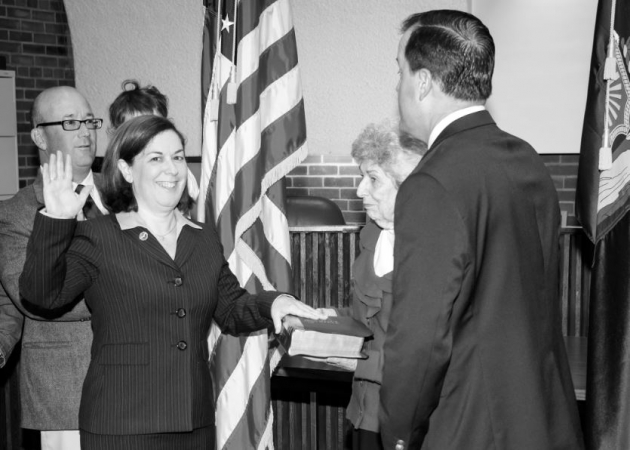 Karen Heggen takes her oath as acting district attorney of Saratoga County while her mother, Marilyn, holds the Bible. Alongside her are her brother, Mark, and her nephew, Dan. Photo by Francesco D'Amico

BALLSTON SPA – Saratoga County has its first female District Attorney in Karen Heggen after she was sworn in Friday, Sept. 19.

“To have worked for so long in the office and to have had some role in putting together the amazing team…it’s exciting and its humbling to take the reins and lead everybody forward,” said Heggen.

Heggen, a 51-year-old Malta native, will spend the next three months serving as acting D.A. and is running unopposed for election in November. She has spent the last 22 years as an assistant district attorney in the Saratoga County D.A.’s office.

Heggen’s father, Arne E. Heggen, was a local attorney and served for many years as the Saratoga County Attorney and was active in the bar association.

“I grew up watching my dad do many different things as a lawyer and I thought it was a great profession,” said Heggen. “I sort of followed him in his footsteps and I got a chance to practice with him when I finished law school.”

Heggen graduated from Ballston Spa High School, Middlebury College, and Vermont Law School. She’s been a lifelong resident of Saratoga County and says as the acting district attorney, she wants to maintain the values of the community.

“What I’m looking to do is to continue the strong traditions that we’ve had going on here,” said Heggen. “We’re an office, I believe, that every day seeks justice and that’s a balance of many different things. Ultimately what we want to do is keep our community safe and a place where people want to continue to live.”

To accomplish that, Heggen says the office needs to be involved not just in the prosecution of cases, but also preventative programs, educational programs, non-profit organizations, advocacy groups, and programs with alternative proceedings such as drug treatment court.

Outside of the office and the courtroom, Heggen has been and is involved in a number of community organizations such as Saratoga Bridges, the Charlton School for Girls, The Ballston Spa Educational Foundation, Saratoga County Youth Court, and Cornell Cooperative Extension of Saratoga County. She has also been active at St. Mary’s Catholic Church in Ballston Spa.

“I actually live in the same neighborhood I grew up in,” said Heggen. “I like where I live, I like being a part of that community. It’s been an amazing experience these last few weeks with the range of people that I’ve heard from with well wishes on my new position. Whether they were teachers, people who knew my parents, friends of mine from school as well as my siblings, it’s a great place to live and a great place to be. I’m excited to be the person who’s going to bring this office forward and continue to do the good works we’ve been doing.”

More in this category: « Forno Bistro Petitioning for a Visit by Zac Brown Band Bravo Limoncello! »
back to top