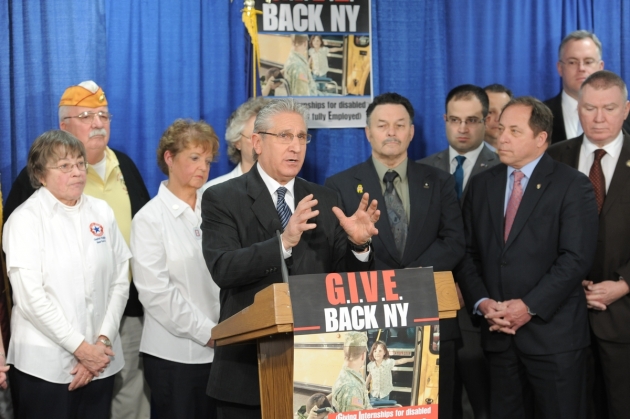 ALBANY – The 2015 legislative internship program may include some unconventional interns this legislative session. The New York State Assembly is implementing an initiative brought by Assemblyman Jim Tedisco (R,C,I-Glenville) to recruit veterans and members of the military who are enrolled in college.

In February, Tedisco called on the Assembly to set aside a minimum of 10 percent of the current internship program positions for veterans, specifically service-disabled veterans. This first-in-the-nation pilot initiative is called G.I.V.E. Back NY – Giving Internships to Veterans not fully Employed.

Every member of the Assembly Republican Conference signed a letter to Speaker Sheldon Silver and Assembly Intern Chair Deborah Glick, calling for implementation of G.I.V.E. Back NY. Since then, the Assembly has reached out to military affairs offices at college campuses across New York to recruit military and veteran students to become Assembly interns for the 2015 session and is now reviewing applications. The Assembly will pay these interns a stipend of $4,900.

“We truly owe our veterans everything we hold dear as Americans: all of our freedoms, liberties and relative safety that we enjoy are thanks to the service of our veterans. Who better than our veterans and our wounded warriors to see the inner workings of the republic and representative democracy they put their lives on the line for, to the extent that some must now have to deal with a life-long disability,” wrote Tedisco in a news release. “As our veterans learn about state government, my colleagues and I and our other college interns will learn from them about honor, duty, courage, and perseverance against the enemies of freedom and about the principles that make America great. This will also give our veterans significant experience to put on their resumes for future long-term employment.”

Tedisco and state Senator Bill Larkin (R,C-Cornwall on Hudson) are sponsoring legislation to set aside a minimum of 10 percent of internship slots for disabled veterans and 10 percent for other veterans and include a stipend of $11,500 – the highest current pay level for interns.

“While I applaud the implementation of this program, the Assembly should raise the bar even higher by paying veterans at the highest possible level and setting aside a minimum of 10 percent of internship slots for veterans and another 10 percent for disabled veterans, who are not necessarily matriculated in a college program but are just as deserving of an opportunity to see first-hand how their state government works,” wrote Tedisco.

There were 120 interns in the Assembly internship program during the 2014 legislative session, which is down from 180 interns in 2013. Currently, the program is open to students matriculated in a four-year college. Undergraduates receive a $4,500 annual stipend ($6,500 for SUNY students) and graduate students earn $11,500. It is budgeted at $929,149 this fiscal year. There will be no additional cost to taxpayers to implement G.I.V.E. Back NY.

"As our disabled veterans learn about state government, my colleagues and I and our college interns will learn from them about honor, duty, courage, and perseverance against the enemies of freedom and the principles that make America great. This pilot initiative also will give our disabled veterans significant experience to put on their resumes for future long-term employment," wrote Tedisco.

More in this category: « A Holiday Purchase with a Purpose Book Angel »
back to top