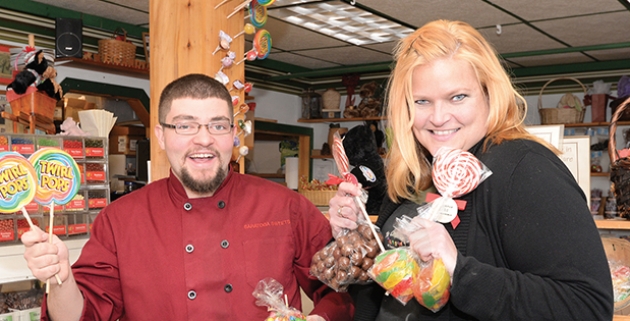 That’s because the owner and co-founder of Halfmoon-based Saratoga Sweets, Mike Fitzgerald, recently decided to step back from day-to-day operations after 26 years. The creator of the iconic, beloved “Peppermint Pig” is turning over the reins to son Mike, Jr.

The two company’s operations will merge, with an expanded area inside the nearby Rip Van Dam Hotel at 353 Broadway, where Fitzgerald, Jr. will head up a new candy kitchen that will be housed in this space. Meanwhile, Oesch will continue operations at 5 Washington Street with a refreshed look to accompany an expanded product line. Commenting on the forthcoming expansion and working with Saratoga Sweets, Oesch stated:

“This is a great addition to my store and I am so excited.  My landlord, Bruce Levinsky (owner of both 5 Washington and the Rip Van Dam) has created a larger space for us to make more delectable creations and to carry on Saratoga Sweets traditions. As time moves on we will see what space may be needed to expand and we will grow from there.”

The Rip Van Dam is also currently the home of an expanded Maestro’s at the Van Dam restaurant, which Oesch noted has a pastry kitchen. This could further help expand the new company’s product line further as the occasion arises.

A target launch date for the newly merged operation has been ambitiously pegged at Jan. 25 “just in time for the busy Valentine season,” Oesch noted. “We are hoping (by that date) to have everything meshed together including a wholesale division, new website and overhaul of both the retail and kitchen spaces.”

For more information, contact Dawn Oesch at This email address is being protected from spambots. You need JavaScript enabled to view it. or (518) 580-0499.

More in this category: « Senior Living Partnership Plowing Through Winter »
back to top