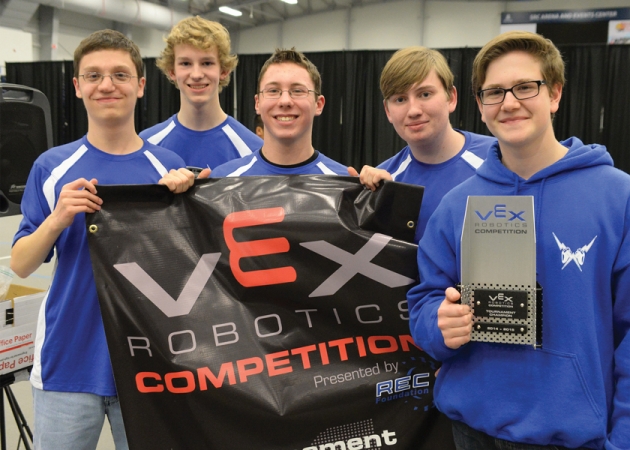 Robotics Team to Compete in Kentucky

SARATOGA SPRINGS – Only in its second year, the Blue Streak Robotics Team at Saratoga Springs High School is already making a name for itself. The team recently qualified for the VEX Robotics World Championship and will head to Louisville, Kentucky this spring to compete with and against the best of the best.

The road to qualifying for the World Championship, let alone being considered as one of the top robotics teams on a global scale, was one filled with laborious evenings designing and building robots for entry into multi-state competitions throughout the school year.

The teams built robots to perform critical tasks in competitions – the more tasks the robot completes in the allotted time, the more points each team can earn, and the highest scoring team is the winner.

From conceptualization and design, to prototyping, full-scale assembly and programming, these students weren’t just exposed to robotics and STEM-related work – they lived it.

The Blue Streaks Robotics Team is comprised of three teams in itself – two teams of ninth graders and one team of sophomores and juniors. All three teams competed in the Northern NY VEX Toss Up State Championship at Onondaga Community College Sunday, Jan. 25 and all three finished in the top 10 after 78 rounds of qualification matches. In the end, it was Saratoga’s team consisting of Mitchell Gerhardt, Paul Harrington, Derek Raushi, Lucas Beitzell, Elizabeth Palmer and Stephen Furstoss who came out on top.

“There were 39 teams there from all across the Northern New York region,” said Preston Sweeney, club advisor and technology teacher at Maple Avenue Middle School. “The championship round was Saratoga versus Saratoga, so that was exciting…having our team compete against each other at the same time. The team of upperclassmen pulled out a victory and now they’re headed to worlds.”

While only one of Saratoga’s teams will compete at the world championship, it’s all hands on deck in preparation for the event taking place April 15-18 at the Kentucky Exposition Center. The team, comprised of six students, will go up against the top teams from over 400 VEX Robotics tournaments happening in cities around the world from June 2014 through March 2015.

Sweeney says he would like to take the other two teams to the world championship as well, to support the qualifying team and to network with other high school students who share their interest and passion for robotics.

“The team that qualified is going to Louisville, but my plan is to bring all of the kids because it’s such a great experience,” said Sweeney. “They’re going to see robots down there that do incredible things and just to be a part of that global community, it’s important.”

But making the trek to Louisville, Kentucky isn’t cheap. Sweeney estimates the trip will cost around $15,000 total. The Blue Streaks are also trying to work with Granville High School and Rome Free Academy, both also qualified for the world championship, to possibly organize travel on a charter bus.

“We have a little bit of money in our team account for the registration, which is $850,” said Sweeney. “A charter bus will be about $10,000 and the hotel will be about $5,000. It’s a big chunk of money. Clubs aren’t really funded through the district, so we’re kind of on our own and we’re trying to make it happen.”

The team is exploring business sponsorships and other fundraising opportunities. They’ve even set up a “Go Fund Me” page to help raise the remaining $13,000. So far, they’ve received a little more than $1,500 through their page. To make a donation, visit gofundme.com/mc0do8.

“This season has definitely exceeded my expectations,” said Sweeney. “I remember having a conversation with them three months ago where we didn’t think we would make it to state. Now, we won the state tournament and we’re headed to worlds…it’s just incredible what they’ve accomplished. They’re a phenomenal, dedicated group of kids.”

The team is taking a well-deserved break and will reconvene in March to make preparations to their robot before it hits the world stage.

More in this category: « Snow Angels Code Blue Needs Help »
back to top