The Real People Behind Homelessness 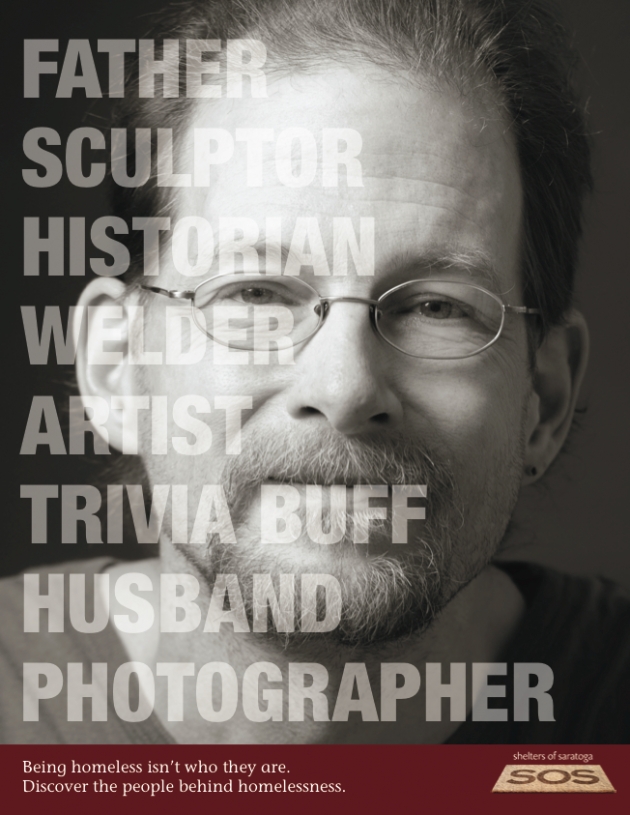 Shelters of Saratoga Gala’s Exhibit Shows the Humanity of Struggle, Hope and Success

SARATOGA SPRINGS – For it’s fifth annual gala, Shelters of Saratoga (SOS) will be adding an extra, dramatic dimension – a showcase of the individuals impacted by homelessness through a series of intimate portraits and their stories that go beyond the stereotypes – and are the most powerful reasons why you should consider attending.

The gala is next Thursday, Mar. 19 from 6-9 p.m. at Longfellows Restaurant. Admission is $100; visit sheltersofsaratoga.com/events/shelters-of-saratoga-gala-2015 for more information and reservations. At the event there will be a series of 60 live and silent auction items available, a cocktail reception and live music by Jeff Brisbin.

But it is the people themselves – people whose lives have been positively impacted by the work of the shelter, and their stories, that will be front and center for gala attendees. Included are a series of powerful images from the lens of Mark McCarty showing SOS clients and houseguests in a way that cuts through the stereotypes and allow you to view the full spectrum of humanity of the people who have been helped by SOS.

And stories. “I became homeless when I lost my home due to foreclosure,” says Stanley Peters, SOS houseguest. “Living in a motel used what little money I had and there was no one that I could stay with locally. A friend suggested that I call SOS.”

“People who are homeless are stereotyped as panhandlers bumming spare change or pushing around a shopping cart filled with everything they own,” says Peters. “That’s not who I am. I’m married, have children and two jobs. I like art, reading, sculpting and metalwork. When I leave SOS, I hope to have a place to bring my children to visit me that I can proudly say is mine.”

In 2014, SOS helped over 400 men and women through their sheltering program and had over 1,500 face-to-face contacts through their Mobile Outreach unit with youth, adults and families.

“I almost didn’t go to SOS because of the way that homeless shelters are portrayed. However, I have found this to be an atmosphere that’s more like a family. We help one another get back on track. I’ve had nothing but good fortune since coming here.”

Hall has been sober since July 2008 and noted that his other accomplishments include finding and maintaining work and accepting staff’s help to find the resources that have gotten him back on his feet. Hall currently works two jobs and has recently moved into one of SOS’ affordable housing apartments.

When asked to what he attributes his success, Hall stated, “You can’t stay in the past, you have to keep looking forward.”

The Honorary Committee Chair for the Gala is Laura Chodos. Title sponsors for the event include Vince, Patty, Ron and Michele Riggi and Saratoga Casino and Raceway. Saratoga TODAY Publisher Chad Beatty will oversee the live auction, with items available such as Saratoga Race Course Track Box seats, VIP tickets to Electric City Couture Fashion Show and after-party, tickets to Les Miserables on Broadway and many other items.

“I am very pleased to celebrate the good work of Shelters of Saratoga and the support we provide to those who are homeless or at-risk of homelessness in our community,” says Michael Finocchi, SOS executive director.

More in this category: « The Foal Project” at Fortunes Restaurant Making the Case »
back to top