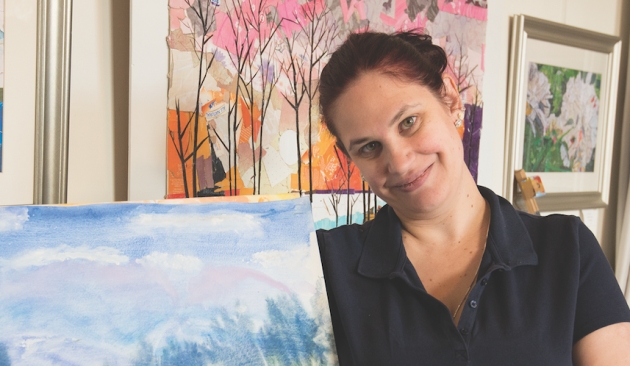 Saratoga Bridges Client is a Story of Triumph

SARATOGA SPRINGS – Meet Amanda Baillargeon. She’s got a lot of things going for herself: A sunny disposition, stunning artistic talent and a future that is brighter not just because of the assistance she was able to receive, but also because of her own drive. Amanda is an example that shows that people with learning disabilities can do more than just survive – they can thrive and achieve great things.

As March is Developmental Disabilities Awareness Month it’s a perfect time to tell her story. A success story that exhibits how important local, not-for-profit social service organizations like Saratoga Bridges are to their client’s lives – enabling them to maximize their potential. How, in a proper nurturing environment, great things are possible. But that’s only half the story.

The other half is the spirit of people like Amanda Baillargeon. You talk to her and you can’t help but be touched and inspired.

She is an extremely talented artist, who has maximized her talents since coming to Saratoga Bridges’ Creative Endeavors facility in Ballston Spa in 2004. Amanda’s mentor was Barbara Grey. “I love it! I’m in my own world!” Amanda says with a smile, and given the chance to develop that world, Amanda has received great acclaim.

Amanda said she gets her primary inspiration from photographs and Beatrix Potter prints. Her pieces have been featured in innumerable shows and exhibits. In particular, she has been recognized as a standout at the prestigious The Arc Otsego’s Voice! Annual juried art exhibition opening, which contains works by artists with developmental disabilities from across New York State.  Amanda’s watercolor painting ‘Love Birds’ was featured in Voice!5.  Her piece “Reflections” was selected for the cover for Voice! 6. She had a piece included in Voice!7.  At the Voice!9 Art Show, Amanda won 1st place for her painting “The Wait” and received a $300 prize. The painting sold during the opening reception for $125. Additionally, at the Creative Endeavors “Through My Eyes” juried art show, her piece “Garden of Wild Flowers” won 3rd Place and received $100.

“I’ve been her instructor for seven years, and Amanda has come incredibly far,” said Darlene Petralia, an instructor at Creative Endeavors. “Not just in her technical artwork abilities, but in how it has made a huge difference in her ability to relate and socialize with others. She has just really blossomed. I can see her developing a great following.”

Art is a cornerstone of Amanda’s life, but her success is evident in other areas of life as well. She is particularly fond of swimming, receiving two silver and one bronze medal at the Special Olympics. You can find her at the Skidmore pool each week, and participating as a Walking Buddy at Saratoga Bridges, which pairs up an individual with a staff member. Amanda’s partner is Executive Director, Valerie Muratori.

“Amanda and I have enjoyed being Walking Buddies. We motivate each other with the goal of staying fit even throughout the cold winter.” Muratori said. Amanda stated that they walk three times around the building each possible day, and with great pride noted that she has lost 30 pounds through her commitment to health and wellness. She is now a member of Saratoga Bridges’ wellness committee.

The programs at Saratoga Bridges have also given Amanda the skill set to work in various capacities. She assists Bridges’ Communications Specialist Pamela Polacsek.

“Amanda truly makes my job rewarding. “It’s a sincere privilege to provide an opportunity for Amanda to fulfill her life’s aspirations, interests and dreams. It is especially rewarding to see her accomplishing some of these goals.” Polacsek said.

Also, last July Amanda began working at TJMaxx. Since being trained and learning the requirements of the job, she works with a team as a backroom clerk to process new merchandise. “Saratoga Bridges is proud of our relationships with businesses throughout Saratoga County.  We work very hard to understand each of our business partner’s expectations so the best possible employee is placed in that best position. TJ Maxx is an prime example of a longstanding, strong supporter of hiring people with disabilities and for that we are most grateful.” Polacsek comments. “Also, Amanda has been a hostess at our two of our largest fundraisers - The White Party Gala and Travers Day at the Races.”

It doesn’t end there. Amanda is a 2011 graduate of “Bridges to Skidmore,” a modified college experience, and was a student mentor in 2013-14. Participants from Saratoga Bridges are brought to the Skidmore campus on a weekly basis and are paired with a Skidmore student for the duration of the semester. At the end of each semester, a celebratory luncheon is held. Saratoga Bridges participants invite staff and family. They graduate from the program after four continuous semesters of participation. Amanda credits her parents for their support in all these areas, “They’re my best friends!” She said.

Amanda is now living in a community-based home with five women in Saratoga Springs, where she enjoys activities like cooking, going to the library, movies and shopping. But though she has come far, Amanda is not without several goals for the future.

With five women and three bathrooms in her apartment, it’s no surprise that she has a goal of getting her own apartment. Saratoga Bridges has access to six “supportive apartments” which would afford her more autonomy. Also, her big dream is “to start an art camp for kids with developmental disabilities.” She said.

Once you get to know Amanda, you learn that you wouldn’t want to bet against her accomplishing anything she has her mind set to. And that’s why the work Saratoga Bridges does is so important.

More in this category: « Record Donations, Record Need On SNGC and the City Center Parking Garage »
back to top