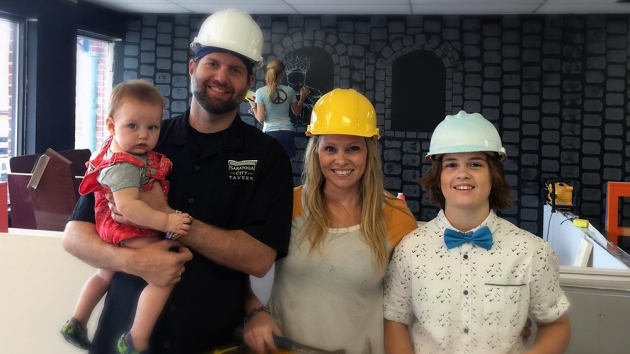 SARATOGA SPRINGS – Sara Cummings, a mother of two, recently went out to a popular chain restaurant and noticed that the kids there weren’t having a good time. They were fidgeting in their booths and had energy that couldn’t be contained in a regular restaurant setting. But Cummings had a plan. Her and her husband, Patrick Finch, have designed a place where parents and children can both be happy. The Saratoga’s Kids Castle, a restaurant paradise for kids, is opening its doors on August 13 to provide Saratoga with a much needed family space.

“We thought ‘I think we’re onto something here,’” said Cummings. “The community has given us a positive response and we’re really excited about it.”

Saratoga’s Kids Castle features giant structures for children to play on, such as castles and pirate ships. There are play and craft tables and dress up stations where kids can put their imaginations to work.

For children under the age of three, there is a baby and toddler play area called “Crinkle Manor,” where there are age-appropriate toys for little ones to build their cognitive development while also having fun. It is also safe for small children since they cannot enter or leave “Crinkle Manor” by themselves.

“There is no TV and no electronics, just real play and real interaction,” said Cummings.

The menu is yet another kid-friendly aspect of Saratoga’s Kids Castle. The menu was created by registered dietitian in nutrition, Nichole Doolingm of Whole Nichole Nutrition. The food is all nutritious, healthy and authentic. There are even special sections of the menu with food designed based on the age of the child. The menu is mindful of food allergies and intolerances with special menu items for both parents and children. There is also a full café menu which includes lattes, coffees, loose teas, smoothies and juices.

Sara Cummings and Patrick Finch both have a history in real-estate and operating a restaurant. In 2006, Finch purchased and operated the Saratoga City Tavern and in 2014 he renovated and opened Kings Tavern. With this experience under their belts, they are ready to take on this adventure together.

“I’m looking forward the most to the birthday parties,” Cummings explained. “A lot of the employees are in the local drama club so they’re very interactive and creative with the kids.”

There are eight detailed party packages to choose from including the Princess Spa Party, the Dragon Party and the King or Queen Party.

Adding to the festive and lively atmosphere of the restaurant/play land are large murals painted by Gretchen Tisch from Saratoga’s Paint and Sip. Interestingly, the king and queen mural overlooking the baby area is based on the likeness of Sara Cumming’s parents while the pirate room has a mural of crazy pirates based on Patrick Finch’s parents. In the kitchen area, there is a lacrosse princess mural that represents Cumming’s 13 year old daughter, Katie.

Visitors will finally get to see Saratoga’s Kids Castle on August 13, opening at 9 a.m. with a ribbon cutting tentatively scheduled for 11 a.m.  Hours will be Monday through Friday from 9 a.m. to 7 p.m. On the weekend, it is open from 5 to 7 p.m. with a special focus on birthday parties during the day. Admission is $10 for all-day play per child. From 4:30 to 7 p.m., admission is free. There are also monthly passes available.

More in this category: « PEB! Soul, Jazz and a Century of Daggs: Saratoga Soul Centennial Celebrates City and Local Lineage »
back to top