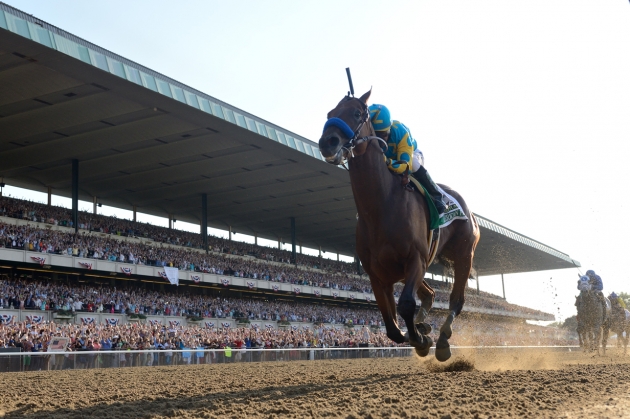 American Pharoah at Belmont winning the last leg of the Triple Crown. Photo by NYRA.com

SARATOGA SPRINGS — Everyone in Saratoga, from locals and other upstate New Yorkers to international race fans who are in town for the entire race meet, have held their collective breath since 7:05 p.m. on Saturday, June 6.  The instant that American Pharoah crossed the finish line, far-and-away the Belmont Stakes victor and thereby the first Triple Crown winner in 37 years, shouts of, “He won!” rang out, up the Hudson River, through the hills and valleys between Elmont, New York and Saratoga Springs. With the next exhale came the question, “Will he run in the Travers?”

It is unthinkable that three-year-old Thoroughbreds who’ve earned the right to be in the Travers would blow off the opportunity to be in it. The Travers is the “Mid-Summer Derby,” but it is also the very history of American horse racing, itself. Saratoga is, well, Saratoga. And the Travers is, well, the Travers.

There was quite a bit of nervous doubt that American Pharoah’s connections would bring him here, at all.  When the Haskell was chosen as his next start after his historic Belmont Stakes, those who know racing knew that, of course, there would be plenty of time for the bionic colt to recover from that race. The Haskell is 1 1/8 mile; the Travers, 1 1/4.  But with 27 days between the two races, that extra 1/8 of a mile should not have been a consideration for owner, Ahmed Zayat and trainer, Bob Baffert. Twenty-seven days to rejuvenate, and only 1/8 of a mile more to run on August 29?  Practically a vacation for the reigning King of American Horse Racing.

And there is precedent for a Triple Crown winner to travel north for the Travers:  in 1941, Whirlaway won the Triple Crown, then sealed his glory in our Mid-Summer Derby. With that frosting on the cake, Whirlaway’s dominance was confirmed.

To dismiss Saratoga’s rightful reputation as the crown jewel of horse racing – the place at which the world’s highest-level of Thoroughbred racing takes place – would have been a poor decision on the part of the horse’s cautious trainer. Baffert’s won the Travers only once before – in 2001, with Point Given. (Point Given had won the Preakness and Belmont, but with his Travers victory, Point Given created his own Triple Crown. He went on to become U.S. Champion Three-Year-Old Colt for 2001, and 2001’s Horse of the Year at the Eclipse Awards. Yes, the Travers carries that much weight.)

They could have said, “No,” but—glory, hallelujah—they said “Yes.” Prayers were answered on Sunday, August 23rd,  when Owner Ahmed Zayat joyously announced that, indeed, American Pharoah and his entourage will descend on our fair City in the Country, for the day of racing that is destined to become the Event of the 21st Century.  When the best horse in North America sets his hooves on the spring-enriched soil of this singularly-marvelous city, history will be made. Saratoga long has been The Best, and The Brightest:  a shining light in the American urban landscape.  Now our glimmering city-on-a-hill will host a Thoroughbred whose entry into the Pantheon of historic, great horses already is sealed. Race fans from around the continent—indeed, from around the world—will descend on our fair city, hoping just to see the mighty warrior, to catch a glimpse of genuine glory.  For race fans, here’s a couple of things of note: Be sure to catch a glimpse of his uber-short tail (it’s so cute, probably chomped off by a paddock-mate when he was a baby).  Take note of the earplugs in the big boy’s generously-sized ears.  (The roar of the crowd is disconcerting.)  And whatever you do, when you text your friends or post on Facebook—misspell the word, “pharaoh.”  Part of the charm of the history-maker is the typo that gave him the official moniker, American Pharoah.

Racing here, in the Travers, will add not only to the ever-growing cache of Saratoga, but also put that extra jewel into the great Pharoah’s well-earned crown.  This is a royal match, of the first order. Hail, American Pharoah, and welcome to you, your happy owners and Bob Baffert, to Saratoga Springs and Saratoga Race Course!

Read 5651 times
More in this category: « City Prepares for 100k Public Invited to 9/11 Ceremony and Remembrance »
back to top