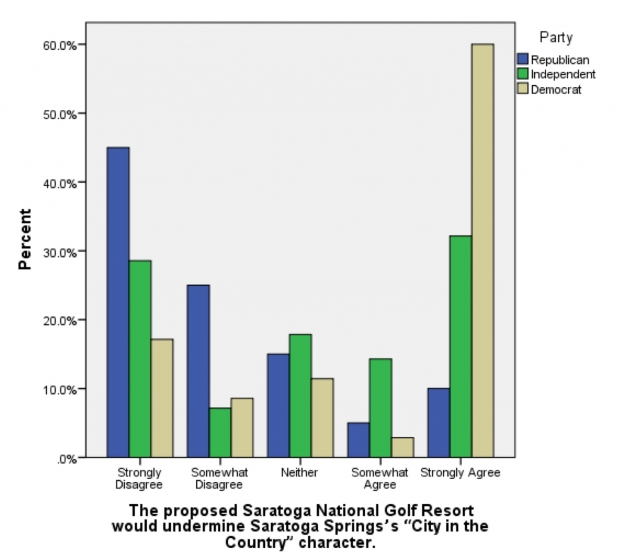 SARATOGA SPRINGS – While many wonder what will be the fate of the proposed expansion of Saratoga National into a golf resort, one group is using the debate as a learning experience. Skidmore College Professor Robert Turner took his Real Democracy class to a recent Saratoga Springs City Council public hearing regarding an aspect of the expansion to survey the attendees and learn their views on the proposal.

The point of Turner’s lesson was, as he put it, “to show the students how public meetings are dominated by purists who feel strongly about the issues rather than moderates or centrists.”

To confirm the theory, Professor Turner came up with a series of questions, to which he received responses from 90 attendees. While some questions were to find out demographic data about attendees, others were to determine how involved they were in City Council matters.

The findings pointed to a deep division of opinion among attendees – with respondents’ views typically corresponding to their political orientation. Whereas Turner found that approximately 60 percent of attendees who identified as members of the Democratic Party strongly agreed the expansion would undermine the 'City in the Country' character, less than 15 percent of Republican respondents held such a view. Conversely, while a majority of Republican respondents strongly agreed the proposal offered a balanced approach, a near equal percentage of Democrats strongly disagreed.

Turner’s findings, as he himself noted, must be taken with a grain of salt. He cautioned that the survey results were representative of those in the room and not necessarily those in the City of Saratoga at large. That is because, as his survey confirmed, the vast majority of attendees were those with the strongest views on issues.

The survey also suggests that those attending the meetings have strong stakes in the fate of the community. The average respondent had spent 24.9 years living in Saratoga.

“As a liberal, what I'm learning in the class is challenging my worldview a bit...it's not just business versus everyone else,” said Luca Mobilia, a junior at Skidmore College who helped administer the survey. Mobilia also noted that he hoped to apply what he learned in the class should he himself enter politics.

Zach Lachman, a senior at Skidmore College, said he hoped he "would be able to use that knowledge for myself when I find a place to settle down. I think knowing how one's local democracy functions is very useful for anyone who is looking to settle down and stay somewhere for a while."

When asked if he had any advice for anyone who felt strongly one way or the other on an issue of local government, such as the proposed expansion of Saratoga National, Lachman offered simply, “Go to a city council meeting and be sure to register and vote.”

More in this category: « Rotary Brunch Fundraiser Honors Community Leaders Off To Austria! »
back to top