SARATOGA SPRINGS – Wild animals observed in their natural habitat can be a fascinating sight. A deer spotted on a morning walk, squirrels seen playing in the trees, and birds soaring the skies above are looked at with wonder and curiosity. But what happens when wild species begin encroaching into where people live, in particular, species that can pose a dangerous threat? In the last month alone, there have been two bear sightings in Saratoga Springs, locals are distraught over losing livestock to coyotes and, though there is no proof for certain that coyotes are the culprits, there is a noticeable increase in the number of cats going missing in the Clifton Park area.

Without a doubt, people often consider bears and coyotes two nuisance species worth avoiding at all costs.

Unfortunately, there are certain species in general that are thriving living among humans. “Those are raccoons, skunks, coyotes, deer and geese. Those five are the big ones. But bears and coyotes are the scary ones, because there is a predatory component to them; they have big teeth, and because they do kill pets and bite people,” said Allen Gosser, the State Director for Wildlife Services at the United States Department of Agriculture.

Now, while coyotes and bears may be dangerous, Gosser points out that they are not lurking behind every tree. In fact, most coyote nuisance calls come from down state, in Westchester County, and bear disturbances are more common in the Catskills. However, residents upstate still need to be prepared as there is still a possibility of a coyote or bear encounter.

But why are these species coming into residential, urban environments in the first place?

“There is really good cover in residential areas. A lot of wild animals, like coyotes, are very secretive,” said Gosser. “They’re living among us, except we just don’t know it, usually because they are nocturnal.”

Good hiding places are not the only thing drawing in wild animals; they are also attracted by human food. Garbage cans and pet food left out are easily smelled and picked up.

“Coyotes are omnivore and bears are the same way. There is a wide range of what they do eat. Coyotes in particular will exploit any food they can,” said Gosser. “Some people that see coyotes will start feeding them, and that’s the worst thing you could do. You’re going to get them habituated. You’re not only inviting an unnatural situation, but these animals are also known rabies carriers.”

One of the most dangerous threats wild animals pose in close proximity to humans is the possibility of spreading the rabies virus. Though attacks are rare, frightened or aggressive animals can bite pets, children, and adults alike, which always carries with it the risk of rabies infection.  Rabies can only be detected post-mortem by examining the brain, which means that the bite victim will most likely have to undergo post-exposure therapy as a preventative measure.

“If anyone gets bitten by any sort of wild animal, they should immediately see a health professional,” said Gosser. Wildlife Services at USDA seeks to prevent rabies by trapping and vaccinating wild animals, preventing further exposure.

Homeowners have several options when it comes to protecting their home from coyotes, bears and other wild nuisance species. If animal activity is suspected on your property, it is best to remove all attractants to the animals (see “Prevention Tips”). They can also call a local, licensed trapper or a Nuisance Wildlife Control Operator (NWCO) to come and remove the animal from the property. These professionals are trained in how to best deal with and handle potentially threatening animals. 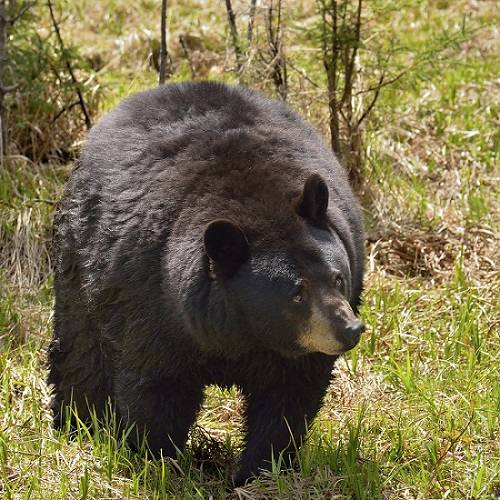 But what do you do if you find yourself face to face with a wild animal expectantly?

“Stand your ground and be big. Some people even say flap your arms. Personally, I think it’s important to remain calm,” advises Gosser.

If the nuisance animal is also a game animal (goes into season for hunting), licensed hunters are allowed to take them if they are in season. Always check the local hunting regulations and guidelines first to determine which animals can be hunted and when. Self-defense is also taken into consideration if the animal poses a direct threat of harm to you or your family.

Knowing when certain wild animals will be most abundant and prominent is another important part in avoiding them. Be on the lookout for bears in late winter and early spring, as well as harvest times when crops are in the field. Coyotes are often spotted in mid to late summer.

For more information about nuisance species, including coyotes and bears, visit the New York Department of Environmental Conservation’s website at dec.ny.gov or the USDA’s Animal and Plant Health Inspection Service’s website at aphis.usda.gov.

Prevention Tips to Keep Nuisance Animals off your Property:

-Make sure that garbage bags are securely tied and that trash can lids are placed on firmly. Locking trash bins are also available that are made specifically to keep out wildlife.

-Do not leave food out. When possible, feed domestic animals indoors so their food does not attract predators.

-Do not operate refrigerators or freezers outside or on porches.

-Limit or eliminate bird seed, which is known to attract bears and coyotes.

-Do not let domestic pets run free without supervision.

-Block off and seal crawl spaces where animals could find their way in.

-Fencing the yard may be a solution for keeping out wildlife, preferably one that is set at least 6 inches into the ground and four feet high or taller.

More in this category: « Battle of Saratoga To Be Featured On Quarter Skidmore Remembers Michael Hedges »
back to top