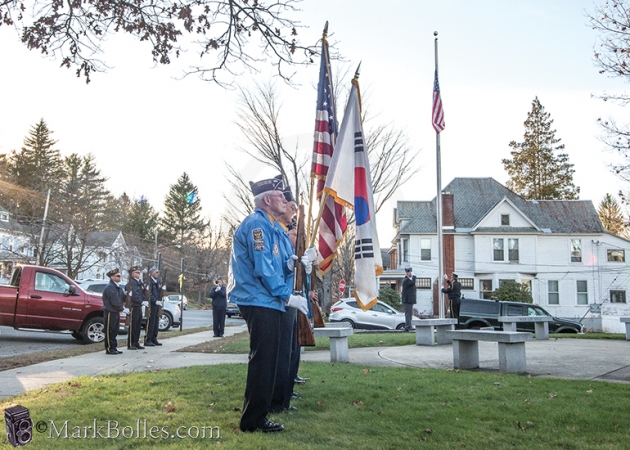 An Honor Guard in front of the Saratoga County office complex raises a Flag, which had flown over the US Capitol, to honor Eugene Corsale.

BALLSTON SPA – The Saratoga County Board of Supervisors honored Eugene J. Corsale at a monthly ceremony that was attended by family, friends and colleagues on Tuesday, November 17.

They came together to honor a man who was the epitome of the word honor. A man who had done so much his lifetime in service to others. Indeed, this monthly ceremony to honor a deceased veteran had been founded and chaired by the man they were honoring on this day.

Gene Corsale was not only heralded as a tireless advocate for Veteran’s affairs, but the many dignitaries who spoke in tribute to him also noted his leadership in fostering a revival on the West Side of Saratoga Springs, as well as his love of trains.

Gene Corsale entered the US Navy in 1950 and served on the Battleship USS Wisconsin in Korea. His career in the Navy took him to 22 different countries, and, among the many honors issued during his service were the National Defense Medal, Good Conduct Medal, United Nations Service Medal and Korean Service Medal.

The Corsale family was presented proclamations on behalf of the City of Saratoga Springs, Saratoga County and the New York State Assembly. Senator Hugh Farley’s office bestowed a unique honor – a second New York State Senate Liberty Medal – to the family. They were also presented a US flag, which had been flown over the Capitol Building, and, following the ceremony, attendees witnessed that flag being raised in front of the Saratoga County offices. This flag will fly for 30 days in tribute to a unique man and his lifetime of service.

More in this category: « Leading By Example Saratoga Quarter Launched »
back to top