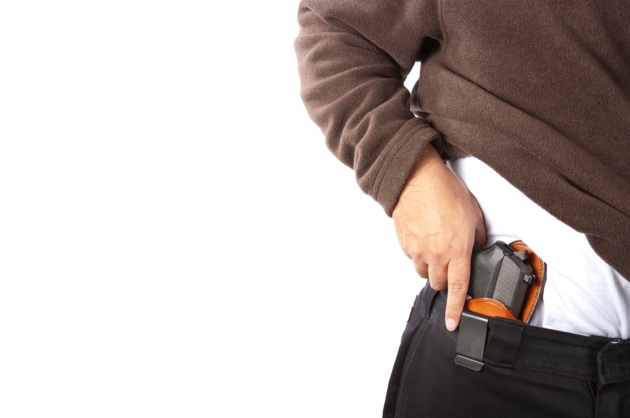 Considering the Call for Armed Civilians

SARATOGA COUNTY – Including the tragedy in San Bernardino, California, there have been 39 mass shootings in the United States so far this year, shootings that resulted in four or more fatalities.

It is in that context that some law enforcement have made statements calling for citizens who are licensed to carry concealed weapons to carry them regularly. The controversial call was most prominently made by Arizona Sheriff Joe Arpaio, who declared the day after the December 2 mass shooting in San Bernardino that he could no longer guarantee the safety of the people of Arizona, and he urged civilians with concealed carry licenses to carry guns and be ready to step up.

The sheriffs of Laclede, St. Clair and Vernon counties in Missouri recently announced they are lowering the cost of concealed carry applications, and here in New York, Ulster County Sheriff Paul Van Blarcum wrote on the Ulster County Sheriff's Office Facebook page on December 3, "In light of recent events that have occurred in the United States and around the world I want to encourage citizens of Ulster County who are licensed to carry a firearm to PLEASE DO SO."

A few months ago, Saratoga County Sheriff Michael Zurlo established an unrestricted concealed carry permit process – new for Saratoga County – and he said that 240 gun owners have since attended the Concealed Permit Course.

“We instruct 60 a month,” said Zurlo. “I don't want people out there thinking they can do whatever with this permit. I'm a big second amendment supporter, but just use common sense. You can't carry a firearm in a school or federal buildings or county buildings. And be proficient in your weapon.”

Saratoga Springs police chief Gregory Veitch agrees. “Yes, an active shooter may be stopped by a citizen with a gun in certain circumstances and as a last resort, and we would all agree that that would be a good thin” he said. “I think we would all also agree that having one or more armed private citizens drawing their weapons, responding to and taking action during an active shooter situation, is not likely to stabilize the encounter or help to reduce the confusion that is sure to be occurring. They may confuse another well-meaning private citizen with a suspect or they may shoot innocent bystanders or responding police officers in plain clothes. They may be mistaken by responding uniformed officers who are looking for an armed person at the scene.”

“The training is two-fold,” said Zurlo. “One is so you can use the weapon and know the state laws, and the second part is to be proficient with the weapon that you own. You need to have a pistol permit for one year. After that, you can take the 8-hour course taught at a gun club by a certified NRA instructor, the first four hours covering the safety of weapons and when you can or can't use it. Then there’s a written test and if you pass that, you continue to the live-shoot course. You are scored at the end, and if you pass that, your paperwork is sent to judge, then there’s another background and another mental health check, and then it’s the judge’s discretion if he wants to give you a permit.”

Gerard Moser, one of the principals and an NRA training counselor with the training firm, had this to say about a civilian response to shooting incidents.

“The first thing anyone should do if they see such an incident is call 911,” said Moser. “It’s extremely important we be a very good witness, that’s one of the things we emphasize in our classes. A lot of folks don’t realize how invaluable that is. In California, a witness called and gave pertinent information that led to that capture [and subsequent death of the San Bernardino shooters in a gunfight with police] so much faster. If he had tried to intercede, he might be dead and we wouldn’t have known who these people were. Your firearm should be used only when your life is in danger.”

It seems to be the sheer randomness of mass shootings, more than anything else, which is particularly challenging for law enforcement and alarming for civilians. The San Bernardino shooting took place at a holiday party at a center that cares for the disabled, undoubtedly as unlikely a place as a movie theater or elementary school. In a survey of New York Times readers last week, there were several thousand responses that stated they think about the possibility of a shooting every day, whether dropping off children at a daycare or holiday shopping in the mall.

Moser stressed that, even with licensure, civilians cannot count on their guns. “Modern minutemen would not be the appropriate answer,” he said. “Whether you are going to carry a firearm or not, people should be aware and prepared for responding to situations. You can’t have a firearm on school property, so you can’t rely on your firearm if you walk into your child’s school and a situation arises. How are you going to secure yourself and your child? What’s the best cover?  It’s important to be aware of your environment and understand how to respond, with or without a firearm.”

“Guns don’t make us safe,” said Jim Fulmer, a member of the Saratoga Peace Alliance. “Our ability to kill won’t make us safer. This is just my personal point of view, but I believe our ability to understand and be involved in a community together makes a real difference. I support hunters, but not killing other people.”

And killing another human being is not as easy as it looks, a cautionary thought proposed by both Veitch and Moser.

“I would suggest that even though it is legal to carry a conceal firearm if one has the proper permit,” said Veitch, “anyone who is considering such a course of action should think long and hard about the burden of responsibility they assume in carrying a weapon. Most gun owners are responsible men and women who often go above and beyond the legal requirements of the permitting process to educate themselves in proper gun safety and handling procedures. It is important to keep in mind, however, that carrying a weapon is serious business and the decision to do so must not be taken lightly. It is one thing to legally carry a gun, it is another thing entirely to use that gun against another person, and simply having a permit and some safety training in handling a weapon does not prepare one for a violent encounter, or the consequences of the decision to use a firearm.”

Moser added that the big challenge with most people in getting a firearm is asking themselves whether or not they would be able to use it.

“It’s something a lot of people don’t think about, but it should be the first thing,” said Moser. “Would you be able to do that [shoot someone], and would you be able to live with yourself if you had to use it? It’s not weak to decide you can’t. Just know that if you’re not willing to use it, you should not be carrying it, because it could be a detriment to you and everyone around you because it could be taken from you and used against you.”

For civilians who do not want to carry guns, as well as for those who do, the NRA came out with a series of courses called “Refuse to be a Victim.”

Ultimately, it seems that everyone agrees that if terrorism is a fact of modern life, that it makes most sense for civilians to learn how to prepare and respond, whether or not they have a weapon, to a possible dangerous situation.

“I cannot give any assurance that Saratoga Springs is safe from an act of terrorism or an active shooter,” said Veitch. “There is always the possibility that this can happen in any community.  As a police department, we train regularly for an active shooter situation and we continually communicate with other law enforcement agencies on these types of issues. My advice to someone who might be considering carrying a concealed weapon is that they must keep in mind their responsibilities when carrying, and not just their legal right to do so. They must remember that the decision to use that weapon comes with the burden to use that weapon properly, legal and ethically. No one is free from the responsibilities and consequences of carrying or using a weapon at all times, not just during an active shooter situation.”

More in this category: « Mega-Mansion Up for Auction Will Less Be Moore? »
back to top