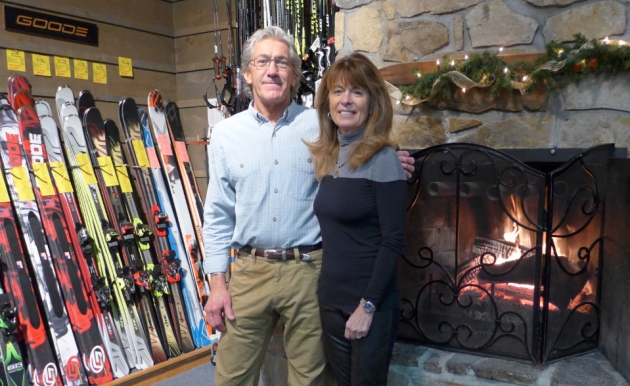 SARATOGA SPRINGS – The Alpine Sport Shop turns 75 this year, a milestone for the family­owned retailer that has served generations of winter sports enthusiasts in the Saratoga region, and was once home to the only “ski­tronic” indoor slope in northern New York. Alpine will commemorate their seven and a half decades of service with an open house event on January 14 from 4 to 7 p.m. at its 399 Clinton Street location in Saratoga Springs.

Originally established in 1941 by Edwin Taylor, Jr. and his wife Joan, the first Alpine Sport Shop was located on Spring Street. After his father (who was a proprietor of another sports shop on Broadway) gave him his first pair of skis, Edwin excelled in the sport, earning himself a reputation as a “pioneer of American skiing” and founding Alpine Meadows Ski Area in Corinth.

The current owners, Cathy (Woodcock) and Jack Hay, met during high school. Jack Hay’s family relocated to Saratoga Springs from Saranac Lake after his father accepted a job as the city’s first engineer. The two were classmates and members of the school’s ski team in the mid-1960s, around the time Cathy’s father, Thurlow Woodcock, was contemplating selling his auto repair business.

“My dad was a great skier,” said Cathy Hay. “He started our family skiing in the 1950's at Darrow's rope tow on Locust Grove Road in Greenfield.  I was four years old.”

With a talent for craftsmanship, the World War II veteran had built both the family’s home in Wilton, and his repair shop, Upstate Auto Bodyworks, himself. But being family friends of the Taylors, Woodcock saw an opportunity to change careers and become a retail merchant in a sport he loved.

He and wife Dorothy purchased the Alpine Sport Shop from the Taylors in 1966. A local advertisement announcing the change in ownership read:

“Jo and Ed Taylor of the Alpine Sport Shop take great pleasure in announcing the sale of the above business to Dorothy and Thurlow Woodcock who will take over June 1, 1966. Business will continue as usual with the same fine lines that have made this store Saratoga’s leading sportwear and ski shop for 24 years.”

Skidmore College, which comprised approximately 60 percent of the Alpine Sport Shop’s business at the time, was in the process of relocating the campus from downtown to its current location off North Broadway. Woodcock followed suit, purchasing a plot of land closer to the new campus, but still convenient to downtown traffic. Then once again, he began to build.

“If he wanted something, he built it,” remembers Jack Hay.

This time, Thurlow wanted a chalet, as authentic as possible in design, to enhance the store’s ambiance and create a ski lodge atmosphere.

“He could weld things, he was an artist...he liked challenges, he had a vision,” said Jack Hay.

By 1969, Woodcock’s vision had materialized into a massive, 5,000 square foot wooden structure, complete with exposed beams, vaulted ceilings, a wood­burning fireplace, and a full, concrete basement. Single­handedly designed and planned himself, Woodcock enlisted only the occasional help of his nephew in completing the project, which has since weathered more than 40 winters and endured numerous redesigns to accommodate the business’ changing needs.

One such redesign took place in the 1970’s, when a change in inventory prompted Woodcock to erect a 42-foot-long indoor training slope made of thick AstroTurf to help teach the Graduated Length Method (“GLM”). Using silicone and polyethylene beads to simulate a snowy surface, lights were installed in different patterns for students to navigate around, enabling them to practice parallel turns on short skis, and graduate to longer skis as they improved. Invented by National Ski Hall of Famer, Clif Taylor, GLM was advertised the “fastest, safest, easiest” way to ski.

“It was a creative way to get more people to ski,” said Jack Hay. He and Cathy Woodcock Hay were married in 1971, around the time these changes were taking place.

In the early 1980s, snowboarding was still in its infancy. But Alpine saw an opportunity and endeavored to adjust their business again to stay on the cutting edge, a style which compliments the fearless nature of the active lifestyle they so passionately promote. The Hays discontinued use of the training slope to provide more space for retail, including a new snowboard section, which was one of the first in the area at that time.

“Stratton was first among the local mountains to allow snowboarding, but only on certain trails,” said Jack Hay, a lifelong skier who began snowboarding in 1986. “When they first started allowing snowboarders [at Stratton] they had to demonstrate their skill before they were allowed on the lift.”

According to SnowSports Industries America (SIA), approximately 30 percent of winter sports participants during the 2014-15 season were snowboarders.

Alpine Sport Shop has grown to provide an impressive range of products and services for virtually any recreational winter need: outerwear, crossover clothing, equipment, accessories, rentals, fittings, tuning services and repair, GoPro cameras, and even local, domestic, and international group trips for all levels of experience.

The company also caters to varying budgets, with options for single day or season long rentals, and day trips that include transportation, breakfast, and lift passes often for less than the retail price of a lift pass alone. The cost of going with Alpine to Okemo Mountain Resort, for example, is more than $30 cheaper than if you go alone. The Alpine Sport Shop’s full list of trip schedules can be found at alpinesportshop.com.

“Four generations of my family have done business with Alpine Ski Shop since its founding 75 years ago,” said Charles V. Wait, President, Chief Executive Officer and Chairman of the Adirondack Trust Company. “We have seen the shop as it was started by Ed Taylor, a veteran of the 10th mountain division, then its sale to Thurlow Woodcock, and now the ownership by my high school ski team classmates, Jack and Cathy Hay. In an age of faceless Internet retail price-cutters it's nice to be able to do business with a multigenerational, family-owned business, with people you can trust.”

As far as the shop’s legacy for the next milestone, the Hays plan to keep Alpine Sport Shop a family-owned and operated business.

“I [think] my dad would be pleased with how we have maintained the integrity of the shop by providing quality goods and service to our customers,” said Cathy Hay. “That would be at the heart and purpose of the business he would expect his family and employees to preserve.”

For more information on Alpine Sport Shop or their open house event on January 14, visit alpinesportshop.com or call 518-584­-6290.

More in this category: « If They Build It, Will They Come? Impact Statement »
back to top