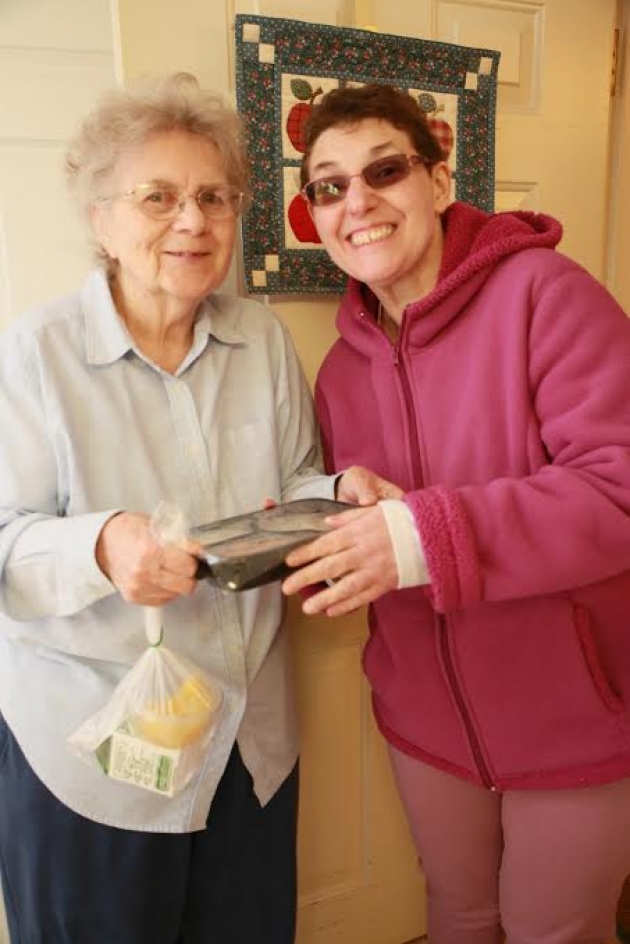 SARATOGA SPRINGS –For over 55 years, Saratoga Bridges has been providing optimum services for people with disabilities, from their residential programs to their day services and beyond. As March is Developmental Disabilities Awareness Month, it’s important to highlight how vital Saratoga Bridges has been in integrating those with disabilities into the community. Volunteering is a big part of these efforts, and individuals at Saratoga Bridges volunteer at dozens of non-profits across the county. One of these volunteer opportunities is with the Saratoga County Office for the Aging’s Home Delivered Meals program.

“Saratoga Bridges helps us to deliver hot, nutritious meals to seniors in Saratoga County,” said Billie Jo McConkey, County Nutrition Coordinator at Office for the Aging. “With the help of the Bridges groups we are able to exist on mainly volunteers to deliver to our 39 meal routes throughout Saratoga County.”

Currently, there are 9 groups of volunteers from Saratoga Bridges that help with Home Delivered Meals –roughly 100 volunteers total. They deliver meals every day, except for weekends, holidays and during extreme weather.

“Our site managers and clients enjoy seeing the Saratoga Bridges folks,” continued McConkey. “We have a symbiotic relationship that helps both of our organizations and we are thankful for their help.”

Dacia Saville, one of the volunteers from Saratoga Bridges, enjoys making the rounds to seniors’ homes and ensuring that they have healthy meals.

“It makes me feel good,” she said. “I love to help the people, they’re so nice.”

Another volunteer, Brian Burnett, is equally glad to be a part of something that helps so many people.

“Elderly people are sometimes unable to cook and do grocery shopping,” said Burnett. “So you’re given the chance to make someone’s day.”

For Catherine Holbrook, a recipient of the Home Delivered Meals, the volunteers that deliver to her home are a godsend. Holbrook had spinal surgery several years ago, which is when she first found out about Home Delivered Meals. Holbrook lives by herself in her apartment, and finds it hard to cook on her own because of her bad eyesight.

“It makes it very easy to have a complete nourishing meal without having to struggle over the stove,” said Holbrook. “If it wasn’t for the delivered meals, I’d probably have to go to a nursing home or rely on my family more for help.”

When it comes to the volunteers from Saratoga Bridges, Holbrook loves how friendly and helpful they are.

“They’re just pleasant people, a happy group that enjoys helping me,” she said. “I’m very content with the services they give. It has helped me stay more independent and live in my apartment by myself. It’s a life-saver for me, that is for sure.”

Individuals from Saratoga Bridges not only help with the Home Delivered Meals program, they engage in volunteerism at many local charitable organizations. For example, Saville and Burnett both regularly volunteer at local animal shelters, firehouses, ambulance rescue squads, the Elks Club, and more.

“My favorite part is giving back to the community,” said Burnett. “People should volunteer because it makes you feel good about yourself.”

When they not volunteering, they like to create artwork for Saratoga Bridges’ own art gallery and studio, Creative Endeavors, as well as practice their Special Olympics events. Saville particularly likes swimming and track and field, while Burnett focuses on cross-country skiing, horseback riding, track and field, and bowling. With their wide range of hobbies, volunteer work, and activism, people at Saratoga Bridges are shattering stereotypes of people living with a disability.

“People with disabilities can do all kinds of things. There may be certain limitations, but it does not mean we’re dumb. We just have a different way of doing things,” remarked Burnett. “Disabled doesn’t mean unable.”

Volunteer opportunities also provide individuals at Saratoga Bridges the skills and training they need for employment. Saratoga Bridges has programs, such as Alpha Career Options, that help people with disabilities find jobs in the community. They can be found working at businesses such as Stewart’s, Walmart, Price Chopper and more – all places where they can be directly involved in the community, interacting and building those necessary skills.

“The individuals we support are blended into the fabric of the community. They have a variety of disabilities, and also a variety of abilities and talents,” said Pamela Polacsek, communications specialist at Saratoga Bridges. “They never fail to impress me with how profound they are and explicit in the way they express themselves. They value and appreciate what life is all about.”

Polacsek, as well as the other staff members at Saratoga Bridges, are passionate about the work they do and the individuals they serve daily.

“I work with a bunch of dedicated, compassionate staff members whose goal is to give people the opportunities to succeed,” continued Polacsek. “Giving support within our agency, as well as through these volunteer sites and businesses that employ our individuals, is encouraging, it’s enriching. I think it enhances the whole community when people are accepted for who they are.”

More in this category: « Viewpoint: The Right Project, in the Right Location, at the Right Time SSHS Grad Makes Division III All-American! »
back to top