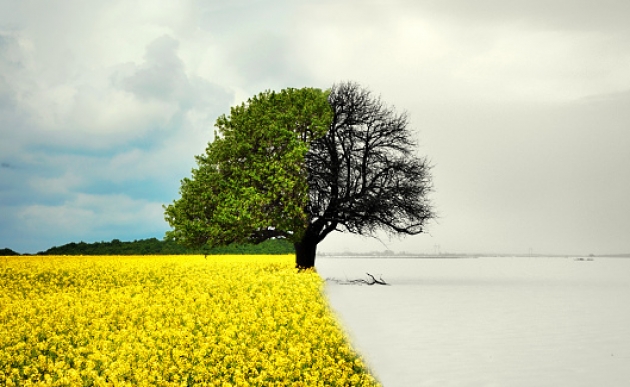 SARATOGA SPRINGS – Anyone that has lived in Upstate New York for some time will know that this past winter was an anomaly. Record-breaking warm temperatures and sparse snowfall made for a winter landscape of green grass and blue skies throughout Saratoga County. In fact, prior to receiving 6 inches of surprise snow on April 4, only 10 inches fell over the course of the entire winter. This strange winter brought with it some interesting consequences for the local economy, affecting businesses, local government and winter activities, both positively and negatively.

Impacts on the County

Keith Manz, Commissioner of Public Works in Saratoga County, oversees winter services such as snow plowing and salting. He saw the impact of the warm weather first-hand.

“Saratoga County has 360 miles of roads to plow. That’s 23 plow routes, 23 trucks, and 46 drivers that plow around the clock. That’s a lot of overtime and fuel,” said Manz.

However, the biggest savings according to Manz was salt. Not only did the county switch over to treated salt, which functions at a lower temperature, stays on roads longer, and requires only half the amount of regular salt, they barely had to use it at all. In comparison to last year, the county saved an astounding $700,000 on salt alone.

“We spent one million dollars last year on salt, and this year, we spent $300,000,” said Manz. “The salt we don’t use we stockpile in our salt shed, which holds about 6,000 tons. We try to keep it pretty full. All the salt we didn’t use will be saved for next year.”

While the lack of snow may be bad for plowers and salters that rely on that paycheck each winter, they are not facing the burn out they felt after last year’s brutal winter. Also, the money saved will ultimately benefit the county and its taxpayers.

“In general, it’s better budget-wise for county residents. We can put that money back into the general fund and do projects we may not have been able to do otherwise,” said Manz. “That money is dedicated to snow and ice control, so we do need to get approval from the committee and the board to use it for other things. My goal right now is to not use any of it until fall, then if something comes up that is a dire need, such as paving a road, we can fix it.”

Few snowfalls can also impact local water supply. Snowpack (snow that has been compressed into the ground) is necessary to refill aquifers and groundwater tables. If snow is very light for a few winters in a row, it can result in drought. On the other hand, too much snow can result in flooding. As for this spring, Manz is not concerned at all just yet.

“You want a nice snow melt in spring to charge the underground aquifers, but we’re not worried about that yet because we’re unsure about how this spring will go,” Manz explained. “We want a wet spring with soaking rains, the type that recharges the groundwater and goes into the soil, not just runs off into lakes and streams.”

Alpine Sport Shop, which celebrated its 75th anniversary this year, felt the repercussions of this out-of-the-ordinary winter on sales of ski and snowboard equipment, as well as sales of other cold weather gear like hats, gloves and apparel.

“We are like ‘snow farmers,’ working a weather-dependent business.  So yes, we feel the pain of a dry winter,” said Cathy Hay, who owns Alpine Sport Shop with her husband, Jack. “Sales are down, and our door didn’t open as often this year. We started off with great enthusiasm, but by mid-November, things began dropping back because it was so warm. It’s like, who is at the beach during a rainy, cold summer? It’s the same concept.”

However, Alpine Sport Shop and the Hays aren’t letting one atypical winter keep them down.

“We’re just going to continue doing what we do – focusing on customer service, our hands-on approach to retail and our great website,” said Hay. “Plans are that we’re coming back with great enthusiasm and doing it all again next year.”

Similarly, ski mountains and resorts also took a hit. Andrea Jacobs, Entertainment Director at Gore Mountain, noted how many customers were unhappy overall with this year’s skiing and snowboarding conditions.

“Many people bought season passes in October when no one knew the kind of winter we would have. Pass holders were forced to come regardless of weather because they already paid for it. It definitely made an impact on the number of people coming for day passes,” said Jacobs. “In past years, people could do 20 runs. This year, they stuck around for three or four runs just to say they did it. But honestly, in spite of the fact we had little snow, Gore did a great job of making snow. We were able to make the most of the very little we had to work with.”

Conversely, his past winter wasn’t all gloom and doom for local businesses. Many actually benefited, and are still benefitting, from the mild winter.

Alpin Haus, which specializes in outdoor recreation, began installing its first pool of the season on March 14, a full month earlier than last year. Even with the snow on April 4, the early start to their season allowed them to react better to the unexpected weather.

“This has been the earliest start of our season in 40 years,” said Jamie Georgelos, manager of the pool division at Alpin Haus. “The goal is to start the first week in April, so starting in March was a big feat for us. The lack of snow and lack of cold weather allowed us to use our excavation equipment sooner. The demand is up this year for pools as well. People have been coming in much earlier than normal. They’ve been thinking spring all winter long.”

Georgelos noted that Alpin Haus’ winter businesses, such as ski and snowboard gear, may have been hurt by the winter, but that it will boost summer businesses quite a bit. Since a large part of Alpin Haus’ sales come from pools, hot tubs, boats and RVs, the warm winter seems to have helped more than hindered business.

Businesses in downtown Saratoga Springs also profited from the warm weather. John Baker, who has owned Gaffney’s on Caroline Street for 35 years, remarked how business is up and that this winter was the best weather-wise  that he can remember.

“Business is up six percent across the board, and our food sales are up by 20 percent,” said Baker. “We’re a month ahead as far as getting our outside set up. Our patio, which is Gaffney’s bread and butter, has already been opened a few times.”

Besides Gaffney’s, most downtown businesses saw much more business than usual this past winter. Not only was travelling and parking easier, but people could walk and shop throughout downtown without worrying about being exposed to extreme cold or excessive snow.

Todd Garofano, President of Saratoga Convention and Tourism Bureau, explained that while the warm winter resulted in canceling some activities, such as The 3rd Annual Saratoga Frozen Springs Pond Hockey Classic, many outdoor events downtown, such as Chowderfest and Flurry Festival, drew record crowds.

“Chowderfest saw a huge increase in attendance, surging to over 45,000 people, a new all-time record,” said Garofano. “With a 50 degree and mostly sunny day forecast, we definitely saw more families with young kids and strollers early in the day. The lack of snowbanks on the sidewalks made it easier to get around.”

This year’s winter undoubtedly left its mark on the local economy, both for better and worse. Some businesses prospered, both saving and making money, while others felt the sting of the peculiar weather’s impact. The only thing left to do is wait it out, enjoy our summer, and see what Mother Nature has in store for Upstate New York next year.