Campaign Builds Against a Word 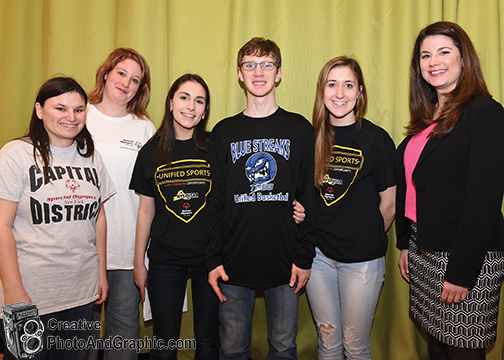 SARATOGA SPRINGS – Beyond the doors of Fingerpaint’s main office on Broadway Wednesday, it was likely that too many people were still using a common word. Inside, a group of people argued that word’s days should be numbered.

“Unfortunately, this word is too often used in everyday conversation,” Jennifer Frame, director of development for the Capital District chapter of New York Special Olympics, told the crowd of about 30.

People had gathered on Wednesday inside Fingerpaint’s spacious office for a Spread the Word to End the Word campaign event. After a few speeches, most attendees literally finger-painted their names on a large banner.

In a statement provided by Fingerpaint, a marketing agency that for several years has teamed up with Special Olympics to promote the campaign, the target is made clear: “”The ‘R’ word is the word ‘retard(ed).’ Why does it hurt? The R-word hurts because it is exclusive. It’s offensive. It’s derogatory,” the statement reads.

“This campaign asks people to stop saying the R-word as a starting point toward creating more accepting attitudes and communities for all people,” it continues. “Language affects attitudes and attitudes affect actions. Pledge today to use respectful, people-first language.”

“The ‘R’ word has to be stopped,” asserted Saratoga Springs High School student Kylie Flynn, who apparently has formed a tight bond in recent years with her fellow senior Griffin Donohoe.

Flynn told the crowd that she finds the R-word “dehumanizing,” which drives her devotion to the local campaign’s complete success. “With every pledge, Saratoga is becoming more inclusive,” she said.

Donohoe spoke briefly and then stood next to Flynn. The pair comforted each other by holding hands as the other R-word campaigners made their statements.

Bo Goliber, a spokeswoman for Fingerpaint, said the R-word campaign is “a cause that’s close to our hearts,” noting how it has picked up a lot of momentum since 2013. Employees of the marketing firm have particularly enjoyed interacting with Special Olympics athletes, she explained.

“At Fingerpaint, we make it a priority to give back in more ways than just writing checks,” Goliber said. “It’s about raising awareness, doing what’s right and engaging with our community and the organizations that are truly making an impact. We love helping however we can.”