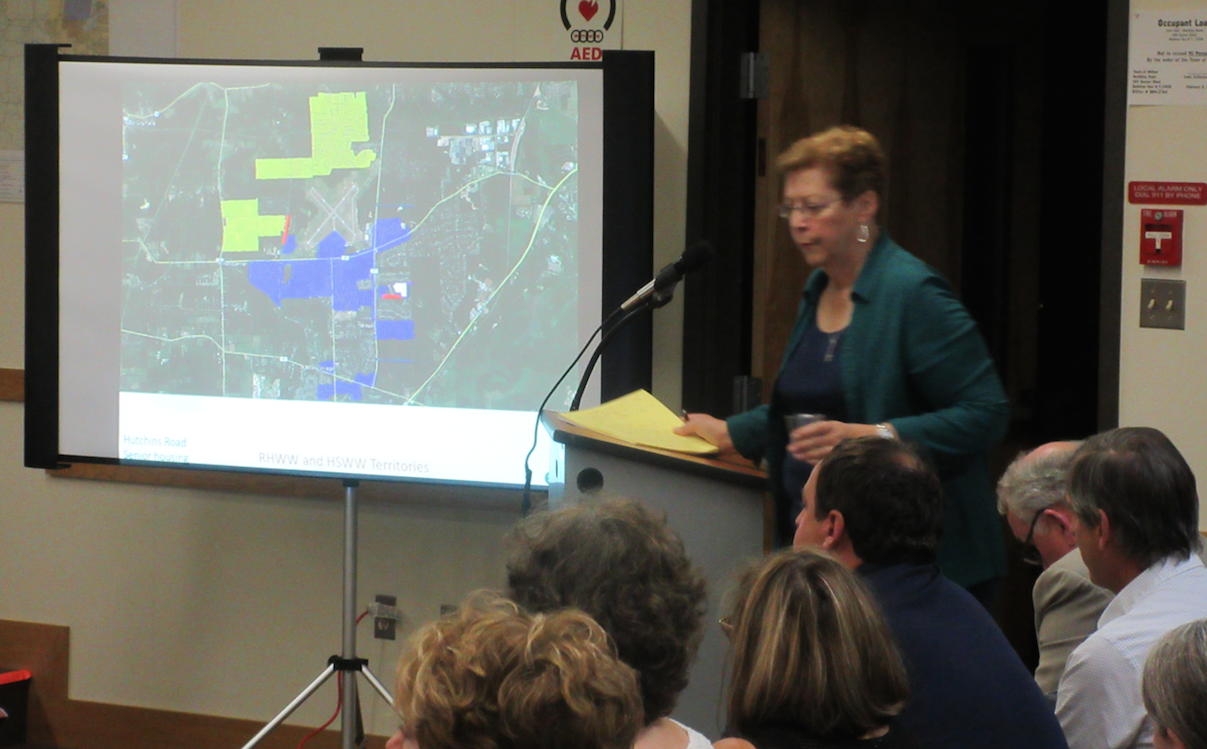 In photo: Hutchins Road homeowner Dorothy Christiansen leaves the podium after her allotted time to speak; Tom Samascott, his son Wayne and Michael Toohey are seated near the podium. Photo by Larry Goodwin.

MILTON — After its usual pledge to the flag of a republic Tuesday night, the Milton Town Board basically allowed one final exercise of free speech regarding a contested construction project that involves 14 acres off Hutchins Road.

For the last time, a Malta developer publicly updated the board about his plan to raze one house and build 80-plus apartments behind that property in the quiet, wooded area. The units would be designed specifically for Saratoga County’s aging citizens

“That is land that is going to be developed. You can’t leave it dormant. It’s not going to become a park,” concluded Saratoga Springs attorney Michael Toohey, who again gave a presentation in favor of the project. Toohey did the same at a similar public hearing in July.

“We think there’s a tremendous benefit to the town,” Toohey added, “for decades to come.” He cites statistics indicating that the county’s population over age 55 will increase to 90,000 by 2030, from the current level of more than 40,000.

Then board members welcomed a lengthy rebuttal from the woman who, for months, has led the plan’s most vocal opponents. “There are a lot of questions that still need to be addressed,” stated Hutchins Road homeowner Dorothy Christiansen.

The town board had deemed the exchange necessary in response to a Sept. 19 letter that was sent to residents by Thomas Samascott of Malta Development.

Samascott sent his company letterhead to dozens of residents on Red Oak Lane and White Oak Path in Milton, using capital letters to convey a sense of urgency about the project site less than a mile away. He requested that residents “contact each of the TOWN BOARD MEMBERS listed below and push them to approve my project.”

“In an effort to gain approval for my Hutchins Road 55+ community I am going to agree to secure a source of water and also run the pipes in the streets of your neighborhood,” Samascott wrote. “The one catch is that if I do not get approval for the 83 senior units on Hutchins then I will simply build single family homes which I already have enough water for and then I will not secure the ADDITIONAL SOURCE OF WATER or run the water line in your neighborhood.”

According to Toohey, Samascott has committed to spending a total of about $432,000 for water line extensions. Samascott had announced previously that he reached an agreement with Heritage Springs Water Works for his main Hutchins Road supply.

A vote is required to change Milton’s residential zoning code and establish a Planned Development District for Samascott’s project to move forward. It would impact two 50-year-old neighborhoods of single-family homes between Hutchins and Margaret Drive, connecting them with a new roadway.

Most owners of existing homes in the area signed petitions opposing the apartment complex, but now say they would prefer to see more single-family houses built.

“Absolutely. I’d love to see houses there. The major issue is where does Milton want to go as a community,” exclaimed Christiansen, before her time at the podium had ended. She was a primary organizer of the petition drive.

Milton Supervisor Dan Lewza said he was unsure at which board meeting in October—either Oct. 4 or 18—a formal vote on the zoning change would take place.

Samascott, Toohey and their associates had left the Milton town complex before the public comment section of the meeting. Still, local residents took full advantage of the opportunity to voice their concerns.

“For Mr. Samascott, this is about money,” argued Hutchins Road homeowner Cindi Cox, whose backyard abuts the project site. (Her husband, Ralph, had kindly brought Christiansen a cup of water during her presentation.)

“It would be like a dream come true to have public water,” Handley said.

Saratoga Springs developers Bruce and Tom Boghosian urged the board members to scrutinize the information presented by Toohey and Samascott for accuracy.

“That’s what’s so distasteful in this town,” stated Tom Boghosian, after alleging that a number of “misrepresentations” were made about the Hutchins Road project with no attempts by board members to clarify them.

Boghosian called it a “threat” for any developer to send a letter to residents suggesting that, without an approval, “you’re going to have crappy water for the rest of your life.”

More in this category: « Hearty Meal Offered to Benefit Treatment for Alcoholism ‘Trail to Nowhere’ Heads to Court »
back to top