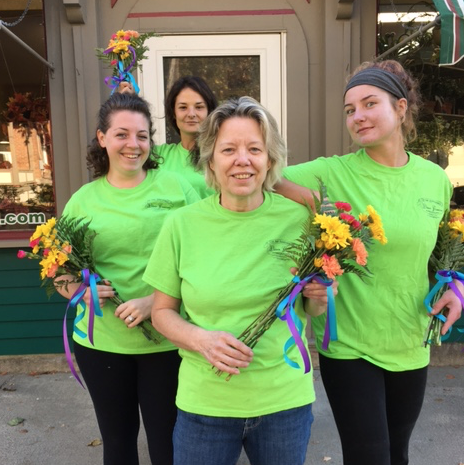 The team of Dehn's Flowers ladies who will give out flowers on Oct. 11. Photo provided.

SARATOGA SPRINGS – Dehn’s Flowers will be hitting the streets of Saratoga Springs and Milton on Wednesday, Oct. 11 to hand out hundreds of flowers to busy commuters to brighten up their week, as part of a national “Petal It Forward” campaign.

In partnership with the Society of American Florists (SAF), of which Dehn’s Flowers is a member, the 125-year-old city business is joining more than 200 florists across the country to promote Petal It Forward.

According to head designer Deb Converse, the gifted flowers will not be distributed from within the company’s two locations. Instead, four staff members will approach people at will on sidewalks and elsewhere during normal business hours.

“Our teams will be on the move,” Converse said. “The whole idea of Petal It Forward is to get out in the community. It’s so fun to see people’s reactions.”

Aside from the value of practicing random acts of kindness, the Petal It Forward campaign was organized in response to data released by SAF showing the positive emotional benefits of both giving and receiving flowers. With that in mind, Dehn’s will provide an extra bouquet to share with a loved one, coworker or even a stranger.

“We see the positive impact day in and day out when we make our flower deliveries,” said Dehn’s spokeswoman Lynn Straight, in a prepared statement. “People love flowers ‘just because’ so we wanted to create random smiles, and give people a chance to do the same for someone else.”

A recent SAF survey of 2,500 people found that 76 percent agreed that having flowers in the home or office improves mood. Nearly four in 10 of the respondents indicated that florists have helped them in a past or current relationship.

“The impact of giving or receiving flowers is powerful and memorable,” said Straight. “It can turn an ordinary day into an extraordinary day.”

The main store and greenhouses of Dehn’s Flowers are located at 180 Beekman Street; the company’s Milton satellite branch is located at 15 Trieble Avenue.

For more information, visit www.dehnsflowers.com or contact the stores by email at This email address is being protected from spambots. You need JavaScript enabled to view it..