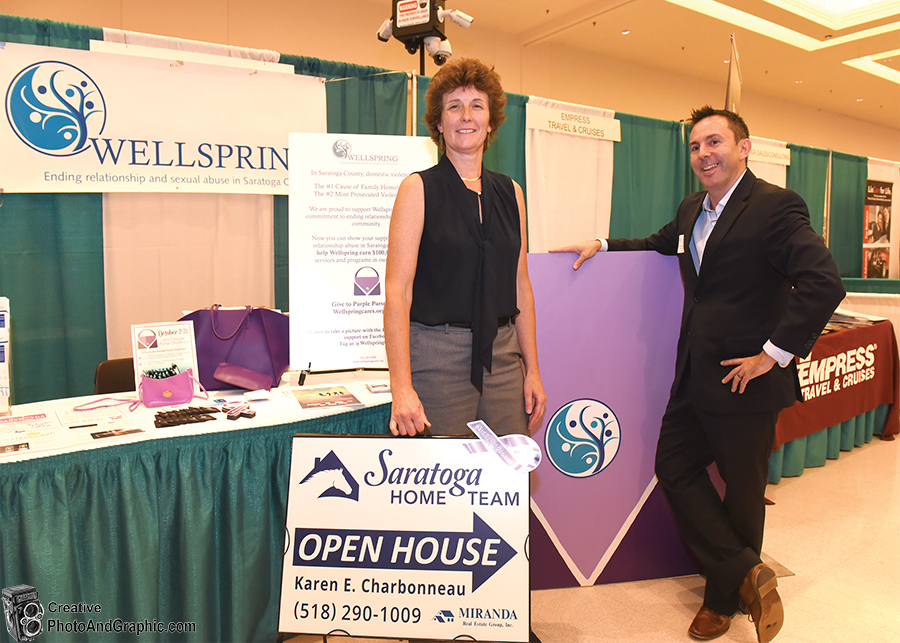 In photos: Karen Charbonneau and Paul Budlong promoting their respective causes in the Saratoga Springs City Center; a scene from the “Girlfriends Helping Girlfriends” social mixer to benefit Wellspring held at Longfellow’s on Wednesday, Oct. 11, 2017, both by www.photoandgraphic.com; and Karen Totino in her Green Conscience showroom at 33 Church Street, by Larry Goodwin.

SARATOGA SPRINGS – The staff and supporters of Wellspring on Broadway—the largest organization in Saratoga County working to end domestic violence and serve those affected by it—are in the midst of an ambitious fundraising campaign, which features events at various businesses in and around the city.

The goal is to raise enough local money to qualify for a $100,000 grand prize provided by the Allstate Insurance Foundation.

The foundation’s “Purple Purse Challenge” awards a total of $700,000 to groups nationwide after the completion of similar campaigns through October, which is known as Domestic Violence Awareness Month.

Maggie Fronk, the executive director of Wellspring, said that many years of raising awareness in local communities has led to “a better understanding” of domestic violence. “Folks are coming in to get the help they need,” she said.

However, Fronk noted, “we still see a problem.”

In its literature, Wellspring defines domestic violence (also known as “intimate partner violence” or “relationship abuse”) as “a pattern of coercive behavior/tactics used by someone against a current or former intimate partner, dating partner, or spouse in an attempt to gain or maintain power and control.

“Types of abuse can include physical, sexual, psychological and economic abuse. These same behaviors can also be perpetrated against family members.”

Paul Budlong, the director of development at Wellspring, reported that the agency serves nearly 800 domestic violence victims in Saratoga County every year. Individuals and families are assisted through the process of obtaining legal restraining orders or finding various types of temporary housing, he said.

Fronk said that amounted to roughly $26,000, in addition to local donations of about $51,000. The agency’s funding is provided mainly by such donations along with federal, state and local grants, she added.

This year’s scheduled events included a “Girlfriends Helping Girlfriends” evening at Longfellow’s on Oct. 11; an event at Nanola on Oct. 12; a book club gathering at Northshire Bookstore on Sunday, Oct. 15 at 4 p.m.; a “karma cycling class” at Saratoga Cycling Studio on Wednesday, Oct. 18 at 5 p.m.; and a beer tasting and dining benefit at Kraverie on Saturday, Oct. 21 starting at 4 p.m.

According to a statement, real-estate agents Karen Charbonneau and Karen Totino are also teaming up next week for a reception to benefit Wellspring. They will announce the formation of their new Saratoga Home Team venture as well.

“Domestic violence is a huge contributor to family homelessness,” stated Charbonneau, a licensed associate real-estate broker, U.S. Army veteran and former youth sports coach. “Karen Totino and I are honored to be able to combine the launch of our real estate team with support for a vital community charity like Wellspring, that provides resources for those experiencing abuse.”

Totino is the owner of Green Conscience Home and Garden at 33 Church Street, where the Saratoga Home Team ribbon cutting and Wellspring reception will be held on Tuesday, Oct. 17 starting at 4 p.m.

“One of the Saratoga Home Team’s core values is to bring compassion to our business and our clients,” Totino offered in the statement.

Fronk expressed gratitude for all of the businesses and local individuals who are rising to meet this year’s “Purple Purse Challenge,” despite a seemingly endless barrage of negative media headlines from around the country.

“Every day we see how kind, compassionate and generous people in our community are,” Fronk said.