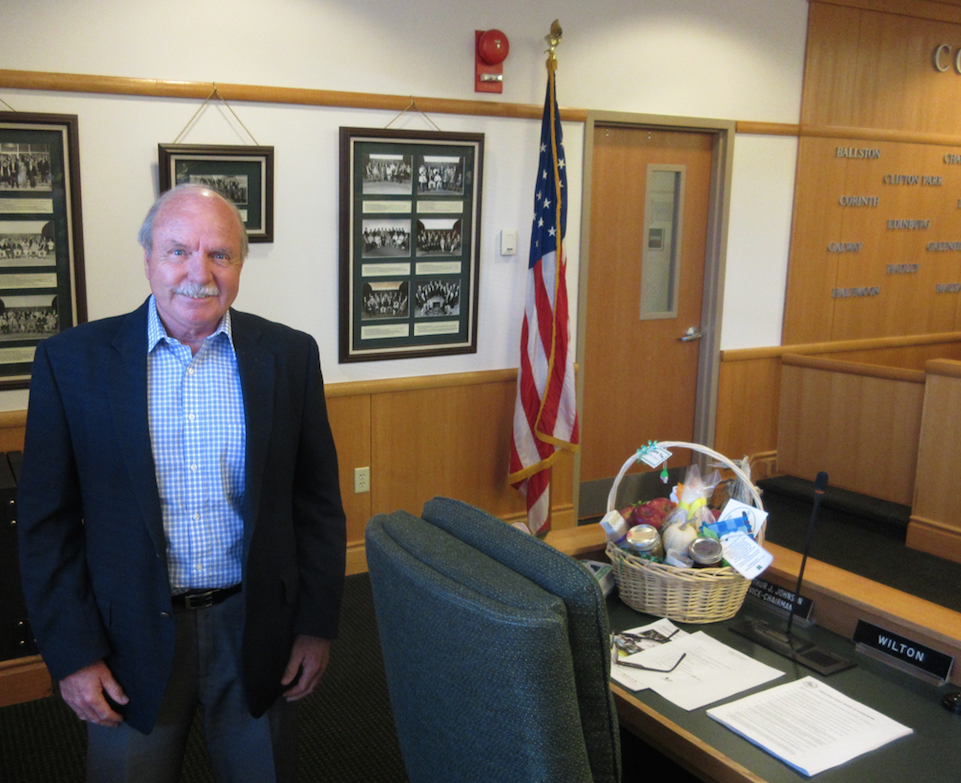 In photos: Wilton Supervisor Arthur Johnson prior to a recent meeting of the Saratoga County Board of Supervisors, by Larry Goodwin; and Nancy Dwyer during a break from her political campaign in Wilton, by www.photoandgraphic.com.

WILTON – Since the first week of June, a real estate broker and former math teacher has knocked on hundreds of doors at homes in Wilton to garner support for her campaign to unseat longtime Republican Supervisor Arthur Johnson.

“Knocking on doors energizes me and is my most favorite part of campaigning,” says Nancy Dwyer, who started a new line on the Nov. 7 election ballot called Public Servants. A sample ballot for the Town of Wilton provided by the Saratoga County Board of Elections also lists Dwyer on the Democratic line for supervisor.

“I love meeting the people of this town and the one thing that stresses me the most is the time constraints prohibiting me from knocking on every door,” Dwyer added, noting how there are more than 11,000 registered voters in Wilton.

Johnson has run unopposed for supervisor since 2002, after serving as the town’s deputy supervisor in his seat on the Wilton Town Board. Prior to that, he served as the town assessor for nearly 15 years.

“My long-term goal is to build on our successes, provide quality of life, plan for the future and make Wilton the best place to live,” Johnson said.

Both candidates were asked to provide emailed responses to questions about this year’s contested election.

In addition to her recent professional work as a licensed real estate broker, Dwyer taught math classes in the Ballston Spa Central School District for eight years and has volunteered or raised funds for such groups as Sustainable Saratoga and the South Glens Falls Marathon Dance.

Dwyer, who received an endorsement by the Democratic Party, said she devised the Public Servants line out of a strong belief that elected officials should “work for the people, not party, not special interests.” She claims that 23 percent of voters in Wilton are like her in preferring “no party affiliation.”

Dwyer said that message “is really hitting home with people regardless of their registered party affiliation.”

Moreover, considering in particular Johnson’s tenure as supervisor, Dwyer said that many residents told her the “lack of competition and accountability” in Wilton has resulted in widespread “complacency.”

“New energy does not translate into more energy,” Johnson responded. “I am at town hall every day working diligently for our residents on a full-time basis.”

“I agree that there is some voter complacency and that can be for a variety of reasons,” the supervisor continued. “I would like to think that it is because the residents are happy and satisfied with no apparent need for changes.”

Johnson indicated that he is “not sure” about the reasoning behind the lack of accountability that Dwyer mentioned. “The entire town board has been responsive to the public,” he said.

Johnson pointed to a recent finding that Wilton’s official town website, in terms of “information and ease of searching,” ranked higher than most others in the Capital Region.

“As far as I’m concerned,” he added, “the town is open and transparent and accountable to the residents.”

More in this category: « Milton Faces Difficult Choices in Three Resolutions Salvation Army Bell Ringers Needed To Help Those in Need »
back to top