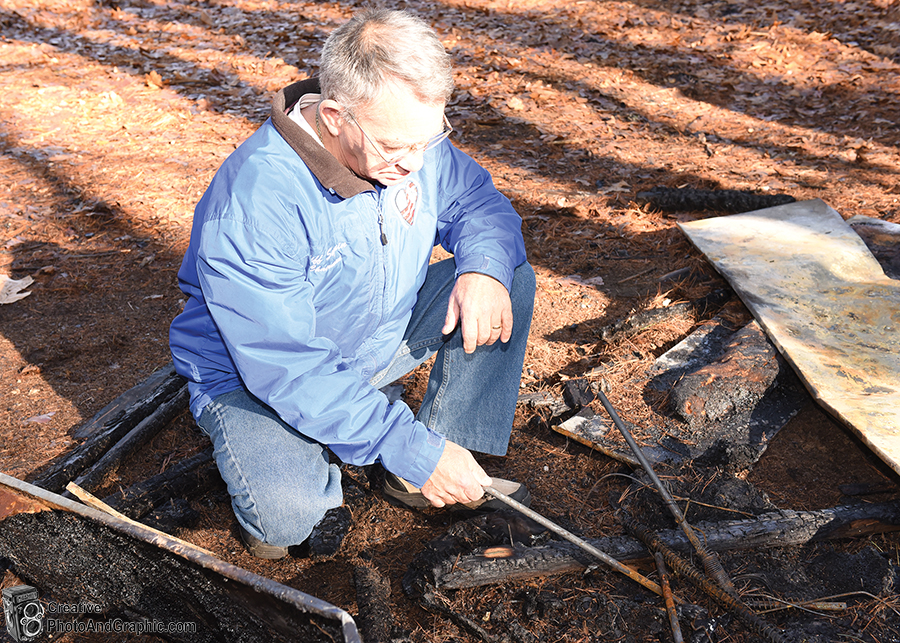 Cliff Seguin with the ruins of his Operation Adopt A Soldier storage shed. Photos by www.photoandgraphic.com.

WILTON – Cliff Seguin said that he will not let the destruction of monsters, fog machines and other props interrupt his nonprofit group’s mission of lifting the spirits of U.S. soldiers during the holidays.

A storage shed owned by Seguin’s Operation Adopt A Soldier, situated near Gavin Park, was destroyed in a fire on Sunday. It was being used to store electronics and props valued at about $3,000, which the group utilizes for haunted hayrides given in the park each autumn.

“We’re going to come out of this stronger than we were,” offered Seguin, when contacted this week for comment. He said the shed was not covered by insurance.

Lt. Jeff Brown of the Saratoga County Sheriff’s Office said there was no “cause” found in the ruins of the storage shed, which did not have electric service.

“It’s definitely a suspicious fire,” Brown said. “We’re investigating it as an arson.”

Seguin, who founded Operation Adopt A Soldier in 2004 along with Dominick Commisso, explained that the group’s volunteers are in the midst of sending hundreds of holiday packages to active-duty military personnel and would not be deterred by the blaze.

“We’re doing it all for the soldiers,” he said.

More in this category: « ‘Workforce Housing’ Units Planned for Route 9 in Malta Woman Receives $300,000 for Specialty Farm in Moreau »
back to top