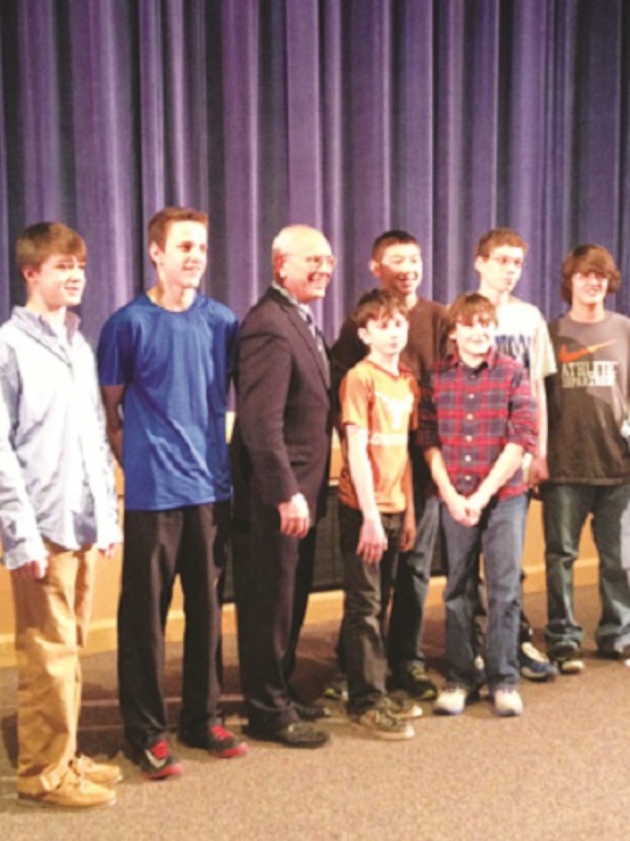 After introducing himself and describing a typical day serving in Congress, the question and answer session opened up with a student named Samantha immediately diving into the hard-hitting issues, asking Tonko why he supports hydraulic fracking.

Tonko responded without hesitation, explaining that he “doesn’t necessarily support” fracking and that the method needs to be further researched in several areas before it should be implemented in New York.

From there, students continued to ask the Congressman questions that are also currently being asked by adults all over America, including the steps he wants taken against gun violence as well as how he will work to protect law-abiding gun owners, both questions that have been hotly debated since the Sandy Hook school shooting.

Addressing both questions, Tonko explained that society was different when the Second Amendment was written and that it now needs to be read “in the right context.” Tonko went on to say that “gun rights are protected and will stay protected,” though “there will be a huge debate on the types of gun restrictions,” adding that “magazine clips offer another opportunity for mass shootings.” He also said that there needs to be a thoughtful discussion on mental healthcare.

“We will provide what is essential while protecting your Second Amendment rights for protection, hunting and target shooting,” Tonko concluded.

A few students also questioned the way Congress maintains its finances and the country’s budget. A student named Josh asked why Congress created an unsustainable budget, while another student asked Tonko’s opinions on privatizing Social Security.

“Why does Congress think having over a trillion dollars of debt is acceptable?” asked one eighth-grader named Kristin.

“There has always been debt,” Tonko answered. “And there always will be. The issue is to break down the debt so the economy grows faster than the debt—we’re making efforts in Congress to bring it down in the next decade.”

Tonko also got a chance to take a shot at Tea Party politics in Congress when a student asked him what he can do for the homeless who have to be outside in the freezing New York climate.

“We need more human services programs for homeless people,” Tonko said, adding that he was able to open up a shelter in his hometown of Amsterdam, which took in over 200 homeless people during the recent bout of freezing weather. “I’d love to do battle for economic and social issues.”

Tonko added that the 112th Congress was “deemed the most dysfunctional term in the history of the House,” blaming the “rigid, far-right Tea Party thinking inside the House” for using “stall tactics, disinvesting in research and disinvesting in job creation.”

“People are upset about the gamesmanship that has been gripping Congress,” Tonko said.

After answering a few more questions from the interested students, Tonko concluded his question and answer session with the eighth-graders but stayed longer to meet some of the students and discuss some of his answers with them.

“I was impressed [with the students],” Tonko said.  “I think they showed great academics and thoughtfulness. Quality begins and ends with sound dialogue, and this is the soundest you could look for—I thought they were up on their studies and their issues and they had a sense of goal that I could interpret into their questions."

Tonko said that speaking with the students was motivating for him.

“Coming here and hearing that perspective and seeing the depth of their attention to the issues fills me with hope,” Congressman Tonko added. “The next generation is prepping itself, as they should—they’re the inspiration for all of us, and I thank them for that bold inspiration.”

More in this category: « Highly Modern Medicine: How Wilton EMS is embracing technology to help save lives Keeping Saratoga Viable: SEDC's Schneider Honored with National Award »
back to top