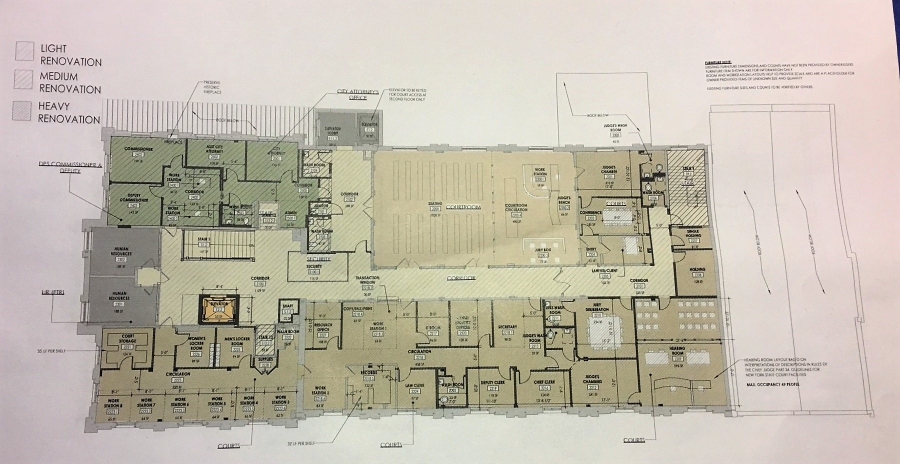 SARATOGA SPRINGS – The cost to reconstruct and restore City Hall is anticipated to carry an approximate $11.2 million price tag, city officials said this week. Insurance proceeds are expected to cover roughly half of the total project cost.

City Hall was rendered unusable following a mid-August lightning strike after a drainage pipe on the roof was struck and melted, causing heavy rains to pour into the building which has served as the center of Saratoga Springs’ government since 1871.

The plans call for a new public elevator, which is not covered by insurance, to be installed in the building - with the existing elevator designated for employee use – the relocation and re-design of city department offices, and an audio/visual booth, concession area and entryway lobby installed in an upgraded Music Hall on the building’s top floor. Costs associated with the Music Hall and new lobby are estimated at $1 million.

Additional changes include state-mandated renovations of city courts and a new energy compliant heating and cooling system for all of City Hall. Finance Commissioner Michele Madigan said there are rebates available from National Grid to help offset the utility costs on the back-end, and that the improvements will help reduce utility costs in the future.

MEP (mechanical, electrical and plumbing) systems are expected to account for about $1.4 million of the overall costs, court-related development costs account for just over $1 million, and cost of the new four-stop elevator set at about $200,000.

The work is slated to take place in two phases, explained DPW Commissioner Anthony “Skip” Scirocco. The job of asbestos abatement, which will take four to six weeks to complete, will be put to bid in early December and awarded prior to the end of the calendar year, Scirocco said. The construction renovation phase of the job is anticipated to be put to bid in March, with construction to commence in the spring. The council is hopeful City Hall will be set to re-open by late 2019.

Since the building’s closure, city employees have mainly been relocated to the southside city recreation facility on Vanderbilt Avenue. Saratoga Springs City Court sessions have been moved to 65 South Broadway, in the Lincoln bath building house, and public city meetings are currently staged at the Saratoga Springs City Center on Broadway.

The building’s ground floor will largely be occupied by the public safety department; The first floor will be comprised of the Mayor’s office, City Clerks office, Finance and Accounts departments and City Council room – all of which have traditionally been located on the first floor, as well as the addition of the DPW offices.  Floor two will showcase the city court, as well as house offices of the city attorneys, the human resources department and the public safety commissioner and deputy commissioner. The top floor will feature the Music Hall and lobby, as well as several building department and Land Use offices. The existing Saratoga Supreme Court Law Library will be relocated elsewhere.

Finance Commissioner Michele Madigan, who this week brought to the council the proposed $47.1 million general operating budget for 2019, said the impact of the lightning strike was most evidently felt in the City's Capital Budget – with $5.3 million of the 2019 Capital Budget attributable to the reconstruction and restoration of City Hall. “The remaining $5.9 million for the reconstruction of City Hall will come from capital already bonded, city reserves, and insurance proceeds,” Madigan said. “The lightning strike at City Hall on August 17 resulted in a 2019 City Budget process unlike any I've experienced before.”

The proposed general operating budget for 2019 shows an increase of roughly 2.1 percent, or $960,000, over the 2018 budget. Contractual wages and new hires account for the bulk of the year-over-year change, with personnel up 4.4 percent in total in 2019, said Madigan, adding that the city is in excellent financial health.