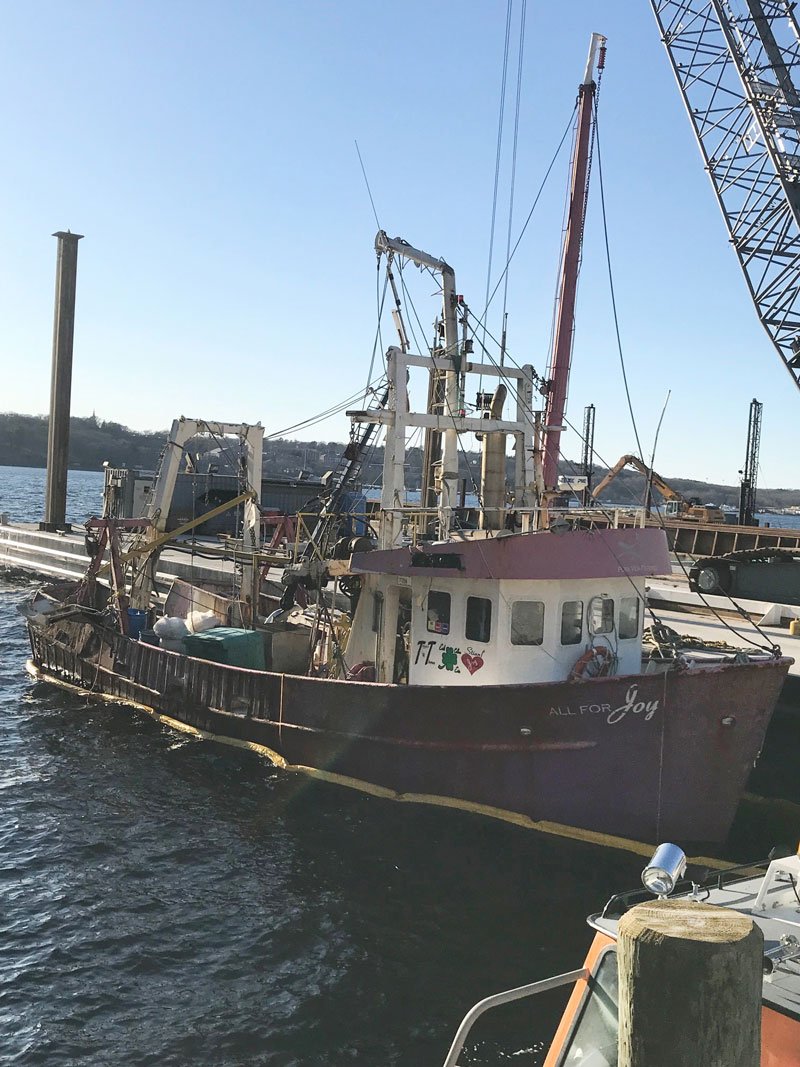 All For Joy, after the accident, docked in Greenpoint, NY. Photo provided by Richard Lofstad.

SARATOGA SPRINGS — Richard Lofstad figures this summer will mark his 10th year, give or take, as a vendor of seafood at the Saratoga Farmers’ Market, which celebrates its official season opening on Saturday at High Rock Park.

“My main source of income is catching fish,” explains Lofstad, whose family produced about 6-1/2 million pounds per year of seafood during the 1980s and ‘90s. In March, he narrowly avoided physical tragedy, but sustained a blow to his business when the veteran captain saw his 55-foot boat seriously damaged during a storm off the coast of Montauk.

“I got the boat almost three years ago when I was up in the Bay of Fundy in Nova Scotia. I bought it from the owner and put in all-new everything: new engine, new generator, electronics, hydraulics,” he says. At the suggestion of his then 3-year-old daughter, Lofstad painted the boat pink and purple and named her All For Joy. Overall, he figures he spent about $350,000 getting the vessel up to speed. Annual insurance on the boat would have set him back another $18,000 annually. Given the amount of funds dedicated to making the boat operational, the insurance would have to wait.

Two months ago, he was navigating All For Joy through a storm off the coast of Long Island. “It was the first Sunday of March. The boat was floating for 2-1/2 hours and we were steaming at five miles an hour, keeping up. One compartment was flooded, but the rest was fine,” he recalls.

“The boat was just so heavy and low because of the water and the fish holds that I couldn’t get away from the waves that were piling on deck. The winds got stronger and stronger. They started blowing about 35. The waves were like 10 feet sticking up and just pouring on deck,” Lofstad says. “She just couldn’t right herself. I got off and then – boom – she rolled, literally flipped over, 10 seconds after I got off it.”

The boat was well-built, he explains, flipped over, but never sank. She drifted 20 miles to the west on the incoming waves and then drifted back east and ran aground, upside down, at Fishers Island on the eastern end of Long Island Sound.

“(The Coast Guard) flipped it over, resurrected it and handed it back to me and now the boat’s in Greenpoint, NY,” Loftsad says. The cost for repair is prohibitive. “It’ll cost like $200,000 and I don’t know if it’s worth it to fix it. I don’t have the money and the problem is nobody’s lending money for a fishing boat, so, I’ll have to figure something out.”

This year’s weekly Saturday market will feature over 65 vendors selling fresh produce, flowers, prepared foods, and more. At Wednesday’s market, weekly from 3 p.m. to 6 p.m., nearly 30 vendors will be providing the same range of items. Beginning in 1978 with a handful of vendors in a parking lot, the market has grown to be one of the largest in the area. For more information, go to: www.saratogafarmersmarket.org.

More in this category: « It's O-Fish-ial, Spring is Here Gateway House of Peace Celebrates 5 Years »
back to top