SARATOGA SPRINGS — Some businesses shut their doors during the 2020 pandemic, but Maura Pulver, owner of Five Points Market & Deli, used the restrictions as an opportunity.

Pulver created Simply Food by Maura to continue her tradition of great breakfast sandwiches and homemade Take 5 Dinners. She also hopes to expand her business focus to private catering.

“Life comes with many opportunities. Sometimes I have even been fortunate enough to latch onto them, and while change can always be scary, it also brings new and exciting memories that we are not yet aware of. I call this a chance to Get to the Point,” Pulver wrote on Facebook. “I will only be down the street. I will still be making breakfast sandwiches…with some mad crazy additions. I will be adding additional Take [five] dinners during the week. And I will be catering. I will take some wonderful Five Point traditions with me and create some new and fantastic ones.”

Pulver plans to sell her breakfast sandwiches out of a commercial kitchen at the Saratoga Springs Senior Citizen Center. In addition to breakfast, she will begin a catering business and continue a popular take-out option she offered at Five Points, called Take Five Dinners.

So far, Pulver has released menu details for Simply Food. Some items include: the Points Classic made up of two eggs, american cheese, choice of sausage, bacon or ham on toasted hard roll and the Blueberry Bomb made of two eggs, sausage, cheddar with a maple syrup drizzle on grilled blueberry bread.

The doors to Five Points officially closed Aug. 31 after Pulver had owned it for eight-and-a-half years. Just like other downtown businesses, Pulver had reduced her staff, menu and hours of operation due to the pandemic. She then used her extra time to create her new catering business.

On her website, Pulver states that loyalty points from a Five Points account can carry-over to Simply Food by Maura. Free lunches on Saturday and Sunday will also continue at the new location.

“The support of the community has been so very generous, we look forward sharing this small gesture with our neighbors as long as there is a need to do so,” Pulver wrote on her website.

She added: “In a year of pandemic pivoting, I have arrived at a new point in my journey. Over these challenging months I have been fortunate to continue doing what I love…simply feeding my community. Whether our simple free lunches, deliciously simple Take Five Dinners and take out, or our creatively simple catered covid celebrations. I have been in my element.”

Simply Food by Maura will be located at 5 Williams Street and her website can be reached at simplyfoodbymaura.com.

Get to the Point! 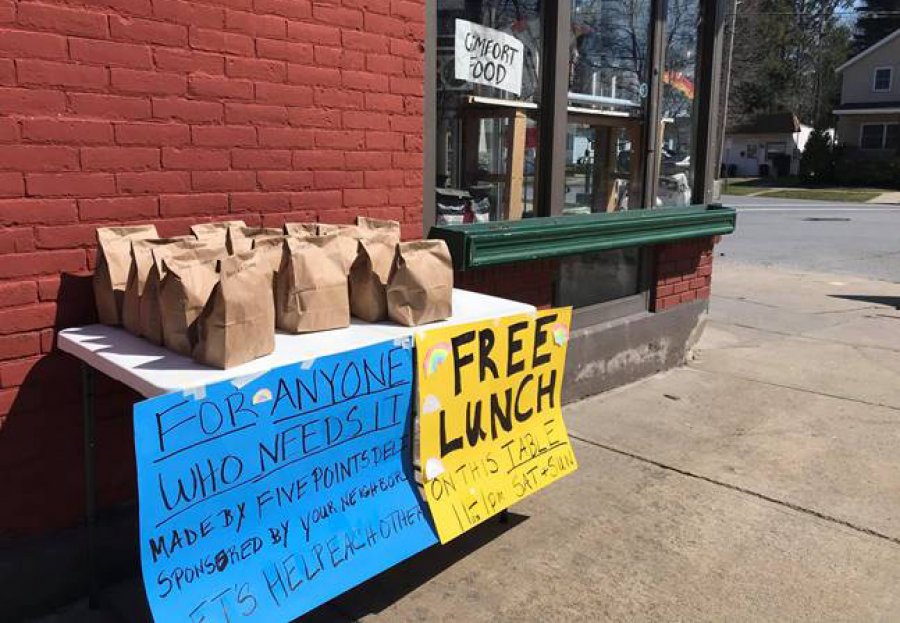 SARATOGA SPRINGS — Maura Pulver stood behind the counter of the Five Points Market & Deli, which she has owned the past eight years. The east side eatery has served the neighborhood for more than a century.

Last week, one of the neighbors reached out to Pulver to express some concerns.

“One of our regulars - she has three elementary school age kids – she said she and her husband were concerned about kids perhaps not getting meals,” Pulver explained. 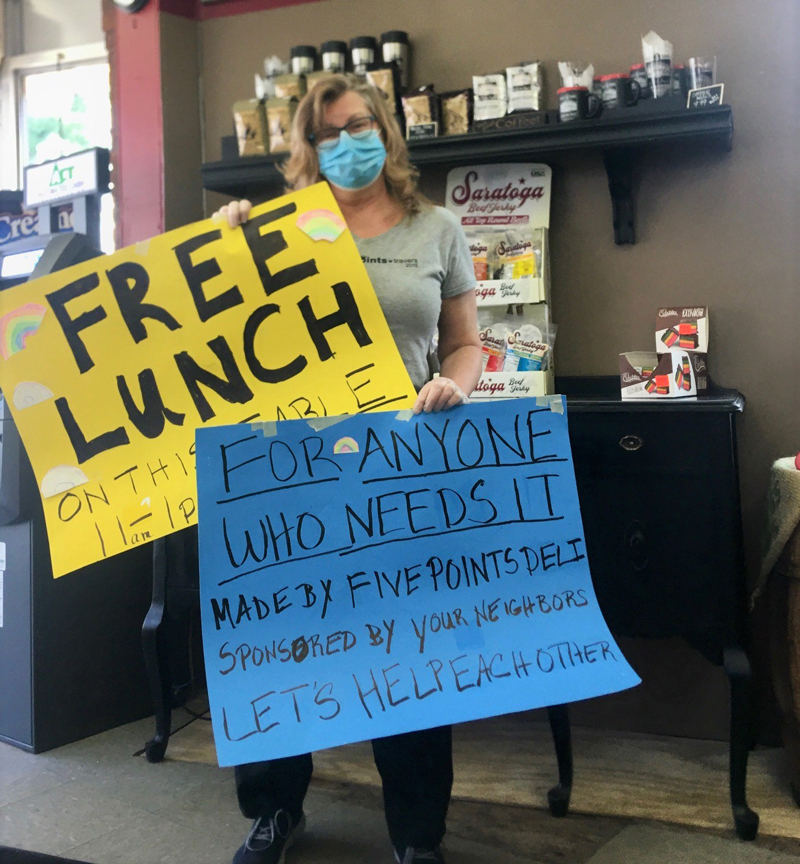 Maura Pulver poses inside Five Points Market & Deli with a pair of handmade signs that will be fixed to a table on weekends offering “free lunch,  for anyone who needs it,” while supplies on the table last. Photo by Thomas Dimopoulos.

With New York State on “PAUSE” and the closure of schools extended through at least May 15, the woman, Jenn McMahon, was brainstorming an idea for weekends that would complement breakfast and lunch availability for students provided via the Saratoga Springs School District.

“She was thinking about that kid, just riding by on their bike, who maybe didn’t get breakfast this morning,” Pulver said. “I thought, oh my God, I love that; Let’s make it happen.”

The fruition of the idea was to set some sandwiches upon a table outside the store during weekends providing a free lunch for anyone who needs it.

“So I asked her kids to make the signs for it and this past Sunday was our first day of doing it. I put them out there - sandwiches, a nice little package. Some cold cuts, some peanut butter & jelly, some cheese, an apple and potato chips, and some baked cookies,” Pulver said. “There were about 15 of them and by 1 o’clock they were all gone. Jenn ants to do it every Saturday and Sunday, from 11 to 1, and she said: ‘We’re just very fortunate right now that we can help out, and I can probably pay for a month’s worth.’”

Area residents either out for a walk or perusing social media where images of the table fixed with bright blue and yellow hand-made signs topped by an offering of small brown lunch bags went viral were moved by the gesture.

“Let me tell you what happened: when the neighbors heard about it, they came by and took pictures of the table and since Sunday people have been handing me money to have it continue,” Pulver said.  “Now we’re thinking about maybe adding another day, or maybe increasing the numbers. We want to keep it going for as long as we can.”