Another Local Mayor Opts Out 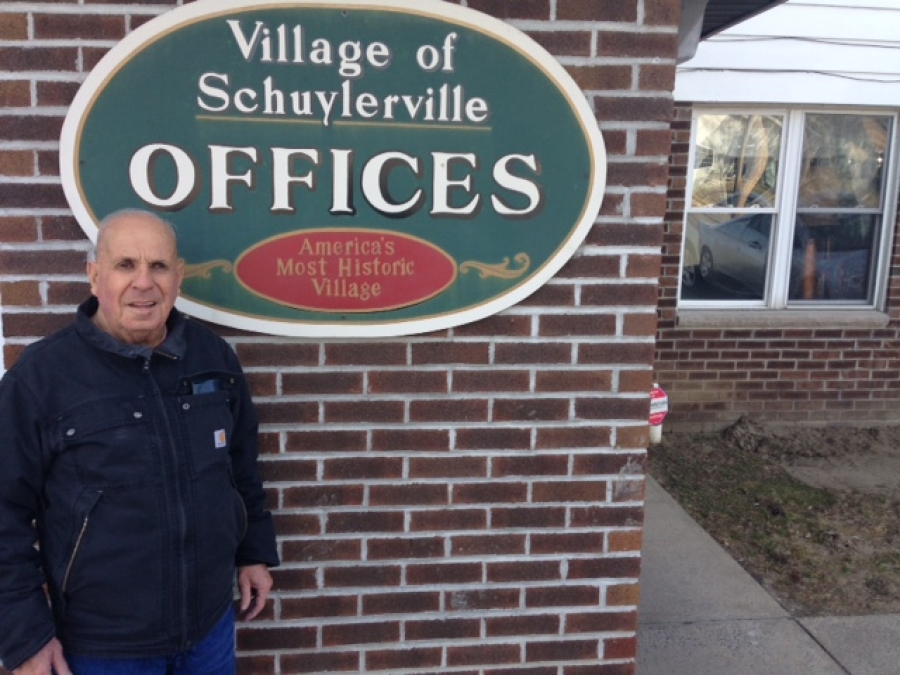 SCHUYLERVILLE – Mayor John Sherman was nearly a half-hour late to a meeting on a chilly Monday, but Deputy Clerk Rose Decker acted as if that were normal.

“I’m really going to miss him,” Decker admitted. “All the little things he does that people take for granted.”

One of those “things” is when Mayor Sherman leaves to pick up official village mail at the Post Office—despite the fact that he had agreed with a reporter to meet and discuss his final days as Schuylerville’s top elected official.

Decker said that Sherman had most likely encountered village residents who wanted to talk.

“We always seem like the bad guys,” Decker added, as she opened bags of candy for visitors to the village office in a familiar ritual. “That kind of sweetens it a bit,” she explained. The glass jar candy is only for village staff, while kids are free to take lollipops from a basket on the counter.

Sherman was first elected as Schuylerville mayor in 1977. He decided months ago to step down after the March 21 election. Candidates Dan Carpenter, a village trustee, and local restaurant owner Jason Young are competing to replace him.

Sherman said two main issues are bound to bear down indefinitely on whichever candidate wins. They have frustrated him for most of the last 40 years: village infrastructure and the weight of New York state mandates.

The new Schuylerville mayor “is going to have a hard time,” Sherman predicted. “Mayors are dropping out all over the place.”

For his $6,000 annual salary, Sherman figured he routinely puts in about 60 hours each week looking after village business. He calls himself a “full-time mayor.” In nicer weather, people honk their horns passing by Sherman when they see him mowing grass on village properties.

“I can’t sit still,” confessed the 77-year-old, noting that he will continue serving on the Saratoga County Advisory Youth Board as he has for many years.

On March 13, the Saratoga Town Board honored Sherman’s long service as mayor with a formal resolution. It observed that Sherman “demonstrates in his daily life the qualities and attributes which are highly desired and valued by our society.”

Above all, Sherman said, he will miss the ability to help Schuylerville residents in his official capacity. But he and his wife of 49 years, Martha, will not miss the late-night phone calls about the village’s ongoing infrastructure problems.

As a Hudson River village, Schuylerville is proud of its industrial past. Village Historian Kristina Saddlemire reports that Schuylerville played a key role in the country’s early clothing trade.

On the village’s website, Saddlemire points to the commercial success of Ellen Curtis Demorest, a famed garment designer and women’s rights leader from Schuylerville.

Today, though, Sherman says the village government has serious problems to solve with its aging water and sewer pipes—and perhaps with its very survival.

Sherman claimed that Gov. Andrew Cuomo and other state leaders are pressuring small villages like Schuylerville “to dissolve,” through such demands as sharing municipal services.

“Our governor isn’t helping small villages,” Sherman said. He described how costs are increasing the most for local taxpayers. “Where do you get your income? We have no place to get it anymore,” he added.

Schuylerville now has a modern sewage-treatment plant, whose construction was finished last year largely because of Sherman’s consistent advocacy for the project. He said the village had to take out a $12 million interest-free loan, payable over 30 years, to build the plant.

The Schuylerville budget—for a village of more than 1,300 residents and fewer than 10 employees—is roughly $1 million, Sherman said.

Through the years, Sherman and other local officials had many heated disagreements regarding the sewer plant’s construction. The village’s waste used to be pumped straight into the Hudson.

“Every thing we did with the sewer system was mandated,” the mayor said.

Schuylerville also has 7 miles of deteriorating sewer and water pipes that still need to be replaced, according to Sherman.

The infrastructure problems are made worse, Sherman continued, by a protracted legal dispute with Victory Mills. He claims that neighboring village is violating a contract with Schuylerville by refusing to pay a 22 percent share of the annual cost for the treatment plant.

“Nobody has listened to us at all,” Sherman said. “The only ones making money are the lawyers.”

Victory Mills operates its own pipes and pumps but it utilizes Schuylerville’s sewage-treatment system, Sherman explained. The current amount in dispute is about $200,000, he said.

“It’s awful,” Sherman said of the whole experience. He added that he hopes the new village government will conform to his firm negotiating stance in the Victory Mills court case.

“They owe us the money,” Sherman said.