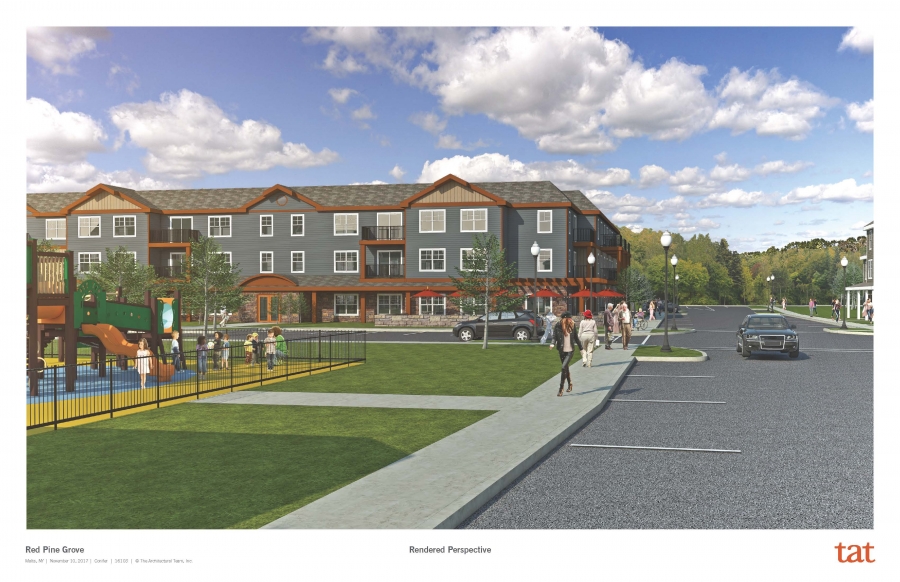 Matt Jones in his West Avenue office. Photos by www.photoandgraphic.com; and a rendering of the proposed Red Pine Grove complex in Malta, provided by The Jones Firm.

MALTA – The real-estate firm that is currently building 140 residential units at the intersection of East Line Road and Route 67 in Ballston is advancing a separate proposal with Malta town officials, involving 15 acres of property located off of Route 9 between Ellsworth Commons and Cramer Road.

Previously, town officials had approved plans for the Malta Crossings development on the same land, which included a hotel and residential units.

Conifer Realty, a Rochester-based company, has renamed its new proposal as the Red Pine Grove complex.

The property would be subdivided into two separate parcels of about two and 13 acres. The larger parcel would be mostly residential, and Conifer Realty currently has no plans to develop the smaller one near Route 9 due to the presence of archeological remains.

Matt Jones, the Saratoga Springs attorney representing Conifer Realty, said Red Pine Grove will be the “only workforce housing development in Malta,” similar to the firm’s Blue Heron Trail complex going up a few minutes west in the Town of Ballston.

Conifer Realty’s proposal in Malta calls for 12 three-story apartment buildings with a total of nearly 100 units; and a three-story “senior housing” structure close to Route 9 with 70 units, according to minutes of the June 20 Malta Planning Board meeting.

The firm also will build a senior clubhouse, a separate clubhouse for families, a maintenance garage, a sewer-pump station, and a storm water treatment area.

There will be a 144-foot “buffer” of trees to lessen any visual impacts on homeowners in the existing Cramer Woods neighborhood, according to the planning board.

In November, Jones and his associates appeared before the Malta Zoning Board of Appeals (ZBA) to request variances for eight-foot ceiling heights on upper floors of the senior building; and an increase in that building’s frontage length to more than 227 feet.

Both requests were denied by the ZBA, since Malta town code specifies nine-foot ceilings and a maximum frontage of only 120 feet.

The planning board is expected to consider Conifer Realty’s amended design plans again at a meeting scheduled for 6:30 p.m. on Tuesday, Dec. 19 in the town complex.

Jones said the firm is reviewing engineering aspects of the project and would submit a final site plan to the planning board for approval no sooner than January. Construction is expected to start in summer 2018, he added.

On Wednesday, though not required by town planners, a public forum was organized by Conifer Realty to hear concerns from local residents about the Red Pine Grove project. It was held at a similar property owned by the firm on Waite Road in Rexford.

Jones said a number of neighbors’ concerns were identified and that Conifer Realty planners will consider them as the proposal moves forward.

Mary Mahoney, a retired state worker and Luther Forest resident for 30 years, addressed the Malta Town Board on Monday, Dec. 4 after being granted the opportunity to do so by Supervisor Vincent DeLucia.

She criticized town officials for even considering the Red Pine Grove project and, in general, approving so much construction.

Many residents in Malta, Mahoney told the board, think town officials favor the profit motives of developers over the needs of long-term residents, without regard for proper planning, traffic impacts or light and sound pollution.

Most recent construction projects, she added, end up looking like “barracks” filled with people who “live on batteries.”

When DeLucia politely requested that Mahoney conclude her comments, she inspired a few chuckles in the room, saying: “I won’t bother you anymore on this subject if you change your evil ways.”