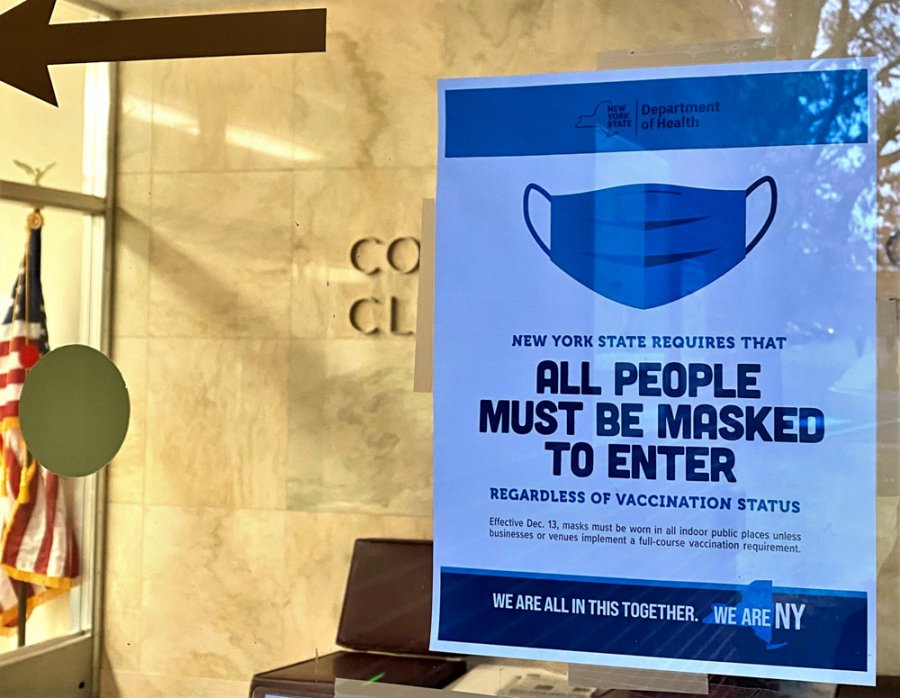 SARATOGA SPRINGS — Gov. Kathy Hochul announced last week that masks would be required to be worn in all indoor public places statewide starting Monday Dec. 13. Businesses and venues could alternately implement a vaccine requirement, and the action was directed to address the “winter surge” with COVID-19 cases and hospitalizations rising across the state, Hochul said.

On Monday morning, a great number of store windows fronting Broadway shops had been fitted with signs instructing all who enter to wear a mask.  Late Monday, Saratoga County Board of Supervisors Chairman Theodore Kusnierz, Jr. released a statement to say the county’s Public Health Department and law enforcement agency would not enforce “New York State’s misguided and unrealistic
mask mandate.”

“The best way to protect the health and safety of Saratoga County residents, families, schools and businesses is to continue to focus public health resources on rapidly providing booster vaccinations to the public, which our Public Health team continues to do,” Kusnierz said, in his prepared remarks.  “Asking already thin-stretched local health departments to enforce mask or vaccination mandates only detracts from this critical endeavor.”

Saratoga Springs City Supervisor Tara Gaston pushed back on the statement issued by Board Chair Kusnierz.

“While I admit that there are a number of issues with mask mandates, including concerns about possible violence against business owners and employees, I strongly disagree with the tone of the statement, and worry for its impact on our community,” Gaston said.  “There will never be a true account of the number of non-fatal losses, the businesses we’ve seen all over town, the domestic violence that our Sheriff and the DA have seen.”

Gaston praised the county’s public health department for their work and said while it should not be the priority of the health department to enforce a mandate, she took exception with the tone of the chairman’s statement, which did not come via an overall board vote, and created confusion among many residents and business owners who had reached out to her following the statement’s release late Monday.

“It should not be the priority of our public health department to enforce such a mandate…they are doing work that is far more important than doing that - but - it should not be the work of this Board of Supervisors to issue by any member, or the board as a whole, a statement that is inflammatory and indicates that the mandate or the law of this state will not be held in this county,” Gaston said Wednesday.

Board Chairman Kuznierz donned a mask at the start of the county’s monthly meeting on Dec. 15. All 14 other county supervisors in attendance wore masks, the majority of them kept in place throughout the meeting.

“Quite honestly you can still wear masks. We’re just not going to go out and fine people $1,000 for not wearing a mask or following the ‘unenforceable’ - using the words of our own governor – policy,” Kuznierz said during the meeting.

“Yes, masks benefit our residents, but there’s nothing that can protect our residents more than getting vaccinated and getting your booster shots,” Kuznierz said.

According to data provided by the county public health department this week, 74.5% people – approximately 170,000 of the county’s 230,000 residents – are considered fully vaccinated.