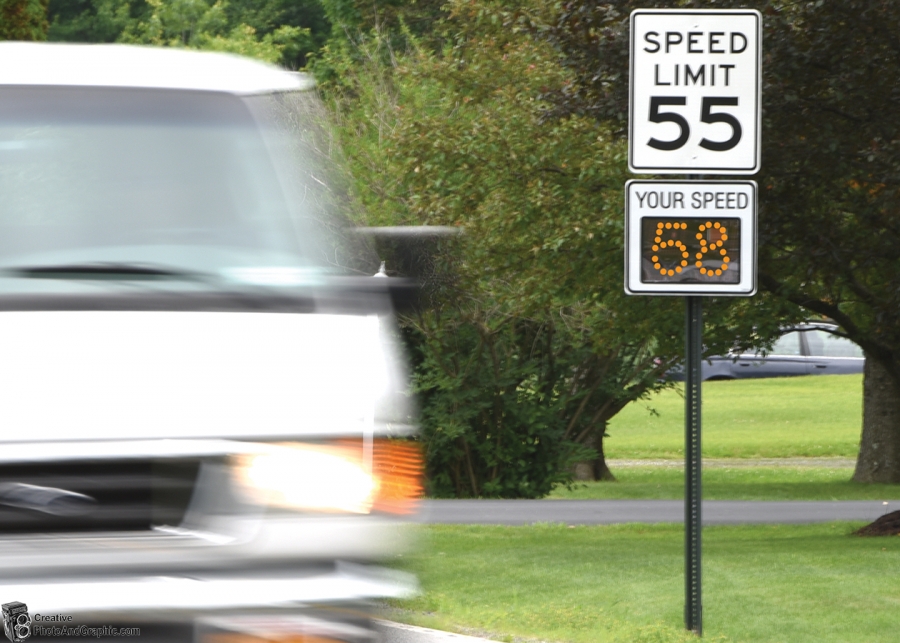 [In gallery photos, left to right: A fixed radar sign on Dimmick Road in Wilton, photo by www.PhotoAndGraphic.com; and a portable radar sign on Geyser Road, photo by Larry Goodwin.]

WILTON — They appear along roadsides more and more: digital signs that clearly reveal to drivers the extent to which they are violating posted speed limits.

“They do slow people down,” stated Councilman John McEachron in early June, as he and the other Wilton Town Board members were approving a purchase of two more of the radar devices at roughly $3,000 each.

Wilton Supervisor Arthur Johnson said the new units arrived this week, and that they will be placed on Smith Bridge Road. They get mounted to existing speed limit signs and alert drivers traveling in either direction, he explained.

Local drivers know Smith Bridge Road for a sharp turn that has seen its share of accidents through the years, often due to excessive speed. The roadway has a speed limit of 40 m.p.h. and two permanent warning signs with flashing yellow lights on either side of that turn.

Johnson said that land on Smith Bridge Road has been donated to Wilton. Plans are in the works to utilize the donation for modifying that hazardous curve, he added, possibly next year.

In his nearly 30 years of service in local government, Johnson admitted, he has not noticed a distinct rise in speeders—though he knows the radar signs help.

“It makes people at least pay attention to what the speed is...People have to respect” other motorists, he said, “and drive prudently.”

The police department owns a total of three portable units, two of which were situated recently in the city’s outer limits on Geyser Road and Hutchins Road. Both roadways intersect with Route 50.

Prestigiacomo said numerous complaints have been received about Hutchins Road in particular, which has a posted speed limit of 30 m.p.h.

Several months ago, after fresh snowfall had affected road conditions, an early morning accident claimed the life of a young woman on a woodsy stretch of Hutchins Road close to the spot where the city’s portable unit was placed.

In addition to capturing the speeds of passing vehicles, the equipment gives “very detailed data” about traffic patterns over time, Prestigiacomo said.

The portable units can be charged in a garage and they utilize solar power when deployed. If they run low on power, Prestigiacomo said, they tend to give inconsistent readings.

Without the appropriate traffic laws being passed, the sergeant explained, no tickets can be issued to drivers based on speeds recorded by the radar signs. He added that such laws are not likely to be passed “at any time in the near future.”

However, new legislation related to speedy drivers is being supported by officials in Malta, where a fixed radar device appears in a 30 m.p.h. zone near the town complex.

The bill, which is specific to the Town of Malta, would empower local officials to set lower speed limits on town roads and avoid a time-consuming process that is normally regulated by county agencies and the state Department of Transportation.

“It’s not law yet,” offered Malta Supervisor Vincent DeLucia, noting how the bill has not been signed by Gov. Andrew Cuomo.

The governor has until the end of the year to take action, according to Adam Kramer, a spokesman for Tedisco.

Many residents in Malta have pressured DeLucia and other leaders to address a growing problem of drivers speeding in several parts of town. “The traffic just goes too fast, there’s no question about that,” DeLucia said.

The supervisor voiced his concerns about speeders on Round Lake Road, Chango Drive and Ruhle Road in particular. He also expressed gratitude for residents who speak up, as well as the efforts of Tedisco and Woerner.

If the law gets signed and goes into effect, DeLucia explained, town roads would need to be “studied individually” with assistance provided by engineers. The town, he added, would not be able to “arbitrarily make decisions.”

“We still need to find out all the details and determine what the costs will be,” DeLucia said.