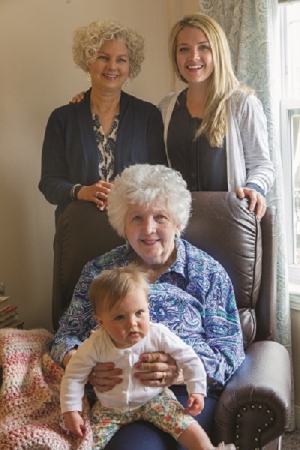 SARATOGA SPRINGS –Mother’s Day: a holiday dedicated to celebrating motherhood and the unconditional love (and life) our mothers gave to us. It’s a joy when we are able to spend the day with our mothers, allowing us to show them how much they are cherished and appreciated.

For Joan Hoeft, she feels the Mother’s Day love three-fold. Hoeft, who lives in Woodlawn Commons at the Wesley Community, gets to spend her special day with her daughter, Kris Mikeska, granddaughter, Meg Porto, and great-granddaughter, Lucia, who is just nine-months old.

“It’s a huge blessing,” said Porto, who just became a mom last summer. “Family is everything to us.”

This four generation family is incredibly close and stays busy by spending a lot of time together. Though Mikeska and Porto live further north, they make the drive down to Wesley at least three times a week to visit and do all their favorite things – from enjoying meals together to shopping on Broadway.

“It’s pretty cute when we go out – Mom has her walker and Lucia’s with her stroller,” said Mikeska. “We always have people stop and say how special it is that we’re all together.”

Over the years, Hoeft has taught Mikeska and Porto a lot about what it means to be a mom, handing down traditions and values her own mother taught her.

“My father died when I was just a baby,” said Hoeft. “My mother had to take care of me on her own. It was hard on her. She rented out all of our house but three rooms, which is where we lived.”

Hoeft helped her mom a lot when she was a kid, for example going grocery shopping on her bicycle because they didn’t have a vehicle. Through her mom, Hoesk learned the meaning of hard work and sacrificing for your child.

“They depended on each other,” added Mikeska. “They worked as a team. A mother-daughter team.”

Unlike her mom, Hoeft had the opportunity to be a stay-at-home mom, and Mikeska and Porto followed in her footsteps, making motherhood their full-time career.

“I’ve definitely learned my values from them,” said Mikeska about her mom and her grandmother. “Values like honesty and always being there for each other. Family traditions are huge for us. It’s all about being together.”

Porto feels the same way, knowing that if she has a question about being a new mom, she can always rely on her mom and grandmother for help.

“It’s very reassuring that if I don’t have the answer, one of them will,” said Porto. “From day one, I have always felt so supported. All of their advice is something I truly take to heart. It’s not always spoken either; I’ve learned so much by their example.”

This will be Porto’s first Mother’s Day with her daughter Lucia in the family; it will be a true celebration of a family’s growing legacy.

“Mother’s Day just makes you feel good – it’s a celebration of having children,” said Hoesk, looking lovingly at her great-granddaughter cooing in her granddaughter’s lap. “The most rewarding part is when they keep growing up, then they get married, then they have babies of their own, and you just feel a part of it all. I wouldn’t have it any other way.”

More Than Just A Great Race!

In Its Tenth Year, The Saratoga Palio Has Become A Community Happening.

SARATOGA SPRINGS – If you wanted to show someone an example of how this community comes together for great causes, and how that commitment grows over time, take them to Downtown Saratoga Springs on the morning of Sunday, September 20. At Ellsworth Jones Place near the City Center just before 8 a.m., they will witness the spectacle of over 2,000 runners, of all ability levels and from all over the region and nation, taking off on two races – a 5K that sweeps through the city, and a half-marathon (13.1 miles) that cascades through Spa State Park.

The races themselves are an achievement – in its tenth year, The Saratoga Palio: Melanie Merola O’Donnell Memorial Race has exponentially grown in its participation (from about 400 runners in 2006). But the real impact comes from the good it does for the community, as well as from the community outward.

The Saratoga Palio is the most significant fundraising effort of The Melanie Foundation. This Saratoga Springs-based foundation was formed in 2006 to honor the life and legacy of Melanie Merola O’Donnell, who passed away at age 33. Melanie lived a life of giving, focusing her career on relieving suffering inflicted by mental illness. As The Saratoga Palio has grown, it has enhanced the ability of the Melanie Foundation to expand its support via scholarships awarded to aspiring mental health practitioners, in recognition of their dedication to community service in a manner that reflects Melanie Merola O’Donnell’s values of compassion, generosity, respect and commitment to others.

In 2015, three scholarships will be awarded, including one to Tabitha Dunn of Ballston Lake, who is pursuing doctoral studies at Springfield (MA) College. Other recipients are Stefanie Landau of Philadelphia, PA, and Melissa Smigelsky of Memphis, TN.

But while The Melanie Foundation’s scholarship winners can come from everywhere, their commitment to our local area is consistent. Since 2009, the have designated (see sidebar below) a local not-for-profit to receive a portion of the Saratoga Palio’s proceeds. This year’s recipient is The Saratoga Center for the Family.

“We not only support the scholarship winners and the local charities,” said The Melanie Foundation’s Scholarship Chair Colleen Sanita, “but also the many runners who set the goal of completing a race like a Half Marathon for the first time, and train for it all summer to run in The Saratoga Palio. This perseverance is another way we keep Melanie’s spirit alive.”

The races themselves are the centerpieces of an entire weekend of activities suitable for the entire family. On Saturday, September 19, race participants can pick up their registration materials from 10 a.m. to 3 p.m. at the Hampton Inn (25 Lake Avenue), and everyone can view an exhibition that features vintage Saratoga Palio gear and informational displays from Arbonne, Bondi Band, National Running Center, Saratoga Boot Camp and The Melanie Foundation.

Congress Park is much more than just the races’ finish line on Sunday. Interspersed between the 5K and Half Marathon award ceremonies are two heats of a popular Kids Fun Run (registration is that day). This is all followed by a big community celebration, sponsored by Druthers Brewing Company, that has all the elements: food, drink and activities for everyone in the family, plus music by three top area bands: Sugar Pill, High Peaks and The Remainders.

Whether you decide to run or cheer, participating in The Saratoga Palio: Melanie Merola O’Donnell Memorial Race in its tenth renewal is something in which everyone in the community can take pride.

For more information, to volunteer, or to register for The Saratoga Palio: Melanie Merola O’Donnell Memorial Race on September 20, visit www.TheSaratogaPalio.com. Course maps and itineraries, as well as details of the weekend activities are also available.

In 2009, The Melanie Foundation began giving back to the community through charitable donations, and as the Saratoga Palio has grown, so have the contributions. This year the foundation will give to the Saratoga Center for the Family.