Officers from the Saratoga Springs Police Department (SSPD) responded to Hathorn Blvd, just about one and a half miles away from Geyser Road Elementary School. The police were notified around 8:30 a.m. that a man (later identified as Koren) was harassing a paving crew working on Hathorn Blvd.

Meanwhile, at the scene, the paving crew had directed the responding officer towards the back of a home on Hathorn Blvd. According to SSPD, Koren was observed to be pointing a weapon at two men in the backyard. The responding officer attempted to control the situation with verbal commands, which went ignored as Koren leaped over a fence.

“Once we get enough cops there, we start doing a search for him. We find the gentleman hiding in some bushes on Tiffany Place at a home there. He does not have the handgun on him at that point,” said Investigations Lieutenant Bob Jillson.

After a thorough search, the officers find the handgun matching their description under gardens near the spot where he was apprehended. The gun was later identified to be a stolen, and fully loaded .38 caliber revolver.

There was a strong police presence at the Geyser Road Elementary, where the school lockdown turned into a lockout once the school board was notified that the suspect was apprehended.

Faculty and staff were at the front of the school greeting the students when the buses arrived. At 10:16 a.m. the pledge of allegiance came across the loudspeaker, as the school continued with their day. 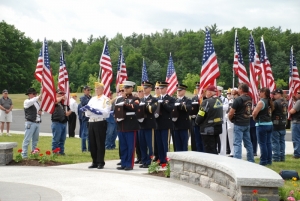 To Honor & Serve: A Fallen Soldier's Legacy Helping Kids to Get Fit

SARATOGA SPRINGS – As the country’s collective waistline continues to expand, the need to educate younger generations to make smarter decisions becomes more and more important. According to the Center for Disease Control and Prevention, approximately 12.5 million children between the ages 2-19 are considered obese. Whether it’s the lack of physical education, the increase in availability of processed foods packed with calories and sugar or the rise of television and video games as a pastime activity; learning to live healthy is something you should learn sooner rather than later, in hopes to carry those habits with you for the rest of your life.