Fairy Tales in ‘Toga: An Exclusive Evening of Films at SFF 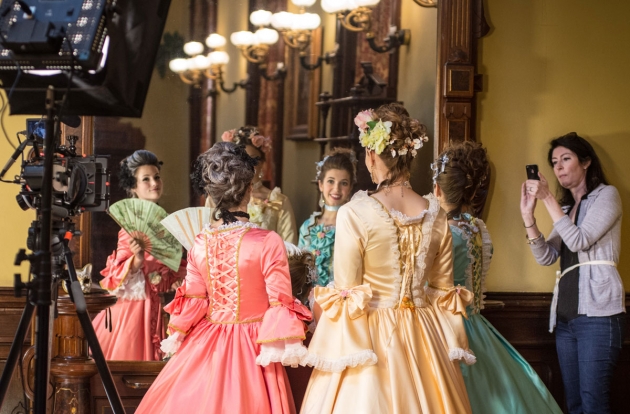 SARATOGA SPRINGS – Local filmmakers are collaborating with the Saratoga Film Forum for an exclusive “Meet the Filmmakers” evening event on Saturday, October 17.

Director/screenwriter Nicole Coady of Ballston Spa and Director of Photography Marty Hardin of Troy are partnering to produce a retelling of the classic Brother’s Grimm fairytale, “Twelve Dancing Princesses,” which they plan to begin shooting in 2016. The trailer for the movie was filmed in and around Saratoga Springs, where Coady wants to shoot the entire film.

“Saratoga feels like a fairy tale to me. So it’s the perfect location to actually shoot the film,” said Coady. “It will cost more to film here; that’s why our Indiegogo campaign is so important.”

Coady and Hardin are raising funds for the new film through Indiegogo, a popular crowdfunding engine online. They estimate they will need $1.8 million to complete the film, which is small change for Hollywood, but a big sum for independent filmmakers.

The movie trailer and Indiegogo campaign launch will preview at Saratoga Film Forum on October 17, at 7:30 p.m.

“We are premiering our trailer at this event because we want our community to be a part of our filmmaking journey,” Coady continued. “We are 100 percent invested in making this film a success, but we can’t do it without the support of our fans and our community.”

In addition to the exclusive preview of the “Twelve Dancing Princesses” trailer, the party will feature finger foods and a cash bar, as well as a one-time only screening of “La Belle et La Bête,” the brilliant 1946 French film adaptation of “Beauty and the Beast” by Jean Cocteau.

“Coady’s film and ‘La Belle et La Bête’ are quite different from the animated versions that our patrons may be familiar with,” said Carol Maxwell, Saratoga Film Forum president. “This is a very old tale that explores classic themes: internal versus external beauty, and the redemptive power of love. We rarely show older movies, but this film is significant, and we are honored to screen ‘La Belle et La Bête,’ especially in collaboration with these filmmakers.”

“Our patrons love independent films. This event provides our community a chance to get to know rising filmmakers, and to dig deeper into the significance of this classic story,” Maxwell concluded.

Tickets are $10 online and $11.50 at the door, and include admission to the launch party, an exclusive viewing of the “Twelve Dancing Princesses” trailer, plus the viewing of “La Belle et La Bête.” Doors open at 6:30 p.m., with the launch party beginning at 7:30 p.m.

For more information, or to reserve tickets online, visit 12dancingprincessesfilm.com/events/.

More in this category: « “Pearls before Swine” Cartoonist Visits Northshire End Hunger, One Step at a Time »
back to top