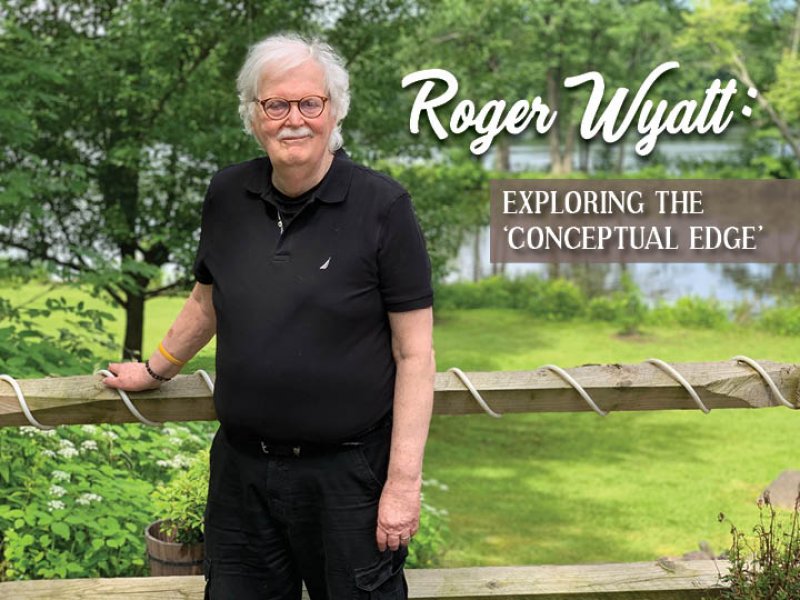 Roger Wyatt traces his love of film back to the night in 1951 when his parents took him to a drive-in in to see Gregory Peck in Raoul Walsh's great film, "Captain Horatio Hornblower."

Up to that point, Wyatt would produce drawings of peaceful pastoral scenes, his mother told him. "After that, she said, “my drawings were full of explosions and soldiers on the move. Something about film clearly spoke to me at an early age."

Seventy or so years later, it still does. Wyatt describes himself as "a maker of handmade media in a mass media world." He's not only a filmmaker, but also a writer and  photographer. Over the course of his long career, he also has been a professor, a university administrator, and a consultant.

"All of my life, I've sensed that the really important events and people emerged seemingly from out of nowhere," he says.

"While the things I've planned were often important, it's the unplanned things that have emerged seemingly out of nowhere that have really shifted my direction. I went to Columbia intending to be a historian and came out a filmmaker."

Wyatt started in radio, when a friend asked him to discuss military history on the Columbia student radio station, WKCR.

"From the moment the red recording light went on in the studio, I was swept away into a new world. It changed my life."

Amazed by the technological marvel of the radio and all the bells and whistles that accompanied it, Wyatt became a self-defined reporter. Over the course of his career he has covered Beatles and Rolling Stones press conferences to interviewing George Lucas. By the time graduation arrived, he was heading into filmmaking. He liked the creative atmosphere offered at universities, and so he went the academic route through several positions including William Paterson College, Teachers College, Columbia University, and the library school at Queens College before joining the School of Library and Information Management at Emporia State University.

In the 15 years he spent there, Wyatt established a reputation for forging new paths with innovative media projects.  One was a video satellite course on information technology that featured national leaders in information technology as faculty. Another was the staging of a live two-way intercontinental webcast between Warsaw and several sites in the Midwest.

"We do these routinely today -with apps on our phones- but back in the 1990s this was like crossing a talk radio show with a missile launch."

Wyatt kept following his curiosity until a clear vision and path appeared. Moving to the Saratoga area in 1998, he established BBH Digital Film Productions. Coming out of a period of great reflection after the death of his second wife in 2009 he started making films that spoke to his own sense of artistry rather than the communications needs of clients. Throughout his career he has had an extensive freelance production consultancy that has included filming for a month in a Buddhist monastery on the coast of Ireland, and making films celebrating the works of Puccini and Mozart.

Since 2011, Wyatt has been developing a micro-budget feature and streaming series he has titled, Life on the Run. It asks the question: Why do art?

"The short answer is that you must, but that’s easier said than done because you will be reinvented by means of a journey through fear, uncertainty, and doubt," he says. He describes the work as a "guided improv performance filmed with cinema vérité techniques" that's "filled with magical reality and enigmas."

“I just really wanted to make a film about something that mattered to me," he says. He has shot scenes at the Emma Willard School, Caffe Lena, The Egg, and an alley in Glens Falls, among other locations locally as well as nationally including NPR studios in Washington, DC and Griffith Observatory in Los Angeles.

"I seek the extraordinary in the ordinary," he adds.

As a director, Wyatt's approach is to explain to his actors what the scene is about and how they should feel, and then just let his multiple cameras roll. Despite a battle with cancer that started in 2015 and the loss of vision in his right eye, Wyatt is still going strong and says he'll soon be able to share a rough cut with friends and the community of actors and others he has engaged with in the film's production.

“Life On the Run” is a "research project," he says, explaining his concept of paradigms and how he's waiting for the next big shift to occur in his relationship with art or for another crazy technological light bulb to pop into his head.

"I have an open heart and high tolerance for ambiguity," he says. "They serve me well as an interdisciplinary border-crosser and seeker of innovation. I'm more comfortable on the conceptual edge than in the dogmatic center.”
The SMARTACUS Creative Group is a student-driven creative agency dedicated to supporting the economic development of Upstate New York. Dan Forbush is its publisher. Quinn Jones was a senior in Jill Cowburn's journalism class at Saratoga Springs High School until his graduation last month.
Read 982 times

More in this category: « Robert Manasier: An Entrepreneur’s Focus on Getting Things Done Todd Shimkus: Bringing Together The Best and the Brightest »
back to top