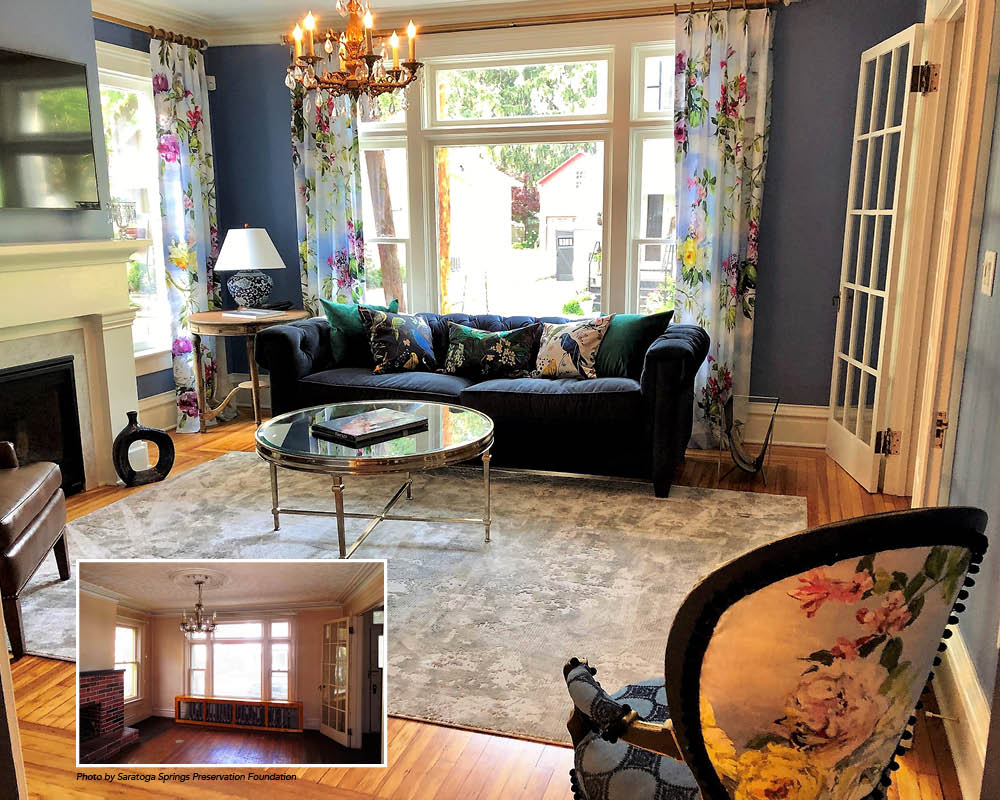 After two category five hurricanes destroyed their house in Saint Thomas in September 2017, Kasia and Adam Israel needed to find a new place to call home.  They decided to return to where Adam was born and raised, Saratoga Springs.  Unlike his other family members – mother, father, brother, and sister  –  Adam and Kasia were not inclined to rehabilitate a historic house. “We were looking for a brand-new condo; we were not looking to buy an old house,” shared Kasia.  However, that all changed when their realtor Lisa Licata talked them into looking at 184 Spring Street, a three-family house.  “It had a magnetic feel – as if we were meant to return it back to a single-family residence. It felt like the right place for our family to start over,” said Kasia.

After seeing the house in December, they purchased it.  Immediately upon closing, Kasia and Adam ran into the house with a hammer to see if there was a hidden fireplace in the dining room as the wood floor design indicated.  Unfortunately, there was not.  “However, the sons of the previous owner – Brian, Joseph, and Michael Maiorella – left a beautiful bouquet of flowers for me, a toolbox for Adam, and a Slinky and Playdough for the kids as well as a beautiful letter to our children, Kai and Hannah, wishing them well in making as many wonderful memories in the house as they had,” smiled Kasia.  Although the sons had received multiple higher offers, they accepted the Israels’ offer because they wanted a family in the home.

The brick Italianate house was built in 1867 by John Freeman, a brick mason, and Susan Freeman.  The Freemans lived in the house with their daughter, Ida, until 1884 when they relocated to 127 Matilda Street, today known as Woodlawn Avenue.  The house was rented to others or vacant until 1890 when Susan passed away.

That year William H. McCall, an attorney, and his wife Mary purchased the house. They only lived there until 1893 when they sold it to Walter S. Fuller, a bookkeeper and cashier at The Saratogian. For a period of time, he lived at the house and resided at 160 Phila Street in the summers until he moved there permanently in 1908. During that time, he rented the house to Albert Platt, an instructor of the Organ and Theory Department at Skidmore School of Arts. It was during Fuller’s ownership that the one-story full-width front porch was extended to wrap around the east side of the house and the second story was added to the rear extension.

In 1923, Frederick and Agnes Eaton purchased the house. Frederick was a physician and surgeon, who later was the county coroner. Upon moving into the house, Frederick moved his office to the residence. This is most likely when the one-story addition with a separate entrance was made to the house.  The Eatons lived there with their four children.

In 1954, Frederick passed away. It is at that time that William J. Hickey, a physician and county coroner, moved his office to 184 Spring Street.  Agnes continued to live in the house until 1967 when she sold the house to the Congregation of Sharra Tfille.  Hickey no longer had his physician’s office at 184 Spring Street and Rabbi Sheldon Steinberg resided in the house.  In 1971, the property was sold to Abe Heifetz, who did not live at the property.  In 1977, Phillis “Savta” Maiorella purchased the house.  Most likely, the house was made into three apartments during her 40-year ownership.  It was upon her passing that Kasia and Adam acquired the house.

Phillis often commented how blessed she was to have wonderful neighbors.  Kasia and Adam have had the same experience during the short time that they have owned the house.  “The neighbors welcomed us to neighborhood. They have been so patient and understanding with the construction and, more importantly, they offered many words of encouragement and appreciation of the work we have done to restore the house,” shared Kasia.

The house required extensive work, which was costly.   “You name it, we had to do it – fix the roof; repair walls, windows, and doors; install new electrical, plumbing, HVAC, and insulation; remove a structurally unsound addition and reconstruct it; design and install a new kitchen and bathrooms; and refinish the floors.  Working with the Saratoga Springs Preservation Foundation, we were able to secure New York State Historic Homeowner Tax Credits to offset the cost, which was critical for us to undertake this project,” said Adam.

Bonacio Construction was the general contractor.  “James Ackerman and Amanda Santy of Bonacio were so great to work with on the project and Erika Gallagher of Plum and Crimson Fine Interior Design Studio was able to take my vision and make it into a reality.  We were so fortunate to work with so many great people, Michael Bannon of Signature Cabinet Group and Nicole Stalk at Curtis Lumber, as well as local businesses throughout the process – including Earl B. Feiden Appliances, Irish Drywall, Capital Stone, Lance Plumbing, Towne TV, Sherman Tile, and Best Tile,” shared Kasia.

“We are so grateful to our family – my mom Ronne Israel and my sister Elizabeth Israel and her husband David Hayden who always opened their home to us whenever we needed it during construction and to my dad Robert Israel and his wife Monna for the amazing support and countless advice they provided during the process,” said Adam.

“We didn’t know we had it in us to rehabilitate an old house when we started our search for our new home.  While it had its challenges, I’m so glad we did it!  I love the historic details that we were able to preserve, making it a special place to raise our children and our newest members of the family – Maf and Olie, two rescue mix beagles that are named after the family-owned boutique hotel and restaurant in Saint Thomas, the Mafolie, that we operate,” beamed Kasia.

In May of this year, the Israels opened the house as the “Rehabilitation in Progress” for the Annual Historic Homes Tour hosted by the Saratoga Springs Preservation Foundation, giving the public the rare opportunity to see the house under construction.  The Israels are once again opening their home to the public.  Don’t miss the opportunity to see this amazing transformation at the 2019 Showcase of Homes in September!

More in this category: « The Long View: What we focus on becomes our reality. Words of Wisdom from a 93 Year-old Student »
back to top