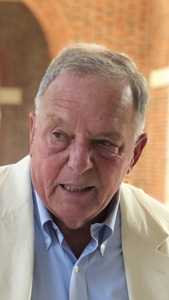 SARATOGA SPRINGS — Dr. Thomas Richard Kershner, 79, passed away peacefully surrounded by his family on June 19, 2021 at his home in Saratoga Springs. He was born on March 8, 1942 in Detroit, MI.

At age eight Tom was bedridden by polio, and in isolation he developed a love of books and knowledge that would go on to shape his future. As a student, he started at Eastern Michigan University. He finished his education with a master’s and PhD in economics at Harvard University. During his time at Harvard, he was a teaching assistant to John Kenneth Galbraith. Tom’s dissertation became an early and important book in econometrics for the emerging analysis of Japanese trade between Southeast Asian countries.

Tom started his career as an Assistant Professor of Economics at Union College, became a full professor, and eventually chaired the department. He was beloved by his students, who inducted him into Phi Gamma Delta (FIJI), one of the few faculty members asked to join a fraternity at the time. During his tenure at Union, he became interim Director of Athletics. During this time Tom was instrumental in fundraising for the creation of Achilles Rink.

On Saturdays he would often go to the Albany Pork Store in Schenectady for cold cuts, and on Sundays he would bake several loaves of bread and invite students over for study sessions. Few could resist his good nature, intelligence and homemade bread. Tom was beloved by his students, many of whom went on to careers in academe, finance, and investment management. Former students of his do not hold back on their accolades — Tom was an inspiration and mentor.

Together with two Union College colleagues, Tom Kershner’s second act was shifting his intellect from academia into business, starting an economic forecasting company called Kennerman Associates in 1979. During this time, he stood up for the voiceless as an expert economic witness, determining economic loss for the deceased or injured and their families throughout the country, including some victims of 9/11.

In the 1980s the business was expanded into investment management. In the late 1990s, Tom brought on another business partner, Christopher Grosso, and later renamed the firm Kershner Grosso & CO. In addition to his work as an expert witness, Tom helped improve the fortunes of financiers and farmers alike and made financial advising a noble profession.

Tom served on the Antioch University Board of Trustees in the early 2000’s. Following his term there, he served on the Boards of Warren-Washington Counties Industrial Development Agency and Adirondack Community College. In 2012 Tom joined the Hudson Headwaters Health Foundation Board and remained active with them until his passing.

He enjoyed deep conversations with thoughtful people: anyone committed to their craft or profession, or anyone interested in learning or curious about the world. An avid reader, he was never far from a newspaper, magazine or a book. He was a member of the Saratoga Springs, Old Forge, Glens Falls, St. John USVI and Naples, FL libraries. His wealth of knowledge was respected by all who knew him.

Tom was known for his quick wit and dry sense of humor. He felt it was through grit and determination that he overcame adversity and succeeded. When asked the secret to his success he would say, “Success is where preparation meets opportunity.” The countless people whose lives he touched for nearly eight decades are better off because he lived, and a little sadder now that he is gone.

A celebration of life for family and friends will be held on July 8. In lieu of flowers, donations can be made in Tom’s name to the Saratoga Springs Public Library, 49 Henry Street, Saratoga Springs, NY 12866.

More in this category: « Barbara W. Sutherland Elizabeth Ruvolo Pabst »
back to top