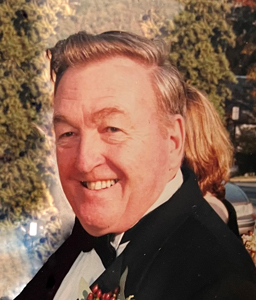 ALBANY — John Wallace Loonan “Wally,” 88, passed away peacefully and comfortably, on Sunday, Sept. 19, 2021, surrounded by his family at Albany Medical Center from complications due to a fall earlier that week.

Born in Albany in 1933 to Ethel (Wallace) and Thomas Loonan, Wally was the younger brother of Thomas (Tommy) Loonan (died 1971). After attending Catholic and public schools in Albany, Wally entered the Air Force and served in the Korean War as a Senior Airman and later as a lineman in Tokyo as part of the post-war rebuilding efforts.

After returning from Japan, Wally worked for Western Electric and then made his way to Lake George where he worked as a bartender for over 40 years, a near-permanent fixture at The Montcalm Restaurant. Many regular customers became lifelong friends. Upon retirement from The Montcalm, Wally worked as a court officer at Warren County Courthouse for many years; he was a member of the American Legion and served on the board of the Caldwell-Lake George Library. Wally was a longtime, active member of Sacred Heart Church.

A man of few words and endlessly with a book in his hand, Wally was a consummate reader of history and was encyclopedic in his knowledge of WWII and the French and Indian War. Wally always had a captive audience in his family who never tired of listening to stories of old Albany and his adventures in Asia during the war. He had a soft spot for cats, crossword puzzles, well-polished shoes, old school manners, time at his brother-in-law’s hunting camp in the Adirondacks with his son, grandson, and nephews, long car rides with his beloved wife, Jan, mostly to Dorset, Vermont, and baking. Wally’s apple pies were renowned to all who had the good fortune to share one, as well as his famous chocolate chip cookies and delicious key lime pies.

He will be sorely missed by all who knew him.

He leaves behind his beloved wife of 55 years, Janet (Groebler) Loonan, a daughter, Shane (Jamie Williams-Ness) and son, Sean (Jodi Charlton Loonan), and three grandchildren, Mercedi, Wallace and Adeline and many dearly loved sisters and brothers-in-law, nieces, nephews, and friends.

The family is sincerely grateful for all those at Albany Medical Center I.C.U. who made it possible for Wally to be with his family at the time of his passing.

A Mass of Christian Burial will be celebrated 11 a.m. on Friday, October 1, 2021 at Sacred Heart

In lieu of flowers, please consider making a donation to the Caldwell-Lake George Library, or an organization of your choice in Wally’s honor. For those who wish, on line condolences may be made to the family by visiting www.sbfuneralhome.com

More in this category: « Rick Dunn Mary Eichorst Max »
back to top