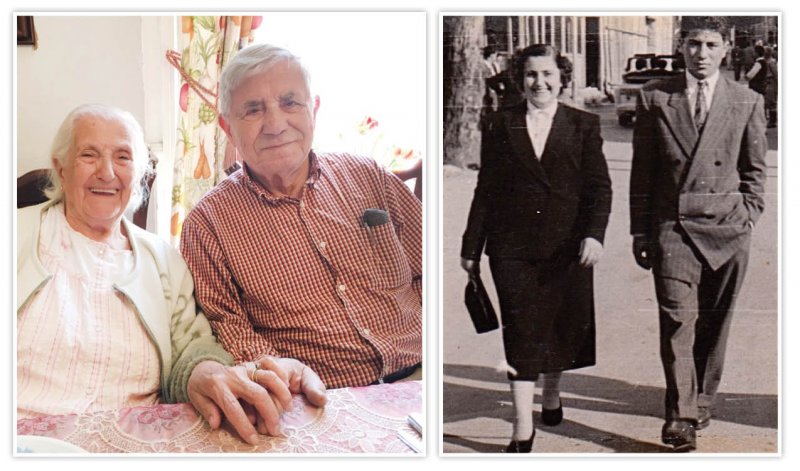 Nazha and John left their home in Lebanon to provide their new young family a better life. After they married, John & Nazha with baby Hasna traveled to Caracas, Venezuela in South America in search of work. They quickly added Theresa, Anthony & Janette to their family tree. But their ultimate dream was to make North America their home.

Just as their hopes dwindled of ever getting that opportunity to go to the U.S.A., John received notice that he would be allowed to enter into the U.S. and work, but Nazha had to sail back to Lebanon with her four young children to await her opportunity to join him.

A year later, John sent for Nazha and their four children who traveled by the Italian ocean liner.

In 1969 as naturalized citizens, they cemented their roots in the U.S. by adding their fifth and final child Mary Rose.

Both were laborers who worked well into their senior years. Without any formal education Nazha was able to work as a seamstress for Cluett, Peabody & Co., (Arrow shirts), the Marvin & the Jacobs Manufacturing Corporations and lastly after retirement, Comfortex. John found employment with Cluett Peabody & Co., Holiday Inn and CDTA.

Nazha & John also owned Edna’s, a Mom & Pop’s neighborhood grocery store along with multiple apartment buildings where they supplied neighbors with many years of service, affordable housing & even some home cooked meals. It was a place of gathering in the North Central community of Troy. They also sponsored and housed many immigrant family members and friends who also had the dream to make America their home.

They have five children, seven grandchildren and three great-grandchildren. Nazha’s faith to Jesus, our Virgin Mary and the Maronite-Catholic religion for her entire life has guided her and given her strength throughout her almost 94 years of living.

At this time when so many families are struggling and unable to be with their loved ones, our family felt it was still important to acknowledge the hard fought challenges of life and to recognize their 70 years of marriage.

Sumbitted by Janette Kaddo Marino. Contact This email address is being protected from spambots. You need JavaScript enabled to view it..

Read 1044 times
More in this category: « Seniors Deserve Five-Star Treatment Moving in the Right Direction »
back to top